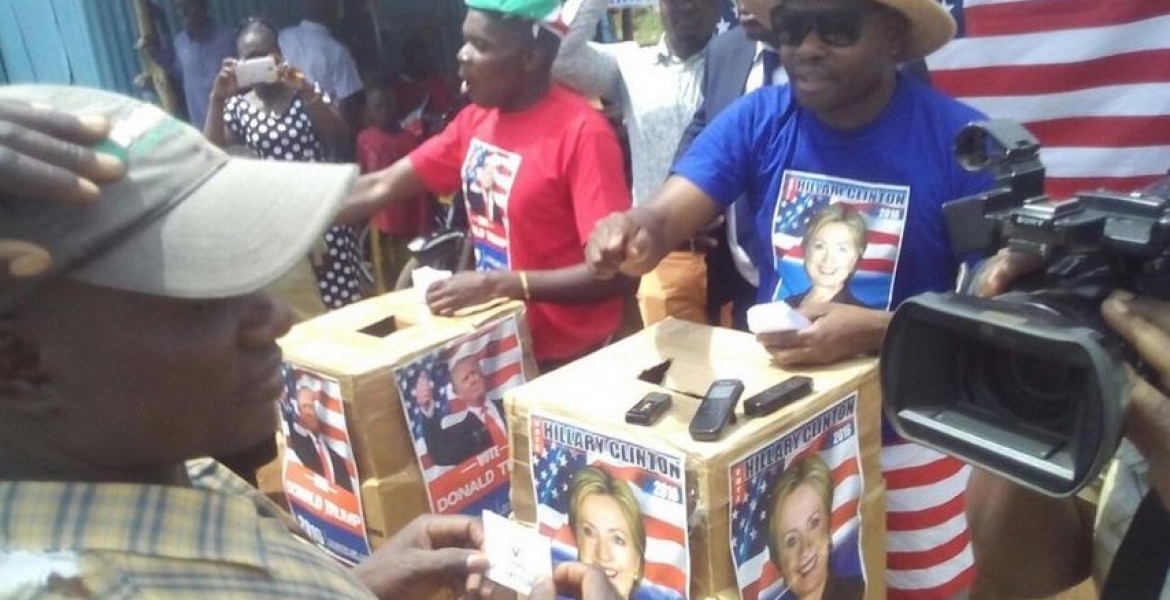 Democrat Hillary Clinton has been declared the US President by Kenyans living in Kogelo, Siaya county, which is Barack Obama’s village.

Residents conducted a mock poll in which Clinton emerged winner after garnering 78 per cent votes against Republican nominee Donald Trump’s 22 per cent.

Lining up carrying white papers on their hands, the residents enthusiastically cast their votes in two boxes branded with Trump’s and Clinton’s images.

Residents chanted Clinton’s name, saying they were supporting US President Barack Obama’s choice. They also urged participants not to rig.

“Do not rig the elections … No rigging in the polls … Clinton is winning … She has to win … The election is free and fair,” they shouted.

Kogelo was also hit with the elections fever in November 2012, when residents said they hoped Obama would be re-elected.

The village, which is the home of Obama’s father, was a beehive of activity as hundreds of visitors camped at the home awaiting the outcome of the vote pitting Obama and Mitt Romney.

Obama has been campaigning with Clinton but his half-brother Malik said he will vote for Trump in the election taking place today.

Malik, a US citizen, has lived in Washington since 1985 where he worked with various firms before becoming an independent financial consultant.

He said he dislikes Clinton and was unhappy with his brother’s leadership.

The man who is in his 50s said he supports Trump’s policies, especially his focus on security.

“He appeals to me and I think he is down to earth and he speaks from the heart and he is not trying to be politically correct. He’s just straight-forward,” he said.

With hours to go before Americans vote, Clinton has about a 90 per cent chance of defeating Trump in the race for the White House.

This is according to the final Reuters/Ipsos States of the Nation project released on Monday.

Her chances are roughly similar to last week’s odds, and any upset by Trump on Tuesday depends on an unlikely combination of turnouts of white, black and Hispanic voters in six or seven states.

The former secretary of state was leading Trump by about 45 per cent to 42 per cent in the popular vote, and was on track to win 303 votes in the Electoral College to Trump’s 235, clearing the 270 needed for victory, the survey found.

In a battle centered largely on the character of the candidates, Clinton, 69, a former secretary of state and first lady, and Trump, 70, a New York businessman, made their final, fervent appeals to supporters late on Monday to turn out the vote.

Their final week of campaigning was a grinding series of get-out-the-vote rallies across battleground states where the election is likely to be decided.

Kogelo Declares Clinton US President after Mock Election Reviewed by samrack on November 8, 2016 .

Kogelo Declares Clinton US President after Mock Election Democrat Hillary Clinton has been declared the US President by Kenyans living in Kogelo, Siaya county, which is Barack Obama’s village. Residents conducted a mock poll in which Clinton emerged winner after garnering 78 per cent votes against Republican nominee Donald Trump’s 22 per cent. Lining up