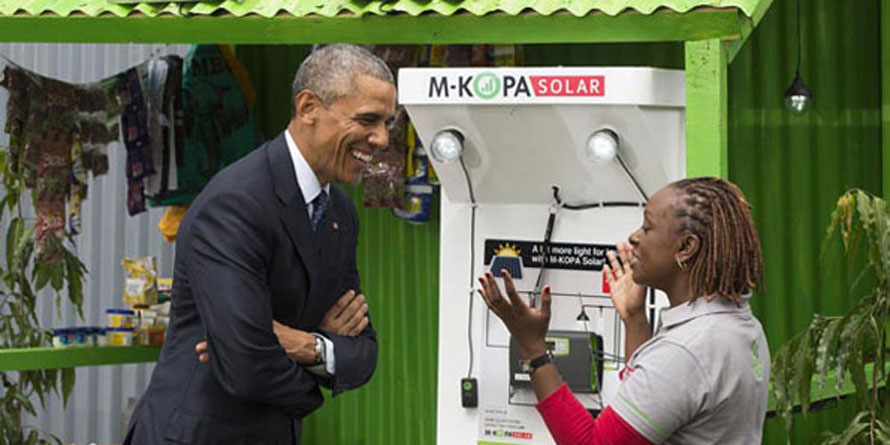 US PRESIDENT BARACK OBAMA WHEN HE VISITED THE M-KOPA STAND AT THE POWER AFRICA INNOVATION FAIR IN 2015 ON THE SIDELINES OF THE GLOBAL ENTREPRENEURSHIP SUMMIT IN NAIROBI. FILE PHOTO

M-Kopa, a solar energy firm, is among the world’s top 50 smartest companies in the world, according to a ranking by Massachusetts Institute of Technology (MIT).

The firm, which made its first appearance on the coveted list, was placed in position 34 ahead of  e-commerce firm Jumia (44), multinational tech giant IBM (39), social media firm Snap (48), Daimler (46) and Adidas (38), which was featured in the list for launching a “robot-intensive microfactory” in Asnbach, Germany.

M-Kopa sells solar home systems to low-income earners by allowing them to pay in instalments over a year through mobile money.

By the end of April, the firm had connected half a million homes in Kenya, Uganda and Tanzania with its M-Kopa 400 system.

The firm had also sold 50,000 solar TV systems and had completed 150,000 customer upgrades for products and services.

The MIT technology review compiles the list annually, which puts together the top 50 companies that “combine innovative technology with an effective business model.”

“There have always been large companies and outright monopolies, but there’s something distinctive about this new generation of what some economists call superstar companies.

“They appear across a broad range of business sectors and have gained their power at least in part by adeptly anticipating and using digital technologies that foster conditions where a few winners essentially take all,” said MIT technology review editor David Rotman.

“Our annual list of the 50 Smartest Companies includes many of these firms, but it’s not merely a list of today’s biggest or most profitable players. It highlights technologically innovative companies whose business models allow them to exploit these advances.”

US PRESIDENT BARACK OBAMA WHEN HE VISITED THE M-KOPA STAND AT THE POWER AFRICA INNOVATION FAIR IN 2015 ON THE SIDELINES OF THE GLOBAL ENTREPRENEURSHIP SUMMIT IN NAIROBI. FILE PHOTO   Kenya’s M-Kopa on MIT’s top 50 smart firms list M-Kopa, a solar energy firm, is among the world’s top 50 smartest companies in the world,