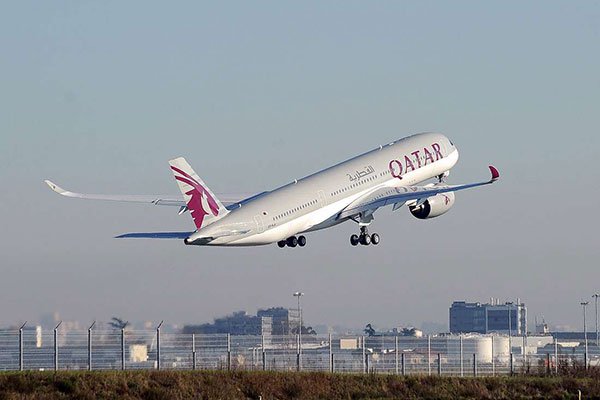 A Qatar Airways A350 plane. The families of more than 70 Kenyans stranded in Qatar due to lack of travel documents and air tickets to return home after falling out with their employers are now asking the government to facilitate their safe return. PHOTO | REMY GABALDA | AFP

The families of more than 70 Kenyans stranded in Qatar because of lack of travel documents and air tickets to return home after falling out with their employers are now asking the government to facilitate their safe return.

Mr Randani Mwachili is among those who paid Sh120,000 to different recruiting agencies in Kenya to secure a job as a cleaner in Qatar.

However, what he did not know was that the agencies were not recruiting firms but travelling companies ‘owned’ by Nigerians in Mombasa.

In April 2016, the youth travelled to Qatar to work as a cleaner at United Cleaning Management Company, but a year later trouble ensued.

“I was working as a house keeper, tea boy or swimming pool attendant. Payment of our salaries was our biggest issue. We were not being paid on time and, sometimes, we could work for four months without pay. So we decided to boycott duty in 2017,” Mr Mwachili said.

Mr Mwachili said the Kenyans later returned to work after their employer promised to address their grievances. He said they agreed and went back to work, but no payment was made.

“In March this year, we went on strike again. The company later terminated our contracts and evicted us from our houses. But when we went to court, the firm was ordered to allow us live in the houses until the case is heard and determined,” he said.

The matter is currently in court but the Kenyans said it is difficult to follow the court proceedings because everything is done in Arabic, which they do not understand.

They were also issued with letters as ‘protection’ from police whenever they are arrested.

“We are living on the streets depending on leftovers and food collected from garbage bins. But, luckily, this year Qatar Red Crescent heard our pleas and started providing us with free food. My salary was around Sh33,000. I want my over one-year salary arrears,” he added.

He said he will come back if the employer pays him his more than Sh300,000 arrears.

“How can I come back home empty-handed? We want our dues and air tickets. We can’t look for jobs elsewhere because we do not have Qatar work permits. We went to the embassy, but we have not found any help,” he said.

The company that recruited him was located in the upmarket Nyali suburb, but it was shut down more than two years ago and the Nigerian owners vanished into thin air.

Their Kenyan colleagues could also not be reached on phone.

On Thursday, the Council of Imams and Preachers of Kenya secretary general Sheikh Mohamed Khalifa, human rights groups and some families of the Kenyans stranded in Qatar appealed to Foreign Affairs Cabinet Secretary Monica Juma to rescue them.

“Our parliament should pass stringent laws to protect Kenyans working overseas. Employment agencies that are recruiting and duping Kenyans should also be shut down and the agents arrested,” Sheikh Khalifa said.

Ms Ruth Obimbo said her 34-year-old brother, Douglas Jack, left the country in 2013 and has been unable to return home due to lack of air fare.

“He left behind his wife and two children who are suffering. The company he worked for has abandoned him a year after his arrival, the recruiting agency which was based in Likoni was shut down. I paid Sh120,000 for him to secure a job in Qatar,” Ms Obimbo.

Another victim’s relative, Mr Basma Salmin told the Nation: “My brother Salim Salmin, who is 26-years-old, travelled in late 2015. We paid Sh90,000 to secure him a job in the Middle East but he is now stranded in Qatar and the agent is nowhere to be found. We urge the government to help them.”

A Qatar Airways A350 plane. The families of more than 70 Kenyans stranded in Qatar due to lack of travel documents and air tickets to return home after falling out with their employers are now asking the government to facilitate their safe return. PHOTO | REMY GABALDA | AFP  Kenyans stuck in Qatar now seek