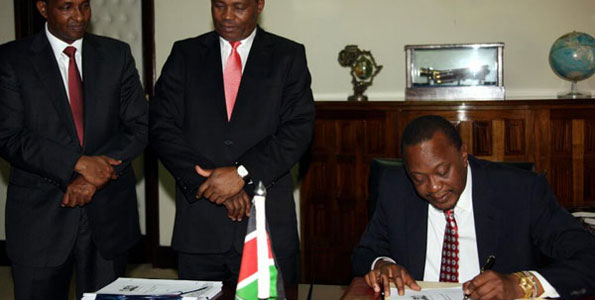 The Proceeds of Crime and Anti-Money Laundering (Amendment) Act, 2017, imposes stiff penalties on those found culpable in addition to identification, tracing, freezing, seizure and confiscation of the proceeds of crime.

The Act recommends that a person who fails to comply with the law be liable to a fine of not more than Ksh5 million ($50,000), while the penalty for an institution will not exceed Ksh25 million ($250,000).

“This is a major tool in our sustained efforts to fight corruption. It means that no proceeds of theft and corruption are beyond the reach of the State,” President Kenyatta said at the signing on Friday.

Money obtained from laundering has been allegedly used in East Africa to finance terrorism and drug trafficking.

The amended law adds that failure to comply with the law, an individual or institution will be liable to an additional penalty of Ksh10 million ($100,000) a day for a maximum of 180 days.

The new legislation also formalises the establishment of the Assets Recovery Agency, which will handle all cases of recovery of the proceeds of crime that come from money laundering.

President Kenyatta also signed into law the Supplementary Appropriation Bill, 2017 which authorises the release of Ksh46.2 billion ($462 million) from the Consolidated Fund for use by the government for the remaining part of the financial year which ends on June 30.