Kenya: Chiloba – Despite the Hurdles, We’re On Course for August 8 Elections 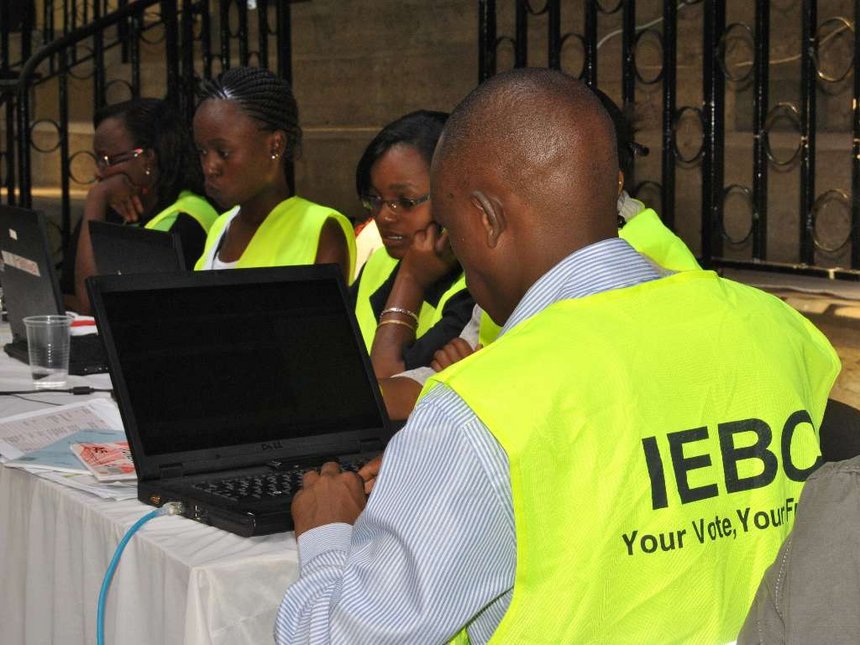 IEBC polling clerks key-in data to be fed into the election results transmission system during the 2013 general election. /FILE

Kenya: Chiloba – Despite the Hurdles, We’re On Course for August 8 Elections

The chief executive of Kenya’s Independent Electoral and Boundaries Commission Ezra Chiloba spoke to Fred Oluoch about the electoral body’s preparedness to hold free and fair elections. We are generally on course, since EOP was rolled out in January 2016, despite the various challenges that include transition of the Commission and the courts halting certain processes.

A significant number of our law reform proposals have been enacted; the procurement of electoral materials is on course, despite the court cancelling the ballot paper tender and the procurement of ICT infrastructure is at an advanced stage. We are now moving to the nomination process, where political parties will play a key role.

There have been concerns that IEBC has fallen behind its deadlines. In which areas is the Commission lagging behind and how are they likely to affect the quality of elections?

We have had to adjust some of the timelines in order to hasten the delivery of critical milestones as we get closer to the elections. The few challenges experienced are a result of litigation over our processes but we remain committed to delivering a free and fair election on August 8, this year.

How specifically is the ongoing court case filed by the Coalition for Reforms and Democracy regarding the auditing of the voter-register likely to affect your programme?

By law, the audit of the register of voters was scheduled for December 2016. We now wait on the court’s decision on how to continue with the matter. But because the problems with the register were largely known or anticipated, a lot has been done to remove the errors and increase its credibility. One thing you can be sure of is that we shall have a clean register that is accessible to all Kenyans at least 30 days before the general election.

The cleaning and auditing of the voter register is likely to be the next big political issue, given that there have been complaints of voters sharing ID numbers. What is IEBC doing about the issue?

We already informed the public of the 128,926 duplicate ID numbers in our BVR database, which could be attributed to: (a) data entry errors (b) attempts to register more than once or more than one individual sharing one ID card to register. The Commission has made the list of the duplicate IDs public and invited those affected to make corrections, including sending SMSs to them. Further, the Commission has started the configuration of the BVR system to ensure that, like fingerprints, the ID numbers form part of the unique identifiers of the voters.

If you own a home, you should read this. Thousands of homeowners did this yesterday, and banks are furious! Do this now before it’s…

Has IEBC investigated how the National Registration Bureau (NRB) allocated the same number to more than one person and all have been registered to vote?

After the Mass Voter Registration II and before the final certification of the register of voters, the Commission shall run the records of the register against the NRB database to confirm the authenticity and ownership of the ID numbers. In addition, the Commission, in collaboration with the Registrar of Births and Deaths, has made arrangements for the removal of dead voters on a continuous basis.

Is IEBC expected to carry out fresh procurement of devices, and which ones are needed, when?

In compliance with the requirements of the amended Elections Act, the Commission is procuring an Integrated Electoral Management System that we have christened KIEMS. This system will perform a wide range of electoral functions including voter registration, voter identification and results transmission.

What guarantee do we have that the BVRs given out to the Ministry of Devolution cannot be used to tamper with the IEBC voter register database?

The transfers were permanent and the kits were handed over without data or software to enable installation of a new operating system and software by the users.

Other uses of the biometric devices by the National Youth Service are not in any way connected to the Commission’s system or with the ongoing voter registration.

There is no correlation between the two systems and the software is not the same. The data collected is not the same. But also, we have asked the ministry to discontinue their registration until voter registration is complete. For the sake of transparency and accountability, the ministry is committed to share data that will be compared with our data so that all stakeholders are comfortable.

Is there a chance that the elections could be pushed back due to insurmountable challenges?

That is speculative. We are ready and preparing for the general election on Tuesday, August 8. However, we cannot achieve this alone. We must work together as a nation to realise the constitutional imperative of free and fair elections.

Kenya: Chiloba – Despite the Hurdles, We’re On Course for August 8 Elections Reviewed by samrack on March 3, 2017 .

Share thisFacebookTwitterPinterestEmailWhatsAppIEBC polling clerks key-in data to be fed into the election results transmission system during the 2013 general election. /FILE Kenya: Chiloba – Despite the Hurdles, We’re On Course for August 8 Elections By Fred Oluoch The chief executive of Kenya’s Independent Electoral and Boundaries Commission Ezra Chiloba spoke to Fred Oluoch about the electoral body’s preparedness