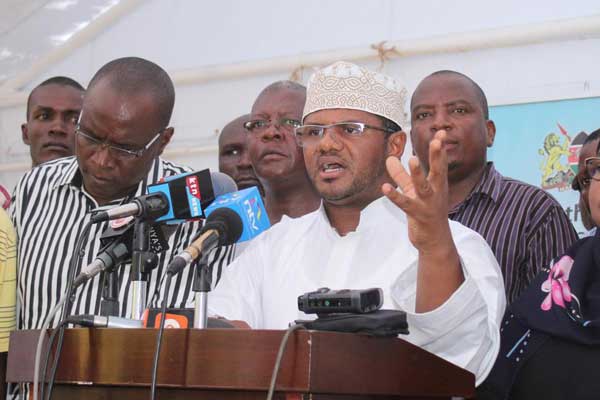 Wiper party Secretary-General Hassan Omar addresses journalists in Mombasa on March 3, 2017. He said the party will not agree to joint Nasa nominations in any part of the country. PHOTO | WACHIRA MWANGI | NATION MEDIA GROUP

Wiper party has ruled out joint nominations with parties in the Nasa coalition, insisting it will field candidates for all the seats across the country.

Secretary-General Hassan Omar Thursday said there is no agreement on joint nominations within the coalition, and that the party is busy recruiting aspirants countrywide for all the seats.

“There has been no consensus on joint nominations in any part of the country and Wiper will have aspirants in all positions,” the Mombasa Senator said.

His stand seemed to contradict the coalition’s assertion that Nasa would hold joint nominations, especially in its strongholds and in Mombasa and Nairobi.

It will be interesting to watch how the other coalition partners react to this stand, given that most of the people defecting to Wiper are from ODM.

According to the Mombasa senator who has declared he will battle to unseat Governor Hassan Joho, Wiper party has enshrined democracy and fairness, the reason why many people felt more comfortable dealing with Wiper than any other party in the coalition.

He denied claims that Wiper has raided ODM and other coalition parties’ backyards and is the sole beneficiary of the defections, saying people are joining the party because they are assured of fair play.

“Some people seem to be angry that we have aspirants all over the country and in all the seats from governor to senators and to MCA.

“If somebody feels that they are not being treated well in their party and come to us, we will not turn them [away] because this would be [an] impediment to free association,” he said.

At the same time, Mr Omar announced that the party has extended the registration of aspirants to March 11 due to what he referred to as a “high demand,” for the Wiper ticket.

However, this has been seen as extension of the “defection window”.

“There are still many aspirants who want to join us and we will continue recruiting (them).

“But we will not extend the deadline further and those interested should come forward before that date,” he said.

The senator also raised concerns over the way IEBC has handled their protest regarding the commission’s preparedness to hold the August general election.

“We raised the issues in a letter to IEBC and we want the commission to reply to us in the same way and not through the media,” he said.

We will field our own candidates, declares Wiper party Reviewed by samrack on March 3, 2017 .

Share thisFacebookTwitterPinterestEmailWhatsAppWiper party Secretary-General Hassan Omar addresses journalists in Mombasa on March 3, 2017. He said the party will not agree to joint Nasa nominations in any part of the country. PHOTO | WACHIRA MWANGI | NATION MEDIA GROUP We will field our own candidates, declares Wiper party Wiper party has ruled out joint nominations