Kenya Among Countries with largest number of African immigrants

Kenya Among Countries with largest number of African immigrants

According to a recent report from the United Nation’s trade and development arm, Unctad, Kenya is among the few African countries with largest number of immigrants from within the continent. The report, based on a study of the impact of migration within Africa, also lists Nairobi as one Africa’s top migration hubs.

Kenya remains the leading receiving country, with migrants originating mostly from outside Eastern Africa, yet it is also the main sending country to Eastern and Southern Africa. The absolute number of international migrant stocks in 2017 reveals that the main receiving countries were South Africa (4.0 million), Côte d’Ivoire (2.2 million) and Uganda, Nigeria, Ethiopia and Kenya (each exceeding 1.0 million).

The report adds that Somalia contributed to the highest number of immigrants to Kenya at 485,000 compared to Somalia–Ethiopia which stood at 467,000. Political instability and conflict in Somalia was the key driver of forced migration in the region. 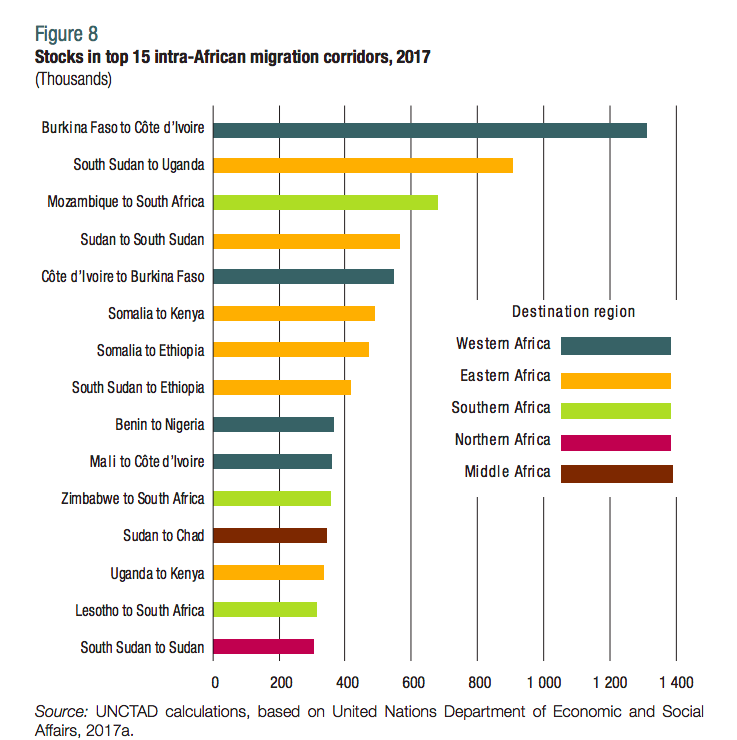 In addition the country has been able position herself as a key player across a sample of value chains attracting investment. The report argues that “migrants not only fill skills gaps in destination countries, but also contribute to development in their origin countries.”

According to Unctad, Kenya is one of the most diversified economies and attracts labor from other regions in the continent. Rwanda on the other hand is a major destination for migrants from Kenya and Uganda and has attracted highly skilled professionals.

This has been facilitated by Mutual recognition agreements between various professional bodies within EAC allow for cross-border practices among professionals and entitle professionals from partner. Such agreements, along with the abolition of work permits by some EAC partner States, have been vital in facilitating labor mobility among highly skilled professionals within the region.

“Similarly young professionals from Kenya in Rwanda, South Africa and the United Republic of Tanzania earn incomes that are relatively high by African standards” says the report.

“Eastern Africa is the most diversified region with regard to the origin of international migrants from Africa, as it receives significant shares of migrants from all other regions except Western Africa.” notes the report.