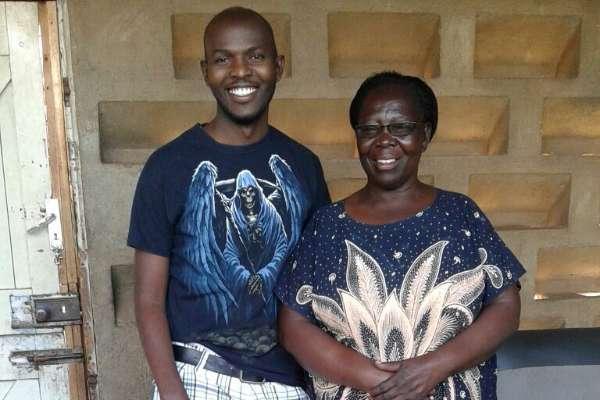 GRATEFUL FOR THE SUPPORT: Emmanuel Jadudi and his mother in Kisumu

Emmanuel Jadudi has received Sh6.1 million for a brain tumor surgery in India through a fundraiser that exceeded the Sh1 million target.

The third-year UoN sociology student had appealed for funds for a fourth procedure, scheduled for mid-August, to remove a recurring cancerous tumor.

He was diagnosed with Grade III Ependymoma in 2012. READ:That Thing In Jadudi’s Head.

Africa Cancer Foundation director Zawadi Nyong’o said the organisation, which was handling the fundraiser, had received Sh6,111,338 by 9am Thursday.

A fundraiser for University of Nairobi student Emmanuel Jadudi for a brain surgery has raised Sh6.1 million, far surpassing the Sh1 million targeted.

Jadudi, 24, had appealed for funds for the operation in India this month to remove a recurring cancerous brain tumour.

The third year political science and sociology student was diagnosed with Grade III Ependymoma in June 2012.

He has suffered impaired
speech following the diagnosis at the Kenyatta National Hospital.

His plight was first highlighted by lifestyle blogger Biko Zulu in a post titled That Thing In Jadudi’s Head.

A fundraiser was run through a social media campaign under the hash tag #1MilliForJadudi.

The Africa Cancer Foundation has opened an account through which
donations for Jadudi’s treatment can be made.

Jadudi has had three prior procedures to remove the cancerous tumor in his brain.

He has also undergone chemotherapy and physiotherapy, which forced him to relocate from Nairobi to Kisumu.

Biko said Jadudi reached out to him to assist with highlighting the condition through his blog, which has a large following.

The blogger detailed Jadudi’s struggle and his determination to exploit every option available in getting treatment.

“I asked him what scares him the most and there was a long pause, so long I checked my phone to see if the call had dropped,” Biko wrote in his blog.

“Just when I was thinking that maybe his silence was my answer, he said faintly, ‘I’m scared of dying’.”

Biko said Jadudi spoke in a near whisper, “like he didn’t want death to hear what he said”.

“Then he added, ‘I’m scared of dying not having met my dreams’,” Biko said.

Speaking to the Star on Tuesday, Jadudi called on the media to highlight brain tumours as a challenging condition to deal with.

“So many people suffering from the condition [cancerous brain tumors] cannot get the help and support I am getting because of the cost of treating it,” he said.

Jadudi acknowledged his family for the support given in the course of treatment.

“My family is still in shock, but has been supportive,” he said.

Jadudi said the high cost of therapy forced him to move to Kisumu to live under his family’s care.