[VIDEO] Burial permit is out but where is ‘god’ Jehova Wanyonyi ?

[VIDEO] Burial permit is out but where is ‘god’ Jehova Wanyonyi ?

You wouldn’t expect it from the compound of a missing deity but the homestead of Jehovah Wanyonyi, spiritual leader popularly referred to as a “living god” by hundreds of faithful in western Kenya, was deserted on Tuesday.

He has disappeared and his whereabouts remain a mystery.

A handful of women, including one of his wives, gathered in groups discussing in low tones what would befall his faithful, who have been left without a “shepherd”.

Several children could be seen outside the compound playing as the religion’s flag flew at full mast while the holy sword was lonely at the altar.

“We have nothing new to tell you at the moment. All we know is that Jehovah Wanyonyi, my husband and our ‘god’, is in hospital being treated after he developed back pains four years ago,” said Mrs Sylvia Nangila.

She said the “messiah” might have gone to visit one of his many wives before returning to his faithful.

The faithful of Wanyonyi’s Lost Israel sect have been camping at his Chemororoch Village home in Nangili, on the border of Uasin Gishu and Kakamega counties, for the past one month to establish his whereabouts.

But on Tuesday, Mobet Sub-Location Assistant Chief Paul Bett told Nation.co.ke that he had issued a burial permit to Wanyonyi’s family. 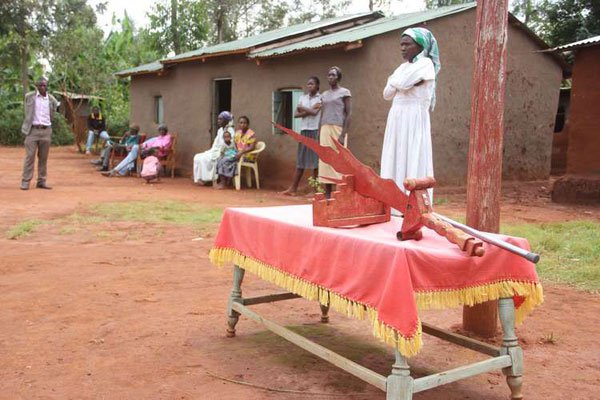 “On July 18, 2015, two sons of Michael Mwamboyi, alias Jehovah Wanyonyi, of Chemororoch Village came to my office and asked for a burial permit for their father after showing me the mortuary documents from Cherangany Nursing Home, where they said he had succumbed to illness,” said Mr Bett.

He identified the two sons as Michael Waswa and Nicholas Wanyonyi, saying they told him their father had died upon arriving at the hospital.

“I gave them the permit after they said that the hospital, located in Kitale Town, had demanded the permit before releasing the body,” he added.

Mr Bett said the body was not buried in his location after it was released from the mortuary.

“I visited the medical facility, where I was informed that the hospital had released the body to the family on July 19, 2015, but it was not buried in my area of jurisdiction. All I can say is that it is only the family of Jehovah Wanyonyi that knows where he was buried,” he said.

Kipsomba Location Chief Daniel Busienei said the assistant chief issued the burial permit to the family in accordance with the law.

“According to the law, we have natural and unnatural deaths. We are allowed to issue burial permits to anyone who dies at home and if the next of kin wishes to transfer the body to the mortuary for embalmment, we issue the document which they will use to remove the body from the mortuary before burial,” Mr Busienei said.

According to the administrator, for one to be issued with a burial permit, they must produce the national ID card of the deceased.

He said it was illegal for a burial permit to be leaked to the public.

“A burial permit should not be given to anyone apart from the next of kin. The permit is very private and confidential,” said Mr Bett.

The Cherangany Nursing Home management refused to comment on the issue, saying the Wanyonyis were well placed to do so.

“We cannot release any information to the public because it is confidential and only lies with the family of Jehovah Wanyonyi,” said a senior officer at the hospital who requested anonymity due to the sensitivity of the matter.

In July, a spokesman for the faithful, Mr Eliab Masinde, was quick to dispel rumours that their “god” was dead.

Mr Masinde said Mr Wanyonyi had been taken by his children to seek treatment at an undisclosed place after he suffered health complications.

“All that we know is that our god is alive and nobody should ever claim that he is in dead. He left his home on Friday accompanied by one of his sons and a church member to Kitale to seek treatment but was instead transferred by kinsmen to Nairobi for close supervision while undergoing treatment,” he said.

A wooden sword belonging to Jehova Wanyonyi is displayed at his home in Chemororoch Village, Uasin Gishu County, on . The self-proclaimed ‘god’ is missing

He said the spiritual leader has about 70 wives and countless children and they strongly believe that they are the true descendants of the children Israel in Kenya and in the diaspora. 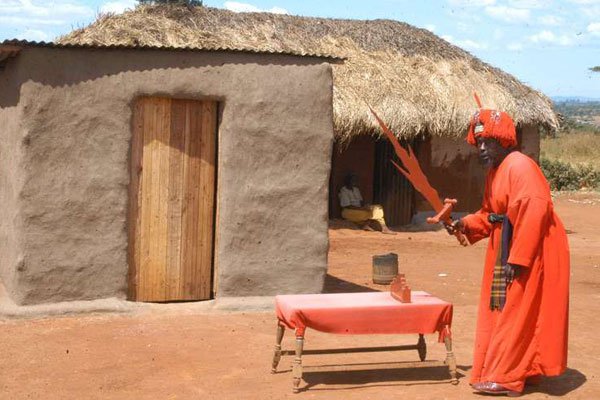 “We will tell you the day when our god will have his last breath but for now let us not keep on speculating,” said Mr Masinde, adding that he was praying for his quick recovery.

“All we know is that one day he will be back and tell the world what happened. He is our true god and nobody should peddle rumours about his whereabouts,” added Mr Masinde, surrounded by other faithful and family members.

The family members castigated the government for neglecting their “god”, noting that they have been subjected to humiliation whenever they sought assistance.

“None of our family members has received any assistance from the government leave alone stipend entitled to our father like any other elderly person,” said Ms Rebecca Nekesa, one of his daughters who arranged for the treatment.

The Lost Israel sect members claim they recognise the Bible and worship on Saturdays.