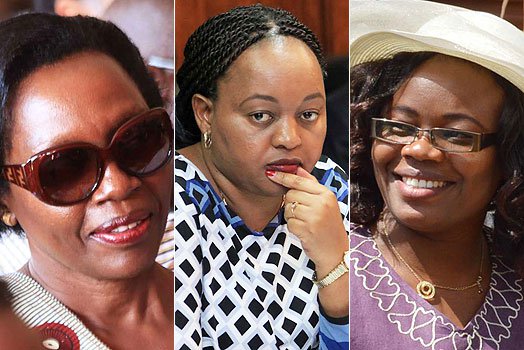 In some areas like Kiambu and Kirinyaga counties, the women candidates, seeking various elective positions in August 8 General Election, have successfully used the name to their advantage.

Former Devolution Cabinet Secretary Anne Waiguru, the Jubilee Party candidate for Kirinyaga gubernatorial contest is one of the candidates capitalising on the nickname to solicit for votes.

Ms Waiguru was given the nickname by her supporters, while on the campaign trail, soon after being declared the party’s nominee for the seat.

And she gladly accepted it and hopes it will work to her advantage.

If fact, in her campaigns, she has sometimes been walking around carrying minji — the Kikuyu word for fresh green peas — packed in polythene bags.

Peas are a delicacy in the country and especially in central Kenya where it is used to cook a variety of meals such as green mukimo, githeri and different stews. It’s also expensive.

And due to the catchy moniker, Ms Waiguru has become a real crowd puller wherever she goes.

“I’m the right youthful candidate you all talk about. I need your votes because I’m strong enough to serve you,” says Ms Waiguru.

When President Kenyatta visited Kirinyaga while on the re-election campaign trail last month, he referred to Ms Waiguru as ‘Minji Minji’ to the amusement of residents.

Ms Waiguru’s chief campaigner, Mr Mureithi Kang’ara, in an interview, says the former CS acquired the name because she is a “young and highly educated woman” pointing out that she was the electorates’ choice for the seat, especially the youth.

However, Ms Waiguru’s main opponents, who include Narc-Kenya leader Martha Karua and Governor Joseph Ndathi, disagree. Speaking separately, the two said the slogan will work against her.

“The voters are wise. They know that Ms Waiguru is not young. She is over 50 years. Residents will, therefore, not elect leaders who are using tricks during campaigns,” said Ms Karua.

And Mr Ndathi described Ms Waiguru as “stranger in the area and a newcomer in politics”.

He said residents required an experienced politician like him and that Ms Waiguru will be rejected during the polls.

“She will not be elected for calling herself Minji Minji. We know she is not young, but she just wants to mislead the residents without the slightest knowledge that they are wise enough,” said Mr Ndathi.

Ms wa Muchomba, too, has been using the name to excite the crowd, with whom it always resonates well.

“This time, you will elect Mr Waititu as the governor of Kiambu, Senator Kimani Wamatangi and, in the line-up, you will put in a stew of Minji Minji (Wa Muchomba),” she says, suggesting they should go with the ‘six-piece suit’ voting in favour of the Jubilee Party.

She initially used the ‘Wamother’ moniker, which stands for an aging woman. She dropped it when she realised it was depriving her image of the glamour she sought.

But what is the genesis of this ‘Minji Minji’ name? Who is the person behind it? What was the intention when it was created?

In 2010, shortly after the promulgation of the new Constitution, popular vernacular radio and TV host Kamau wa Kan’gethe, who at the time hosted Inooro FM’s breakfast show Hagaria, declared himself ‘Governor of the 48th County’ — that of his listeners. There are 47 counties in the country.

Mr Kamau, a former British Broadcasting Corporation (BBC) journalist, was aware that after the 2013 General Election, 47 governors would be elected, and he created “an extra county”.

After a few years of using the moniker, Mr Kamau who co-hosted the programme with Waithira Muitherani who is vying for the Murang’a woman rep seat, launched an entertainment programme dubbed Ngogoyo, which airs every Sunday from 12pm to 4pm.

Ngogoyo is a Kikuyu name for sugarcane juice. Usually, the name is used to refer to sweet things.

The programme proved popular as it played old Kikuyu music. His fans loved the oldies and started associating themselves with it. As a result, his fans, mostly in Kiambu and Murang’a counties started self-help groups which they christened Ngogoyo.

Today, the notable existing groups are Ngogoyo 237, based in Thika, Ngogoyo 100 in Kiambu and Ngogoyo Metumi in Murang’a, among others.

Initially, the radio programme appeared to only favour a male audience. But in a bid to make the ladies feel appreciated, Mr Kamau introduced a new segment that he named ‘Minji Minji.’

It was in this segment that he started playing songs targeting women. This, too, proved to be a major hit among his listeners.

“Female fans started forming the groups in their respective regions and named them Minji Minji na Kamaa. This spread like bushfire to other areas,” said Mr Kamau, who also used his programme to popularise the groups.

This has now changed as the August 8 elections approach, with female politicians using the nickname to woo voters.

“The name has become very popular in central Kenya. I cannot prevent the candidates using them because they are also my fans. However, I am happy that my creativity has been recognised,” Mr Kamau said.

His definition of Minji Minji, in this political context, is a woman who has a combination of beauty and brains. It is also used to make them feel loved and appreciated.

“I mean a beautiful lady who has brains and good manners. It’s a name to tease women to make them feel accommodated, appreciated and loved,” he said.

In almost every county in the former Central Province, an interesting trend has taken root — that of women politicians using the name ‘Minji Minji’ as their official campaign moniker.