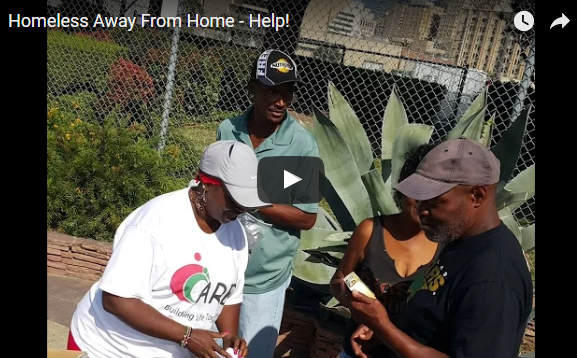 Homelessness is real. It hit home when Bongapoa came across a Kenyan and Nigerian living in Dallas’ streets during one of ICARE & HOPE IN LOVE MINISTRIES monthly operations.:Photo Courtesy

My attention has been drawn to the news of the death of a homeless Kenyan that was widely reported in the media both here and in Kenya in the month of March. Understandably, many questions were raised by a cross-section of people. But these were being directed to a people who were not in a position to answer. Following this incident we are likely to engage ourselves in the blame game and self-condemnation for perceived acts of omission and/or commission. We are also tempted to criticize the deceased albeit belatedly for what should never have happened in the first place. No wonder it begs for answers and leaves a lot to be desired in our foreign endeavors.

The incident has taken me back to my high school days. If my literature memory serves me right, I remember a character in Francis Imbuga’s play Betrayal in the City, which was one of the set books. The name of the character was Jere. Mosese his cellmate wakes up at night in a dream. Like a dignitary, he walks around the cell shaking hands with others present. As soon as he is done and goes back to bed, Jere remarks to himself; “When the madness of an entire nation disturbs a solitary mind, it is not enough to say the man is mad.” Like Jere, I am tempted to interpret that incident as nothing else but a societal abnormality. Judged from the Kenyan perspective (weather would never have been a major issue), the shed that the deceased is reported to have built for himself would never have needed heating. Again judged from the same perspective, the cost of shelter and other basic amenities here in Massachusetts is anything but normal. For a person brought up for a better part of one’s life in a highly communal environment, the highly individualized culture of this place denies one the much desired and now remotely available communal support. It is in this light that I remember the above words, which helps me to shift the blame from the individual to the society.

Moving to our scripture passage above, the debate between Abraham and God gives us an insight in to a unique kind of lifestyle within the context of a morally broken down environment. Abraham, definitely seeking a soft landing for his nephew Lot and family contends with God until he could go down no more. At the point that Abraham reached, it was clear that God was willing to spare Sodom and Gomorrah if only ten people were found to be righteous. It seems like Abraham did not want to zero in on his relatives only and so he did not push any further. In the final analysis, none was found to be anywhere close to righteousness safe for Lot, apparently the only person who showed some semblance of fear of God in the midst of a morally corrupt society. There are times in our lives and stay here when we feel like Abraham in the hands of God. We look for just a few people who can measure up to the standards of a community to no avail. Note that Abraham was seeking a way out for the salvation of the entire community of Sodom and Gomorrah, her moral ineptitude notwithstanding. We yearn for people like Abraham, who will go out of their ways in pursuit of the common good (read salvation) of the community even though they themselves may not be in precarious situations.

Please note that Lot resides near Sodom, not out of coercion but out of deliberate choice. When Abraham earlier asked him to choose where he would like to settle as a solution to the conflicts of their herdsmen (Gen. 13: 5-13), he chose “and pitched his tents near Sodom” (v. 12) because “the whole plain was well watered” (v.10). Does this situation sound familiar? We have chosen to be in this society (pitched tent) in pursuit of greener pastures (well watered), all the shortcomings of individualism notwithstanding. Hence we are here not by accident but by design and deliberate choice. How do we uphold the much desired and now remotely available communal values?

2 Peter 2: 7 & 8 tells us that despite all this, Lot was a righteous man. Despite the surroundings and the prevailing conditions, Lot managed to maintain and pursue that which he considered to be of treasured worth and value. For him, it was possible to be camped right in the heart of a morally wanting city and society and not be caught up in the web. It is possible for one to be caught up in an unexpected environment, one that the solitary mind can not change, and yet remain faithful to what is true, ideal, and valuable from one’s own perspective. If the things that we come across in this environment are strange, we do not have to engage in the same just because everybody is doing the same. One of most common adages is that “when you go to Rome, do as the Romans do.” I hate to buy that kind of a phrase. Surely, should one drink just because one finds themselves amongst drunkards? We should be informed by our Christian calling, sound upbringing and logical thinking. The Bible is quite clear that we should “not conform any longer to the pattern of this world” (Romans 12:2). Lot did not conform to the standards of Sodom and Gomorrah, but to the standards of righteousness.

Wapendwa it is possible for us to live and enhance our communal lifestyle far away from our familiar environment. We just have to learn that in the absence of one’s blood relatives, we can offer ourselves to be each other’s brother and sister. Please note that despite the conflict between Abraham and Lot there earlier, it is not enough for Abraham to let God punish Lot and his new-found neighbors. I insist that in spite of what others may have done or failed to do to and for us, it is possible to pursue their own salvation from the various predicaments of life here sometimes wrought, not of their own sins of omission and/or commission, but from what Jere refers to as ‘the madness of an entire nation.’

Abraham was conscious of one basic fact; that their heritage (and even blood relationship) surpassed the differences they could have with Lot. This basic truth enabled him to look at Lot in this moment of need, not as the man who conflicted or sinned against him, but as his beloved nephew. He shifted his focus from the negative issues of life and moved to what was positive. This quality enables one to ignore the worthless and pursue that which is beneficial and of greater good. I contend that despite everything, and I mean everything else that may arise amongst us here, our commonalities surpass our differences regardless. We all owe our heritage to our beloved Jamhuri and we have a moral obligation to uphold her integrity as her ambassadors in our own ways and right.

One of the costs that Abraham had to pay as a result of having accepted to be accompanied by Lot in his obedience to God’s command was to accept to carry his burdens. He never complained, neither did he refuse to carry Lot’s burdens. Having accepted God’s direction to this place (without God none of us would be here), we also have to acknowledge that we did not come here alone. We were accompanied by many “Lots.” And so we should never live, pretend, or behave as if we came alone. We have the burdens of the many “Lots” to carry. There is a cost to pay to maintain one another, including but not limited to pleading with God for the sake of our compatriots.

Blessings to you all,

Share thisFacebookTwitterPinterestEmailWhatsAppHomelessness is real. It hit home when Bongapoa came across a Kenyan and Nigerian living in Dallas’ streets during one of ICARE & HOPE IN LOVE MINISTRIES monthly operations.:Photo Courtesy IT IS POSSIBLE [GENESIS 18: 16-33] Reproduced from “Jamhuri” magazine in response to the death of a homeless Kenyan who died due to winter in