It is illegal for parties to tally results, even with IEBC nod 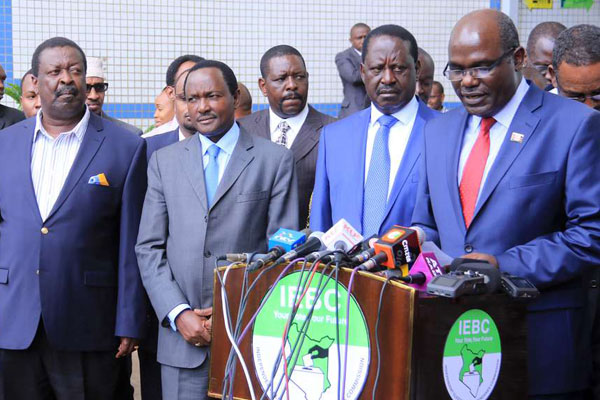 It is illegal for parties to tally results, even with IEBC nod

Since December 1992, when the first multiparty election was held following repeal of Section 2A of the old Constitution, losers in the presidential elections have always challenged the final vote count and tally.

In 2007, the dispute over tallying of results brought Kenya to the brink of civil war.

Thus the counting and tallying of presidential election votes is a high stakes matter.

No wonder Nasa principals have vowed that they will not accept tampered results during the August election.

As a measure against the rigging of the presidential election, Nasa intends to set up a parallel tallying centre and to declare results.

Without quoting specific legal provisions, IEBC had insisted that any parallel tallying system and declaration of results would be illegal.

However, about a week ago IEBC held a meeting with Nasa leaders during which an agreement was reached to the effect that political parties and media will be allowed to operate a parallel tallying system for their own internal use but that it is the mandate of the IEBC to announce and declare the results of an election.

Consequently, Nasa is now at liberty to implement its plan to deploy about 45,000 polling agents countrywide to guard against “stealing” of presidential votes.

On reflection, the unwritten agreement between Nasa and IEBC begs the question: who is fooling who here?

The issues of mischief and motive are critical in order to answer this question.

For starters, a parallel tallying system will not be regulated by any objective criteria and so we must be concerned what will happen whenever the figures of Nasa do not agree with those of IEBC.

Secondly, reasonable people must wonder about the likelihood of a political party to be so well-motivated as to invest considerable resources to confirm that it has won or lost an election.

Thirdly, is there any guarantee that the results of the parallel tallying will remain ‘only for internal use’ if and when a dispute with IEBC results emerge?

The way I see it is that parallel tallying of presidential results by a political party will set the stage for announcement of parallel results to contradict – in the charged court of political opinion – the results announced by IEBC.

Politically, therefore, the unwritten MoU between Nasa and IEBC betrays incredible naiveté on the part of the commission but my main beef with it is that parallel tallying by a political party is illegal whether or not IEBC is okay with it.

In my view there are five reasons why the law does not allow any person or party to engage in parallel tallying and announcement of electoral results.

RULE OF LAW
First, tallying votes and releasing results fall under the exclusive responsibility of IEBC under Article 88(4) of the Constitution, which mandates it to conduct or supervise referenda and elections.

This exclusive mandate cannot be shared or jointly discharged with any other body, particularly contestants in an election.

Secondly, parties are established as body corporates and their powers, functions and privileges are set out in Article 91 of the Constitution, the Political Parties Act and in the Elections Act.

As with any other body corporate, a party can only do what the law expressly permits it and no more.

Since there is no law that empowers parties to tally votes and announce results, it is absurd for any lawyer to justify Nasa’s intentions by stating that the Constitution does not prohibit it from doing so.

Thirdly, by virtue of Section 3(1) of the Political Parties Act, 2011, a political party formed in Kenya must comply with the law and cannot further purposes that are contrary to the Constitution or any written law.

In my view, parallel tallying of votes and announcement of results is contrary to the Constitution, the Elections Act and regulations.

It bears emphasis that compliance with the law is the mandatory obligation of every person and body in Kenya.

Time has come for leaders of the big parties to realise that they are not immune to legal sanctions for unlawful actions and conduct.

Fourthly, Article 91 of the Constitution requires every political party to observe the code of conduct for parties.

This code of conduct is set out in the First Schedule of the Political Parties Act.

Under Clause 6 of this Code every political party shall, inter-alia, respect, uphold and defend the Constitution and any other written law relating to elections and political parties.

Equally notable the Electoral Code of Conduct set out in the second schedule of the Elections Act applies to all political parties and candidates.

Under Clause 6(k) of this code all those bound by it are required to acknowledge the authority of the commission in the conduct of the election or referendum and to implement the orders and directions of the commission.

NATURAL JUSTICE
Fifthly, Clause 6(o) of the Electoral Code of Conduct provides that without prejudice to the right to present a petition to an election court all candidates and parties shall “accept the final outcome of the election and the Commission’s declaration and certificate of the results thereof”.

Applied in our context, what this means is that the only recourse for any candidate or political party is to challenge the results announced by the commission before an election court as opposed to engaging in parallel tallying and unilateral declaration of the election.

Finally, the political perils of announcing electoral results by any of the election contestants is obvious.

The basic principle of natural justice holds that no one can be a judge in his or her own cause.

If Nasa is allowed to go ahead with its plan for parallel tallying then all other contestants could as well do the same and in the end every major contestant will claim victory by August 9.

If that happens the political meltdown of 2007-2008 will seem like a picnic.

It is illegal for parties to tally results, even with IEBC nod Reviewed by samrack on April 14, 2017 .

Share thisFacebookTwitterPinterestEmailWhatsAppIEBC Chairman Wafula Chebukati, flanked by Nasa leaders, addresses the media at the IEBC offices in Nairobi on April 6, 2017. Tallying votes and releasing results fall under the exclusive responsibility of IEBC. PHOTO | JEFF ANGOTE | NATION MEDIA GROUP  It is illegal for parties to tally results, even with IEBC nod Since