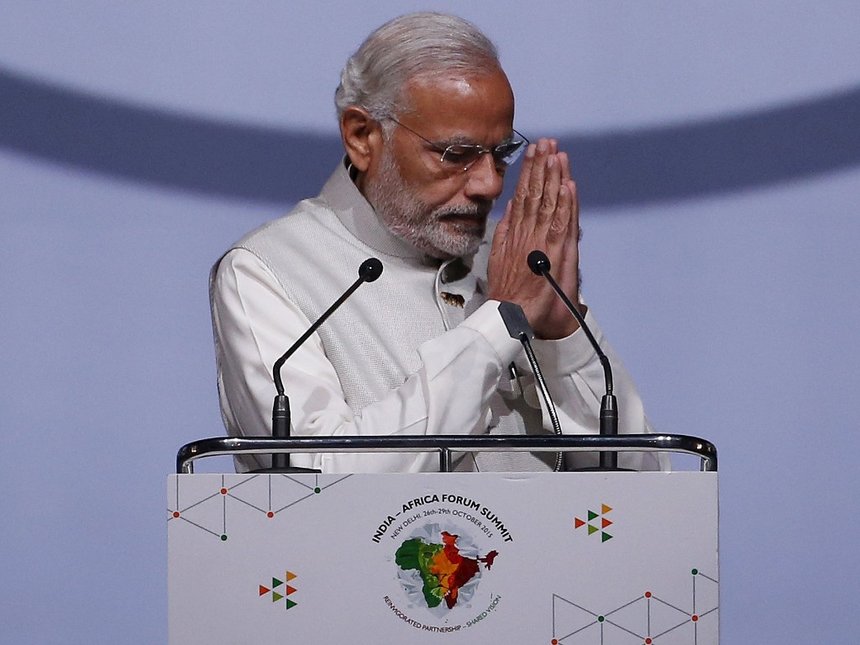 India’s Prime Minister Narendra Modi folds his hands in a traditional Indian greeting before addressing at the Inaugural Session of the India-Africa Forum Summit in New Delhi, India, October 29, 2015. Photo/REUTERS

Modi is expected to address a open public forum at the Kasarani Stadium before holding talks with Uhuru at State House.

Uhuru has been keen to have Indians invest in Kenya, especially in healthcare, given that Kenyans spend billions of shillings on treatment in India.

Many Kenyans go to India for cancer treatment and the President has previously urged Indian hospitals to set up branches in Kenya.

Modi’s visit is also expected to enhance and deepen trade between the two countries and help reduce the huge trade imbalance.

While on the visit to India, Uhuru called for a shift in the India-Africa trade toallow African countries earn more from value-addition, instead of export of raw material.

Modi started his African visit in Mozambique then went to South Africa and Tanzania.

He joins the long list of high-profile foreign dignitaries who have visited the country recently.

Last week, President Kenyatta hosted Israeli Prime Minister Benjamin Netanyahu . He was in the country on a three–day visit. Netanyahu was reciprocating Uhuru’s visit to Israel earlier this year.

Kenya and Israel signed several agreements, which covers health and immigration. The agreements will allow for the abolition of certain categories of visas.

The Israeli PM also pushed for Kenya to support Israel’s bid to be given an observer status at the African Union.

President Kenyatta and PM Netanyahu also flagged off a new group of students, who are headed to Israel to learn irrigation and automated agriculture technologies.

At the bilateral level, Uhuru and Desalegn welcomed the decision to elevate the economic relations between the two nations through signing the Historic Special Status Agreement.

The two leaders also committed to redouble their efforts and undertook to provide their support for the creation of a conducive environment for trade and investment between the two countries.