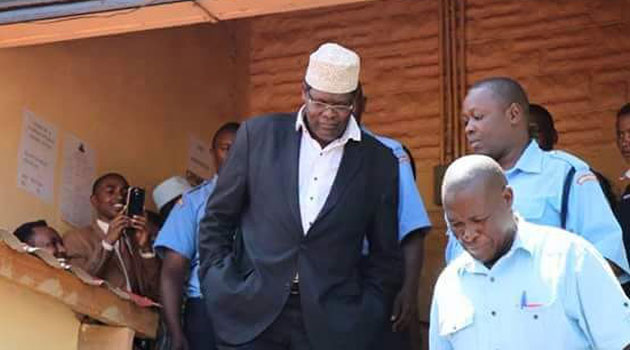 In affidavits filed on Friday, the two said Miguna was set free on Tuesday at the Inland Container Depot Police Station pursuant to an order issued by Justice Luka Kimaru that day.

The outspoken lawyer had earlier in the day declined to take a plea at a Magistrate’s Court in Kajiado where the police had arraigned him to answer to charges of consenting to the administration of a treasonous oath on National Super Alliance leader Raila Odinga on January 30.

Miguna commissioned and witnessed the oath through his law firm.

“I was informed by my officers that the applicant (Miguna) was released vide OB/6/2/18,” Kinoti stated in his affidavit.

In a separate affidavit, however, Department of Immigration Director, Gordon Kihalangwa, said he instructed his officers to arrest Miguna following a deportation order issued by Interior Cabinet Secretary Fred Matiangi on Tuesday.

Kihalangwa equally denied being in contempt of court saying he was not aware of an order issued by Justice Kimaru since the Department of Immigration was not a party to court proceedings which resulted in the issuance of the order.

In a detailed account, Kihalangwa explained that he had, upon perusing an immigration file related to Miguna, come to the realization that the Kenyan passport held by the self-proclaimed general of the Opposition civil disobedience movement – National Resistance Movement – was illegally issued.

It is based on the findings that Kihalangwa made that CS Matiangi issued Miguna’s deportation order, the affidavit by the immigration chief disclosed.

“The applicant (Miguna) was arrested within the precincts of Inland Container Depot, in Embakasi, and taken to the Jomo Kenyatta International Airport for purposes of deportation and did board KLM Airline Flight Number KL0566 to Toronto Canada via Amsterdam,” Kihalangwa stated.

Justice Kimaru had suspended all criminal proceedings against Miguna until he was produced in court on Wednesday. This was after police failed to produce him the previous day so that he could be released in accordance with a Sh50,000 successful bail application.

“For the court to make an appropriate determination on what action to take, Boinnet and Kinoti are directed to swear affidavits in person in regard to the circumstances under which the applicant was released to immigration officials during the subsistence of a valid court order requiring them to produce him in this court so that he can be dealt with in accordance with the law,” Justice Kimaru ordered.

Boinnet and Kinoti were further ordered to appear before Justice Kimaru next week Friday – February 14 – to explain why they should not be punished for contempt.

The two have explained their absence in court on Tuesday last week to have been occasioned by mandatory duties which they had to attend to.

“I did not disobey the Order of this Honourable Court, since at the time the information that I and DCI were required to be present before this Honourable Court on February 6, I was already scheduled to attend a National Security Council meeting,” Boinnet’s affidavit read in part.

“Due to the nature of my duties as the IG, it is mandatory that I attend all National Security Council meetings for the sole purpose of ensuring our country’s safety and security,” the police chief explained.

Boinnet told the court that the police service had appointed two officials to hold brief for himself and Kinoti who according to the affidavit was at the time on a special assignment at the Boni forest enclave in Lamu.