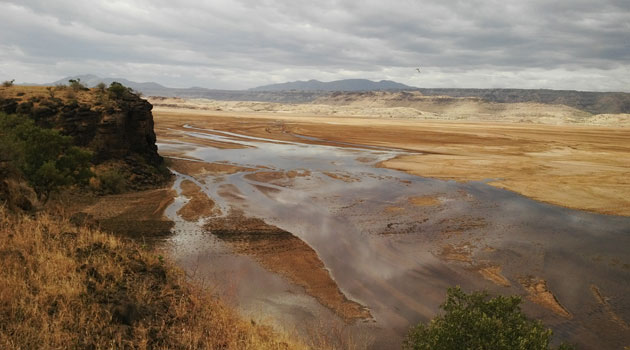 The late Nobel Laureate Wangari Maathai once said: “We owe it to ourselves and to the next generation to conserve the environment so that we can bequeath our children a sustainable world that benefits all.”

Four years later since her death, Kenya is yet to win its war on conserving its environment with new problems piling on its plate such as the ongoing siltation in Lake Magadi.

The lake is to many people a source of income with dozens of entrepreneurs starting soda ash related businesses. To others, Lake Magadi is a tourist attraction mainly because of its great location, its salty nature and the flamingos that nest there.

“Lake Magadi is also a source of livelihood to communities in Kajiado County. Life begins and ends for them at this lake,” says Joshua Marabui, a resident of Magadi and an engineer at Tata Chemicals Magadi Limited.

To illustrate this, Tata Chemicals Magadi Limited, the sole miner of Soda Ash at the lake, in turn provides social amenities to the community. For instance, the company provides water, a hospital and a school among other things.

But this livelihood is under threat.

Soil erosion taking place upstream in Narok is ending up at the lake, hence destroying the purity of the naturally regenerated trona that is processed to make soda ash, a process called siltation.

According to Tata Chemicals Magadi Limited Managing Director Engineer Jack Mbui, siltation is the pollution of a water body by fine particle material which could be silt or clay.

The process has been 10 years in the making.

“The first deposition of silt came back in 2005 when the Narok-Mai Mahiu road was being made. The soil that was dug during the construction of the road and made its way into the lake after a series of heavy rains,” Mbui stated.

Other factors have also come into play as far as accumulation of silt on the lake is concerned.

According to Mbui, increase in population in Narok has pushed residents into cutting down trees to increase habitation areas. The residents have also adapted poor agricultural practices that have further fuelled soil erosion.

“People no longer construct terraces on their farms. Indigenous trees are also not planted. All these have made siltation much easier as the soil is now much more lose making erosion much easier,” Mbui indicated.

The tipping point however came in April this year when flash floods hit Narok rooting away businesses, homesteads and destroying major parts of the town.

According to Tata Chemicals, the flash floods deposited as much as 8,000 tonnes of silt per hour into Lake Magadi. The accumulated silt is therefore four feet deep laying on the surface of the trona.

This is grave danger to the lake.

“Trona takes as much as 15 to 20 years to regenerate. But with silt, it takes much longer while also reducing its purity. If this trend continues, our future generations will not have anything to mine,” he explains.

Magadi’s trona is purified into soda ash which, among other things, is used to make glass and animals salt among other things. The country’s biggest market for its soda ash at the moment has been Middle East. But according to Mbui, giant economies such as China and US are already manufacturing their own soda ash artificially for their glass markets.

The locals who have farms in areas surrounding Lake Magadi have also been affected with some stating that they cannot grow products on their farms anymore due to the amount of water from upstream which goes into the farms.

“We therefore need to stop this siltation if we have any chance of competing favourably with these countries,” he states.

To stop siltation and save Lake Magadi, Tata chemicals has outlined what can be done.

For starters, river Kisamis, which is upstream, could be diverted into Oldorko, to stop the river from spilling into the lake. River Olonchakunai in Mosiro Ward could also be diverted so as to moderate the volume of water going into Lake Magadi.

Alternatively, check dams could be built in order to ease velocity of water. Water catchment areas could also be constructed upstream to regulate the amount of water going into Lake Magadi.

“The farmers in Narok areas such as Suswa, Nairagie and Ntulele could also contribute to ending the siltation menace by practicing safe farming by constructing terraces that could assist in stopping siltation,” Mbui explained.

How Siltation Is Gradually Choking Lake Magadi Reviewed by samrack on July 8, 2015 .

Share thisFacebookTwitterPinterestEmailWhatsAppThe late Nobel Laureate Wangari Maathai once said: “We owe it to ourselves and to the next generation to conserve the environment so that we can bequeath our children a sustainable world that benefits all.” Four years later since her death, Kenya is yet to win its war on conserving its environment with new