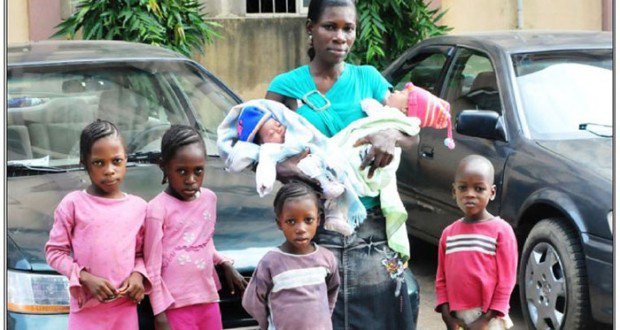 That is the big question as his wife, Ruth, 34, (pictured above with children) from Abia State broke the news of his disappearance since February.

Uche, 39, fled home when he learnt that his expectant wife was carrying a set of twins – the family’s third.

Nigeria’s Nation Online reported that Mrs Uche was at the Lagos State Secretariat, Alausa on Monday with her six children, pleading for help.

Not many knew what she wanted as she stood under a tree, close to the Press Centre, carrying the babies. Her first two sets of twins, much older, stood close to their mother, and did not in any way seem intimidated by the sea of cameras and faces focusing on them.

Mrs. Uche was receptive when  our reporter approached her to narrate her ordeal.

In 2009 when she first conceived, she was delivered of two girls – Goodness and Godnews. The second conception, two years later, produced another two – a boy and a girl, named John and Joyce.

But when her husband, Emeka, learnt that the third pregnancy was another set of two he fled their number 32, Awori Street, Agege home on the outskirt of Lagos to an undisclosed location in Ikorodu, Lagos.

The third set of twins arrived last month. They were named Daniel and Daniella.

Mrs. Uche said she could no longer cope with widening needs for food, clothes, drugs and school fees.

Her meagre earnings as a teacher in a private school in Lagos can no longer meet their needs.

Her story: “I met my husband in 2002 but we got married in 2008. We met in the village at Umuahia. I don’t want to leave the children and run away. This is why I want government to help us,” she said.

She recalled that she never wanted the third pregnancy, but her use of traditional means of family planning (counting fertile and infertile days) failed her.

“I was using traditional way of family planning where I calculate some days before having intercourse. It was working for me. You can see my first set of twins is four years old.

“You know as women, we cannot deny our husband that thing whenever they request for it. Whenever I mistakenly take in, he would say that I was pretending. Sometimes, I would go through long process to abort the pregnancy. After that, another one would happen. I would still have to go through the process again to abort it. When this one happened he still insisted that I was pretending until the pregnancy became obvious.”

“My Church was responsible for the payment of the first delivery. The church paid N120, 000 for the delivery of the first set of twins. The two deliveries of the twins have been through Caesarean Section for which we paid N120, 000 each. The last twins are through normal delivery”.

Mrs. Uche explained that her husband, a factory worker in Iju Road, Agege, has since refused to pick her calls. She learnt that he stays in Ikorodu.

“Since I gave birth to the children, I have tried calling my husband but he would not pick once he knows that it is me. I contacted his mother and other relatives to tell them that he has run away. They promised that they will call back. Since then, none of them has called me. It is not easy for me at all.

“I know only two of his relations. One of them lives in Ikorodu; the other one lives at Ajegunle. My elder brother, who could have also helped, is very angry with me for giving birth to another set of twins. He warned me before not to have any other child after the two sets of twins, especially with the kind of husband I have.

“I cannot put my hands in blood shedding by committing abortion. I want Nigerians to help me because there is nobody to pay their school fees.

“I went for immunisation some days ago and I told them my condition and why they have not been seeing me. It was there that they advised that I should come to government. Government should please help my children; no one to help me with house rent, electricity bill, school fees, food and so on,” Mrs. Uche said.

Source: The Nation of Nigeria

Man Disappears Over Wife’s Third Set of Twins Reviewed by samrack on July 8, 2015 .

Where  is Nigerian Citizen Emeka Benjamin Uche, a Lagos factory worker? That is the big question as his wife, Ruth, 34, (pictured above with children) from Abia State broke the news of his disappearance since February. Uche, 39, fled home when he learnt that his expectant wife was carrying a set of twins – the