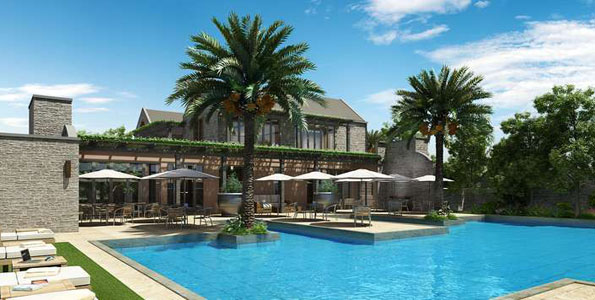 BACK VIEW OF A VILLA AT PALM VALLEY. IT IS A COLLECTION OF 88 LUXURY MIXED-UNIT RESIDENCES IN A GATED COMMUNITY SET ON TWENTY ACRES IN THE HEART OF NAIROBI’S MOST DESIRABLE RESIDENTIAL ESTATES, BORDERING RUNDA IN THE RAPIDLY DEVELOPING KIAMBU COUNTY. PHOTO | COURTESY

There are currently 8,500 high net worth individuals in Kenya, according to the New World Wealth report. This is a South Africa-based research firm, which compiled the report from 2008 to 2015.

This group of wealthy Kenyans – comprising people with at least $1 million (Sh100 million) in net assets and stretching all the way to dollar billionaires – only go for the best that money can buy.

“Collectables are a growing segment in Kenya,” notes the report.

The super rich mostly walk around with liquid cash, both in local and foreign currencies. Their homes sit on prime real estate, leafy suburbs and beach front properties, says the report.

For their banking and investment, they prefer private banking suites and have retained the services of top-notch stockbrokers and savvy private wealth advisors to manage their wealth portfolios.

High-end art is one of the growing favourite buys for the rich. Nairobi-based Circle Art Agency, for example, sold one artwork for as much as $30,000 (Sh3 million) at an auction last year.

At another art auction in November 2015 at the Villa Rosa Kempinski Hotel in Nairobi, rich Kenyans snapped up artworks worth $187,000 (Sh18.7 million) from Circle Art Agency in an evening.

As for real estate, individuals from this group do not simply have one home where they live in the city or big towns. They want to have weekend homes in another city, another home in the countryside and a home abroad where they go for their vacations and where their children live as they go to school in those foreign capitals.

Half of Kenya’s super rich own second homes abroad, says the report, with London being the most favoured. Apart from the UK, other favourite hotspots where these wealthy Kenyans own luxury apartments and penthouses for second homes include New York, Geneva, Paris, Cape Town and Johannesburg.

Furthermore, 62 per cent of the filthy rich Kenyans own domestic second homes, with Mombasa’s Nyali, Bamburi and Shanzu being the most popular playgrounds for the opulent, says the report.

When the rich are done with work, they indulge in luxury travel and fine dining. The report says the preferred holiday destination for Kenyan-based dollar millionaires is London.

Other overseas holiday hotspots for these Kenyans are: New York, Cape Town, Zanzibar, and Seychelles.

When travelling locally, their most preferred hotels include Hemingways in Nairobi, Villa Rosa Kempinski and Cottar’s Safari Camp at the world famous Masai Mara Game Reserve.

While on holiday, travel or work, this class loves shopping for luxury goods. They spoil themselves and each other with expensive items such as watches, clothes, accessories and jewellery.

If travelling – whether on business or holiday – they only book into luxury five-star hotels and lodges.

Today, Kenya is the third largest luxury market in Africa among seven countries with revenue of $0.4 billion (Sh40 billion) in 2015, says the report. It adds: “Kenya was the only major African market to experience a percentage rise in luxury revenue in 2015.”

On this list, Kenya comes behind South Africa and populous Nigeria respectively. Behind Kenya are Angola, Egypt, Morocco, Ghana and Algeria.

For luxury clothing and accessories, the Kenyan super rich go for well-known global brands. This class will fly to South Africa or the UK for their shopping.

Clothing, shoes and handbag brands such as Lacoste, Louis Vuitton, Burberry, Gucci, Prada, Salvatore Ferragamo, Bally, Dolce & Gabbana, and Thomas Pink are popular with the Kenyan rich when looking for apparel and accessories and are the labels you are most likely to find in their wardrobes.

Women with deep pockets will go for high fashion house Christian Louboutin or Jimmy Choo for their shoes, handbags, accessories and fragrances.

For vehicles, top of the range fuel guzzlers which offer a mix of opulence and horse power are what they will splurge on. According to the report, Porsche and Range Rover currently remain the two favourite brands for those with money and who want to stand out.

Last year alone, Porsche booked over 400 units after only being in the country for about a year. This top selling luxury car has relegated Mercedes Benz to second place.

It’s just a matter of time before other luxury car models set up base in the country going by the hunger that exists among the moneyed for these social markers that set them apart from ordinary mortals.

If you watch the roads keenly, you will catch a glimpse of some moneyed Kenyans behind the wheels of a Maserati, Ferrari, Bentley, Aston Martin, Rolls Royce, Lamborghini and McLaren.

The 2016 Bentley Bentayga (which is yet to arrive in Kenya but has already been ordered) will set you back about $300,000 (Sh30 million), but this is well within the reach of Kenya’s rich class.

Kenyan high-net worth also have a penchant for luxury liquor products such as cognac and single malt whisky.

You will most likely find wealthy Kenyans sipping the likes of Johnnie Walker (blue label) whisky, which costs about $180 (Sh18,000) per bottle.

For champagne, nothing less than the vintage Dom Perignon, which goes for about $125 (Sh12,500) will do for toasting special occasions or just an evening drink with friends.

The New World Wealth report says there are 30 Kenyans who own private planes. This ranks Kenyans fourth behind South Africa where 170 multimillionaires own private jets, Nigeria (90) and Egypt’s 50.

Unlike the other countries where the rich own private jets, rich Kenyans are most likely to own private helicopters, that they use to traverse the country as they go from one home to the other.

Other popular luxuries include filling their wardrobes with items such as expensive watches, handbags, shoes, fragrances, and designer suits, especially for men.

Rich men will not bat an eyelid when they spend $25,000 (Sh2.5 million) on a high-end Patek Philippe watch, considered a classic timepiece or splurge $20,000 (Sh2 million) on a Breguet watch, both Swiss made luxury watches.

Rich Kenyan men also like to associate with tennis star Roger Federer – the face behind Rolex watches, which go for about $10,000 (Sh1 million)

Women, on the other hand, spend mind boggling amounts buying handbags – going for those that exhibit style, design, and are made of leather.

The Burberry range of women’s bags, ranging from totes and bowling bags to clutches and crossbodies, cost from $1,000 (Sh100,000) a piece.

Because they don’t just buy a pair – they have to get matching shoes for every dress and handbag – other shoe options for sassy rich women include Prada as well as a collection of Gucci shoes that cost an average of $500 (Sh50,000) per pair.

Most rich men will go for handmade, tailored fitting suits, to ensure their looks command respect. Italian luxury firm Brioni stands out as one of the finest tailors, with custom made suits going for as much as $43,000 (Sh4.3 million).

Brioni is among the high-end designer fashion houses that have realised that Kenya is rapidly coming up as a luxury fashion stop and for the past few years, has been sending one of their best designers and tailors to come to Kenya to do fittings for their customers.

How about sunglasses? The rich women will go for designer shades and lenses, such as Prada sunglasses which go for about $300 (Sh30,000) while the men will make do with the $200 (Sh20,000) Ray-Ban sunglasses that come in different frames and lens colours.

The rich love to have their money work for them. Therefore, they turn to experienced professionals for advice on where to put their money to get the best returns.

For this, they will go to players such as Barclays, Standard Chartered, Credit Suisse, FNB, and Pictet both locally and abroad for wealth advisory services.

Here, they are guaranteed personalised service, confidentiality, and enjoy extended banking hours during weekdays as well as weekends.

From this report, we can see that Kenyans are rapidly climbing the ladder of High Net worth Individuals in Africa with the number of those in this bracket, as at last year, standing at 8,500.

The middle class, which has been growing steadily in the past few years, continues to attract multinationals that deal in luxury products to set up base in Nairobi. The upcoming Two Rivers Mall is expected to host several luxury brand names which have yet to be seen in Kenya.

How Kenya’s super rich spend their cash Reviewed by samrack on March 1, 2017 .

Share thisFacebookTwitterPinterestEmailWhatsAppBACK VIEW OF A VILLA AT PALM VALLEY. IT IS A COLLECTION OF 88 LUXURY MIXED-UNIT RESIDENCES IN A GATED COMMUNITY SET ON TWENTY ACRES IN THE HEART OF NAIROBI’S MOST DESIRABLE RESIDENTIAL ESTATES, BORDERING RUNDA IN THE RAPIDLY DEVELOPING KIAMBU COUNTY. PHOTO | COURTESY How Kenya’s super rich spend their cash Kenya’s super