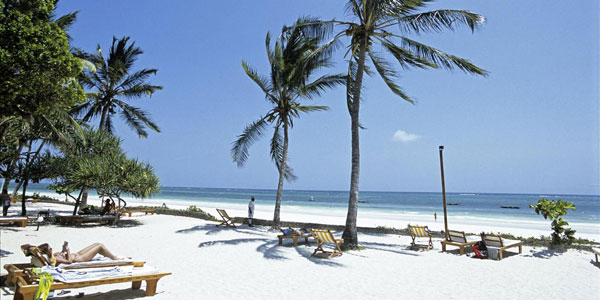 DIANI BEACH IN KWALE COUNTY, JUST 30 KILOMETRES FROM MOMBASA. IT HAS BEEN VOTED SEVENTH BEST BEACH IN AFRICA IN 2017 BY AN AMERICAN TRAVEL WEBSITE, TRIPADVISOR. PHOTO | FILE | NATION MEDIA GROUP

The popular white sand beach in the South Coast was ranked seventh overall in the list of top 25 best beaches in Africa.

Seychelles had six beaches rated among the top 25 in Africa while South Africa and Mauritius had five beaches each in the list.

Globally, Baia do Sancho Beach from Brazil was voted the best beach in the world, Grace Bay Beach from Turks and Caicos took second position, Eagle Beach from Aruba was third, Playa Paraiso from Cuba was fourth while Siesta Beach in Florida was fifth overall.

On the TripAdvisor website, one of the travellers had this to say about Diani beach:

“Even if you never get to go, this is one for the mental image bank at least – use it when dreaming.”

On Tuesday, Kwale Governor Salim Mvurya was delighted that Diani Beach had been voted seventh best beach in Africa this year by TripAdvisor.

The governor thanked travellers from across the world who voted for the popular beach in the country.

He commended tourism stakeholders and residents for taking care of the beach by preventing it from sea pollution.

Mr Mvurya said the county would combine efforts with hotels and residents to maintain the pristine nature of the beach for it to be rated top in forthcoming rankings.

Kenya Association of Hotelkeepers and Caterers Coast executive officer Sam Ikwaye said the ranking of the beach would boost tourism in the South Coast.

The KAHC official added that the ratings by TripAdvisor was a demonstration that travellers had confidence in Kenyan tourism products.

“There is need for aggressive marketing for both local and international tourists to come in droves to enjoy our alluring beaches at the Coast,” he said.

The Kato official added that Diani could be busy throughout the year if the beach is aggressively marketed in international markets.

The Travellers’ Choice award winning beaches 2017 were voted based on millions of reviews from travellers across the world.

The American travel website has more than 60 million members and over 170 million reviews and opinions on attractions, hotels, restaurants and other related travel-related businesses.