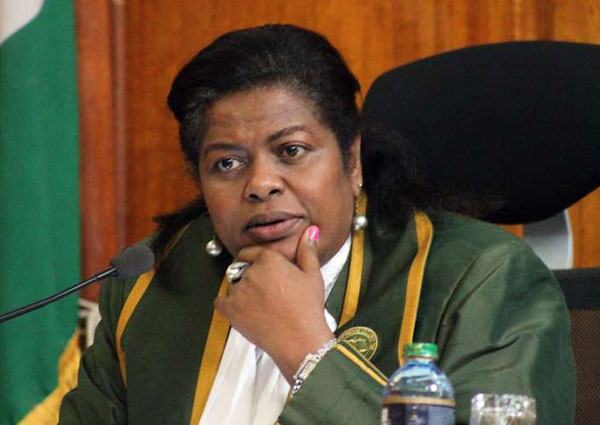 It is the duty of every judge to make decisions and legal interpretations and so Justice Njoki Ndung’u of the Supreme Court made hers.

Her decision to allow Deputy Chief Justice Kalpana Rawal and fellow Supreme Court Judge Philip Tunoi to remain in office until suits they filed against their retirement age are determined has however left her watching the Judicial Service Commission (JSC) – her employer- to make theirs on whether to suspend her as they investigate her conduct leading to the ruling.

A judge under investigation by the JSC for misconduct is suspended until recommendations are made as to what action to take.

But Justice Ndung’u is not taking the matter lightly and has sued the JSC in the High Court seeking to stop it from looking into the allegations said to have influenced issuance of the controversial orders.

The soft-spoken judge is however not new to controversy. This year has so far not been peaceful for her.

She hit the headlines in February when she threatened to sue businessman Jacob Juma (now deceased) for linking her to an alleged bribery to influence the outcome of an election petition by Kabete MP Ferdinand Waititu against Nairobi Governor Evans Kidero.

About a decade ago while serving as an MP she was also the talk of the town for spearheading the controversial Sexual Offences Act 2006 which introduced harsher penalties and jail terms for offenders.

“Kenya is becoming a nation of rapists where rapists go scot-free,” she said when she brought a motion on the floor of the House that culminated into the law.

While Ms Ndung’u advocated chemical castration for those convicted of a second sexual offence, other MPs called for physical castration or even stoning to death.

Then Health Minister Charity Ngilu quoted the Bible to back the call by Ms Ndung’u.

“The Bible says that if any part of the body causes you to sin, it should be removed,” she said.

Although most men castigated her for her tough stance on sexual offence, she stood firm and even won the coveted Kenyan chapter of the United Nations Person of the Year Award in 2006 as well as the International Commission of Jurists (ICJ) Jurist of the Year for her efforts in fighting for gender equality.

Her year was capped by then President Mwai Kibaki’s decision to award her the Elder of the Burning Spear (EBS) title, a prestigious state commendation.

But Ms Ndung’u was not done with her fight for gender equality. She successfully introduced a motion in Parliament that saw the amendment of the Employment Act to guarantee women a compulsory three-month paid maternity leave, excluding their annual leave.

She also pushed for granting new fathers two weeks paternity leave to tend to their new children and deletion of a clause that required private employers who pay maternity costs for staff to be reimbursed by the National Social Security Fund (NSSF).

Her appointment as Supreme Court judge raised murmurs among some critics who viewed her as an ‘activist” given her past performance in Parliament when she constantly vouched for gender equality.

Some critics also viewed her as “a green horn” not fit for the big shoes in the highest court on the land owing to her inexperience as a judge.

Close colleagues however view as a level headed but laid-back, always avoiding paths that are likely to trigger controversy. In court she treats litigants warmly and patiently waits for them to argue their case.

The 50-year old started her career as a state counsel at the Attorney General’s office in 1989, where she stayed until 1993.

She was to join the Institute for Education in Democracy as a programme officer and worked until 1995 when she was employed as a national protection officer at the United Nations High Commissioner for Refugees (UNHCR).

Justice Ndung’u worked for the Organisation for African Unity (OAU) from 2000 to 2002 as a political analyst. She ventured into politics in 2003 when the National Rainbow Coalition (Narc) gave her a nominated MP post which saw her sit in several House committees.

During her term in the 9th Parliament, Justice Ndung’u sat on the Parliamentary Select Committee on Constitutional Review, as well as the Departmental committees charged with Administration of Justice and Legal Affairs, and that of Defence and Foreign Affairs.

Gender advocate Njoki Ndung’u kicks up supreme storm It is the duty of every judge to make decisions and legal interpretations and so Justice Njoki Ndung’u of the Supreme Court made hers. Her decision to allow Deputy Chief Justice Kalpana Rawal and fellow Supreme Court Judge Philip Tunoi to remain in office until suits they