Economic activity slows down ahead of General Election 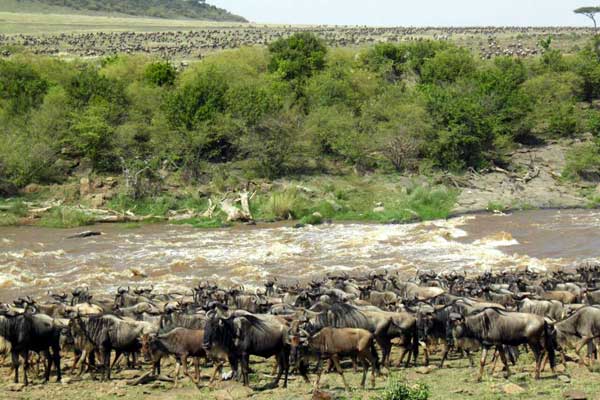 Wildebeest graze in the Maasai Mara National Reserve on Sunday. Tourists have flocked to the wildlife sanctuary ahead of the annual migration, shrugging off fears of potential violence during the forthcoming elections. PHOTO | GEORGE SAYAGIE | NATION MEDIA GROUP

Economic activity slows down ahead of General Election

The cost of the August 8 General Election on Kenya’s economy has started to emerge, with firms scaling down production, investors holding on to their cash and neighbouring countries redirecting their cargo to Tanzanian ports, away from Mombasa.

Foreign governments, especially in the West, driven by uncertainty, have stepped up travel advisories to their citizens in the country and those intending to visit, warning that “in the past, some political protests, rallies and demonstrations have turned violent.”

International organisations whose business is outside the provision of humanitarian services and foreign firms have given their staff permission to leave for neighbouring countries a week before and stay until a week after the elections, citing uncertainty over the poll, whose main contenders are Jubilee’s President Uhuru Kenyatta and National Super Alliance’s Raila Odinga.

Sources in the business community who sought anonymity for fear of being seen to be painting a grim picture over the elections said a majority of companies had scaled down production, while investors are holding onto their finances awaiting the outcome of the elections.

They were particular that banks, which are normally hard hit with uncertainty, had limited the amount of loans lent to individuals until after the elections, with one of the sources saying they were lending out a maximum of Sh5 million.

READ: Fear of chaos real as police assure of peace

However, businessman Vimal Shah played down fears within the business community, saying: “So far, so good. I don’t know of any business that has suffered as a result of the election fever. People just want to create unnecessary fear that the country may be rocked by violence during the elections.”

Mr Shah, however, expressed fears that the tourism sector may experience a drop in arrivals.

“Yes, we may see tourists keeping away around the election date because of the fears,” he said but sought to assure Kenyans that the main political players in the election had committed themselves to upholding peace.

“All the main players have committed themselves to maintaining peace during the election so there is no cause for alarm.

People should be given time off to vote on August 8 and immediately go back to work.

There is no point giving public holidays on August 9, 10th and 11th. For what? Let people vote and go back to work,” he said.

Kenya’s main trading partner in the region, Uganda and East Africa Community members Rwanda and Burundi have also quietly moved their cargo business to Tanzania as they adopt a wait-and-see approach to the elections.

Even though Ugandan High Commissioner Angelina Wapakhabulo said Kampala had not instructed businessmen to use the Port of Dar es Salaam instead of Mombasa Port,  she explained that investors were free to make their own decisions to serve their interests.

“We have not given such advise to our people, but of course, individual traders can make their own personal decisions.

Mr Gideon Badagawa, the executive director of the Private Sector Foundation of Uganda called on Kenyans to learn from past experience and hold a peaceful election to protect their businesses.

“We have seen both the main contenders commit to peaceful elections and calling on their supporters to avoid violence.

Of course that is easier said than done, but we are hopeful that the environment for business shall not be distorted,” he said.

While the port of Mombasa has seen increased activity early in the year, handling 7.2 million tonnes of cargo between January and March against 6.5 million in a similar period last year, the fear that violence could break out after elections has sent traders to the smaller and costlier port of Dar es Salaam.

Mr Joseph Nkandu, the executive director of the National Union of Coffee Agribusiness and Farm Enterprises, a farmers’ organisation in Uganda involved in the production and export of coffee, said that for security reasons, businessmen should take the Dar es Salaam port as an option.

“Definitely this is more of an individual’s decision than a country strategy. All of us as exporters and government of Uganda must join hands for plan B, Tanzania,” he said.

Kenya was forced to compensate Ugandan and Rwandese traders for losses amounting to Sh158 billion incurred in the 2007/2008 post-election violence.

At least 16 Ugandan and Rwandan traders saw their trucks and goods destroyed along the Northern Corridor — the Nairobi-Eldoret-Kampala Highway — and they all claimed compensation from Kenyan authorities.

The UK, France, Spain, Canada, Australia and Russia have updated advisories to  their citizens and those intending to travel to Kenya, although they have been careful to add the rider that they do not anticipate chaos during the elections and that they were issuing the warnings based on past examples of violence and demonstrations.

For instance, Australia’s Department of Foreign Affairs and Trade renewed its advisory on Tuesday, focusing on the recently gazetted curfews and revising its existing warning, which was last posted in June.

“Avoid political rallies and protests as they may quickly turn violent,” the department says on its website.

In its warning, the UK alerted its citizens that rallies and protests may take place in the lead up to, during and after elections.

“In the past, some political protests, rallies and demonstrations have turned violent. During this period you should exercise a heightened level of vigilance and take care in public places where people gather.”

In the formal sector, companies have been asking employees to be careful  and to be alert in case there is a flare-up of violence during the period after the elections.

At one of the telecommunications firms, an employee said the expatriates are planning to leave the country and come back on August 20.

An employee of a Westlands-based bank said some of the staff have been asked to provide details of where they live, their polling stations and where they intend to be during the week after voting.

This information would be useful for the company in case it needs to evacuate its staff or provide transport during the elections.

Employees have also been encouraged to take their annual leave during the month of August, making it easy for the staff to take care of themselves and ensuring the company does not lose man hours if the employees decide it is not safe to venture out of their neighbourhoods and be away without official leave.

“We have activated a business continuity plan that will allow our client service teams to work from their respective homes, an identified offsite location with the necessary office amenities and also from the office, if the situation allows,” he said.

The plan provides specific operating plans, redundant resources and infrastructure for the company’s clients, staff and even suppliers, he said.

“By nature, an electoral process/period calls for security self-awareness due to the obvious political tensions. It is, therefore, important for all our stakeholders to conduct themselves in the proper manner to avoid triggering unnecessary tensions that could lead to violence,” said Mr Wachira.

In the tourism sector,  the Kenya Association of Hotelkeepers and Caterers (KAHC) explained that worries over the elections had made potential international visitors to put off their holiday plans until after the elections.

“Normally, the high season, which is characterised by higher number of international tourists, begins in mid-July.

But due to next month’s General Election, foreign holidaymakers are very few,” he said and pointed out that tourism in the resort towns of Malindi and Watamu in Kilifi County had hit its lowest ebb.

“Hotels in Malindi and Watamu which closed down during the low season were expected to be reopened by mid-July. But this time around, some hotel owners have decided to resume operations after the elections,” he said.

Hotel occupancy in Malindi and Watamu, he added, was below 10 per cent, owing to an international  tourist drought.

In Mombasa, Mr Ikwaye said hotels had 50 per cent guest numbers due to conferences and domestic tourists ferried to the country’s tourism hub by the new Madaraka Express trains.

“Tourism has been slowed down by the perception that the next month’s elections might turn chaotic. But if all goes well, we expect the industry to boom in the last quarter of 2017,” he added.

Economic activity slows down ahead of General Election Reviewed by samrack on July 26, 2017 .

Wildebeest graze in the Maasai Mara National Reserve on Sunday. Tourists have flocked to the wildlife sanctuary ahead of the annual migration, shrugging off fears of potential violence during the forthcoming elections. PHOTO | GEORGE SAYAGIE | NATION MEDIA GROUP  Economic activity slows down ahead of General Election The cost of the August 8 General