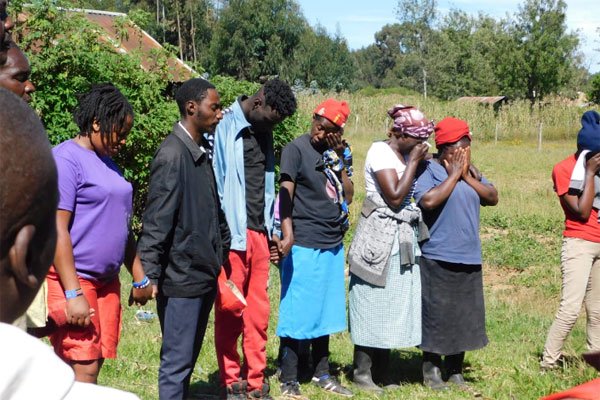 Has it ever occurred to you that your teenage son or daughter could be contemplating taking their own life? How often do you monitor your child’s behaviour and possible irregularities?

For most parents and guardians, child suicide is not only inconceivable but also absurd. While withdrawal and depression among children signal underlying problems for most caregivers, suicide is usually off the table.

In the recent past, the country has been thrown into a social tumult following multiple incidents where children, some as young as seven years, have taken their own lives.

Last week, the family of Samuel Ndung’u, 15, found his body dangling from the ceiling of his room in Karia-Ini village in Kinangop, Nyandarua County.

Ndungu, an initiate, was recovering after undergoing the cut when the results of the Kenya Certificate of Primary Education (KCPE) examination were announced.

According to his father, David Njoroge, the teenager was disappointed by his poor performance in the exam, which he suspects pushed him to take his own life.

Saturday Nation learnt that after receiving the results, the family had decided to keep them a secret until after he had recovered. They suspect that someone leaked the bad news to Ndung’u. It is then that the teenager made the drastic move to end his life.

In a rather bizarre incident in July this year, Dennis Ngugi from Kiambogo, Nakuru County, hanged himself at the pulpit of a local church, leaving behind a suicide note but whose contents, the family declined to disclose.

In the weeks preceding his death, Ngugi, 18, had threatened to kill himself, his family said. Then on the morning of Sunday, July 7, he made good his threats. His cold body was found at the pulpit of Mothaiti Presbyterian Church in Gilgil.

Kenyans are yet to recover from the shocking death of Vicky Jackline Chepng’eno, a pupil at Kabiangek Primary School in Bomet County, who committed suicide after she was allegedly scolded by her teacher for soiling her clothes during her menses.

So, what is fuelling this tragic trend? Why are Kenyan children going to the extremes of taking their lives?

Sheila Wachira, a child counsellor and clinical psychologist, says that loneliness, lack of psychosocial support both at home and in school, and pressure to perform well in school could be contributing to suicide among children.

For those in relationships, Sheila says, a break-up could also motivate suicide ‘‘since they lack the mental maturity and strength to handle disappointment’.’

Suicides among adults, though unfortunate, are a common occurrence around the world. But when children end their own lives, it becomes a scandal of a worrying magnitude.

The psychologist, though, notes that a child cannot just wake up one day and end their life, and that suicide is usually a result of deep-seated stresses that have accumulated over time.

She says: ‘‘When a child commits suicide, they are telling the caregiver, ‘look, I had problems but you didn’t listen or pay attention’. As a parent, you must be in your child’s world.’’

Experts also argue that the country’s moral fabric has snapped, plunging the nation into shameful and painful depths. They lament that this trend has exposed a country that is deeply flawed socially.

Statistics from the World Health Organisation (WHO) show that suicide is the second leading cause of death among 15-29 year-olds. Perhaps even more shocking, 78 per cent of suicide-related deaths in 2015 around the world took place in developing countries, where Kenya falls.

According to WHO, Kenya has no vital registration data to help estimate suicide rates directly due to lack of proper data on the causes of death.

In a study conducted by Kemri-Wellcome Trust, the criminalisation of suicide in Kenya in the Penal Code and cultural stigma against it are the main reasons for the poor state of data on suicides.

Furthermore, misclassification of deaths by other causes such as accidents and a lack of suicide report verification using coroner certificates are the other reasons for the scanty data on suicide rates.

And without a specific place to get reliable data on suicide, the government and the citizenry are always ill-equipped to fully comprehend, diagnose and tackle the issue of suicide in Kenya, the report says.

The report proposes interventions within the health, legal and criminal systems to improve data collection, reporting and handling of suicide and suicide cases in Kenya.

Sheila says parents and teachers ought to be on high alert and monitor any slight change in mood and behaviour of their children, and to take action immediately.

‘‘If your child isolates himself or herself, it could be a sign of stress. Keep a close eye on what your child posts on social media, for those who have accounts. This would expose signs of anxiety and depression early enough,’’ she advises.

Mind-boggling cases of teenage suicides have hit Bomet and Kericho counties in the South Rift region in recent months, with schoolchildren being the worst affected.

In the majority of cases, the victims have killed themselves by hanging, either in their rooms or within their home compound.

‘‘Children, like adults, know that hanging is the surest way to die. Today, children are more exposed than before. They hear cases where people have taken an overdose of drugs to die only to be unconscious and survive,’’ she observes.

‘‘Sometimes they don’t know what pills to buy. They go for hanging because it’s not only cheap but highly effective as well,’’ she adds.

The internet, Sheila says, has also made it easier for children to search for different ways of killing oneself.

Except for Ngugi who took his life in a church building, all others have done so in familiar surroundings, closer to their families.

In the case of Chepng’eno, she left for home after she was sent to get fresh sanitary pads. She narrated her humiliating ordeal to her mother and grandmother, both who comforted her, telling her it was normal to experience her menses.

Three hours later, her body was found dangling from a tree. She had used a scarf to take her life.

The teacher involved has since been sent on compulsory leave as the Teachers’ Service Commission (TSC) probes the matter.

Lilian Cheptiony, a woman rights activist in Konoin Sub-county in Kericho County, argued that the loss would have been prevented had the teacher been responsible enough.

“There is an urgent need for the Ministry of Education to train teachers on counselling to help them deal with cases of suicide and depression among the learners,” said Ms Cheptiony.

Others blame parents and guardians for abdicating their duty to counsel their children.

‘‘Parents have left the role solely in the hands of teachers who are equally overwhelmed as a result of the high number of learners they are handling,” says Malel Langat of Kenya National Union of Teachers, Bomet.

The psychologist says that as a parent, you should get concerned when your child locks themselves in their rooms for many hours.

‘‘If they suddenly lose interest in an activity that excited them, talk to them to find out what is troubling them,’’ Sheila says.

Incidents of suicide among children have sent parents, administrators and teachers in guidance and counselling in the country into panic mode, as they seek answers for this disheartening trend.

According to Kericho County Commissioner Moses Mbaruku, about 12 suicide cases are reported in the country every month. Mbaruku attributes this to rampant alcoholism and stress, saying that this has a domino effect on their dependents.

Sheila agrees, noting that when parents are hopeless as a result of poverty and unemployment, this affects their children too. According to the psychologist, children from unhappy families where either or both parents are involved in drug abuse and alcoholism are more likely to resort to suicide to escape the misery than children from happier families.

She advises parents to actively engage their children in different activities to monitor them.

‘‘Be present in your child’s life. Not just physically, but emotionally as well,’’ she says.

Reading books on parenting and consulting professionals would also help to stem the crisis of children suicides, she notes.

Milka Muswa, a counsellor at Masinde Muliro University of Science and Technology, agrees, saying that children are crying out for attention from their parents who have abandoned supporting them emotionally.

“Showering your children with material things when all they need is parental love is misguided. It’s time caregivers took their parenting responsibility more seriously,” Muswa says.

Lily Kitala, the director, Stepping Stones Elementary School in Nairobi, says that sometimes there is mistrust between learners and guidance and counselling teachers, which hampers any possibility of discovering whatever may be troubling them.

In Migori County, suicides among children have increased by double margins between 2018 and 2019, with 25 cases recorded this year alone, the highest ever in the county. There are, however, no clear records on suicides.

County children’s officer John Odinya says suicide among youths were relatively rare and their frequency relatively stable for many years.

Today, he says, suicide has become the second most common cause of death among teenagers and young adults, overtaking homicides and outnumbered only by road accidents.

“If children started to die at these rates from a new infection, there would be a huge national outcry. It is sad that this is not recognised as the public health crisis it has become,” Odinya says.

In Kirinyaga County, five teenagers have committed suicide since the beginning of the year. The victims are aged between seven and 17.

Jim Njoka, the county commissioner, laments about the tragedies, and has appealed to religious leaders to seek divine intervention to save the young generation.

‘‘It is not normal for underage children to take away their lives,’’ Njoka says. ‘‘Prayers are required urgently to seek God’s intervention.’’

Kirinyaga County police boss Dolly Oduor has likened cases of suicide among children in the county to a curse. ‘‘I was recently posted to this area but I’m shocked that even little children are hanging themselves,’’ Ms Oduor said.

Has the country had the last throw of the dice? Could Kenya sink deeper? Sheila believes there is still hope.

‘‘We haven’t hit rock bottom yet, but we must acknowledge that we are in a serious crisis as a society. If this matter is not addressed with urgency, it could be a ticking time bomb,’’ she warns.

Does your child show suicidal tendencies? Reviewed by samrack on November 30, 2019 .

Share thisFacebookTwitterPinterestEmailWhatsAppOnlookers at the scene where a nine-year-old boy allegedly committed suicide in Nyandarua. PHOTO | WAIKWA MAINA | NATION MEDIA GROUP  Does your child show suicidal tendencies? Has it ever occurred to you that your teenage son or daughter could be contemplating taking their own life? How often do you monitor your child’s behaviour