How the home has turned into a deadly place for women

How the home has turned into a deadly place for women

More than 148 Kenyans were killed over the past one year in gender-related violence, confirming that the problem is pervasive across Kenya, reveals a Nation Newsplex investigation.

The deaths included 16 children, show the findings contained in Murder at Home, a Newsplex project that explores the consequences of gender-related violence on communities throughout Kenya.

“People who kill plan long before they commit the crime. Those around them miss the obvious signals because they convince themselves that society is as good as it used to be, back when people cherished and did not kill children,” says Prof Owour Olungah.

Intimate partners accounted for four in five of the deaths. Nearly 80 percent of those who lost their lives to spousal violence were current and former wives and girlfriends, confirming that home is the most dangerous place for women. Current and former husbands and boyfriends constituted about a fifth.

Among the deaths documented by the project is that of the late Boniface Onyango. For a long time, there were tell-tale signs that his marriage would end badly, but when his three-year-old son was found strangled in his house in Nyadhi village in Alego Usonga Sub-County, Siaya, on a Sunday evening early this month, relatives could not believe he was the murderer. Many of them only accepted the bad news when his body was found six days later at the Ambira Sub-County Hospital mortuary, where it had been taken after a farmer stumbled upon it along the banks of River Nzoia.

The deaths of the father and son came with clear warning signs. It all started four years earlier when Boniface, a steward at a five-star hotel in Nairobi, met his soon-to-be wife, Josephine. For him it was love at first sight and they soon got married and settled in their rented home in Riverside, Ruaraka, where a few of his relatives also lived.

Not long afterwards, she got pregnant, but their happiness was short-lived as the couple’s domestic rows became frequent. Relatives intervened on several occasions but Josephine felt that they always took his side. Feeling outnumbered, she convinced him that they move to another estate, Lucky Summer, in Baba Dogo.

Restless and bored with being a housewife she got a job as a barmaid, a move that her husband saw as a slap on his face. Embarrassed by his wife’s occupation, he used his connections to get her a job as a support staff in an eye clinic on the outskirts of the city centre. But their relationship did not improve as Boniface soon became insecure, believing that his wife was cheating on him with other men, a claim she denied. He told a relative that he once found her with a man at their house.

Their fights intensified to the point where she left him, taking their son with her and vowing never to return. He seemed to have accepted the breakdown of their marriage. He even moved the furniture they had bought together to his rural home and returned to the life of a bachelor. But the couple reconciled and separated on two other occasions before the fateful Sunday.

Prof Owour Olungah, an anthropologist at the University of Nairobi, says many victims reconcile with their abusers because they suffer from learned helplessness, which happens when victims become conditioned to believe that a situation is unchangeable and convince themselves that the violence is culturally appropriate.

A few weeks to the deaths, Boniface’s wife took their three-year-old son to be cared for by her mother in Kitale and returned to Nairobi alone. This angered Boniface, who got a letter from the Department of Children’s Services allowing him to go take his son. He then went to his mother-in-law’s home in Kitale accompanied by police officers, got custody of his son and set off for his rural home in Siaya County.

He arrived bearing gifts for his son and mother. Later in the day, he left his mother’s house with his son for his house, where the body of the child was found by a relative later in the evening. Boniface was missing.

Relatives pointed to the shopping and his happy disposition earlier that day as proof that he had not planned to harm his child. They speculated that the wife must have communicated something bad to trigger him to harm their son.

But Prof Olungah says the shopping and his acting joyful was probably a ruse so that no one would suspect the callous act he was about to do. “People who kill plan long before they commit the crime. Those around them miss the obvious signals because they convince themselves that society is as good as it used to be, back when people cherished and did not kill children,” he says.

Overall, nearly three-quarters of those killed (106 people) were females, while more than a quarter (42 ) were males. However, two in five (16 ) of the males who died committed suicide after they murdered an intimate partner or child.

Generally, men were perpetrators in more than three-quarters of the murders while females were involved in nearly a fifth. The gender of the killers was unidentified in six percent of the killings because they fled the scene after committing the offence or were part of a mob or gang.

Murder at Home is compiled from media and court reports. The analysis covers October 1, 2018 to November 15, 2019.

Experts say homicide represents the most extreme form of violence against women, a lethal act on a continuum of gender-based discrimination and abuse. 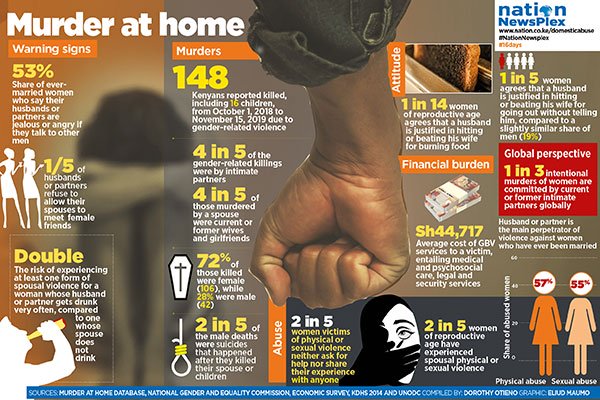 One in eight of the killings, in which the age of the victim was provided, involved children, with the youngest being two and the oldest 16. In 44 percent of the cases minors died after they were caught in the web of violence involving their parents, reveals records from Murder at Home.

Among the children who paid the ultimate price were two siblings – Jane Muruge, seven, and Michael Njoroge, two, who were killed by their mother in July this year after she hacked their father to death with an axe while he was sleeping. The 32-year-old food vendor then hanged herself with a rope in their house in Nairobi. Her husband had several times reported to the local chief that his wife was abusive.

In another incident that happened this month, Shanice Maua, 10, and Prince Michael, five, were allegedly strangled by their father, a military officer, while their mother Joyce Syombua was hit multiple times on the head. More than three weeks after the three went missing Major Peter Mwaura Mugure of the Laikipia Air Base in Nanyuki led the police to an abandoned cemetery, where they found the bodies in a shallow grave. In this case, as in many of the documented cases, the couples were estranged and separated.

Prof Olungah says that parents and society must ensure girls have the life skills to cope with issues such as gender-related violence. “We should train girls to pay attention to their sixth sense for them to see danger before it’s too late,” he says.

Experts say negative masculinity is also to blame for the rampant gender-based violence. Prof Olungah says socialisation of masculine ideals starts at a young age. He gives the example of a boy who is raised in a family where his parents show him preferential treatment over his sisters and as he gets older he is told that men are the family providers. The message he gets is that boys matter more than girls. But in school the child learns that anything men can do women can do too. The media too exposes him to another alternative view that glorifies violence and money and reinforces the message that one should get rich at all cost. When he completes his education he fails to get a job and is stuck at home. “The result of the contradicting messages and realities is an emotionally unstable person,” says Prof Olungah.

As the pressure to meet the ideal masculine construct intensifies, some men adjust and manage while others succumb to stress, become depressed and turn to harmful behaviours such as violence and heavy drinking. Data from the Kenya Demographic and Health Survey 2014 indicates that women whose husbands or partners drink very often are twice as likely to suffer from spousal abuse as those whose intimate partners are teetotallers.

Dr Olajide says there appears to be a normalisation of gender-based violence where a case is reported in the news, and there is no follow-up.

“We need to get information out a lot more. We need to enhance our response services and ensure victims are removed from abusive situations so that they don’t suffer the same problem over and over. And of course the law must be enforced against lawbreakers,” he says.
In the over one-year period under review, April recorded the highest number of killings (26) followed by February (21), and May and August with 18 each.

The deaths occurred in 33 counties. The counties that recorded most killings are Nairobi (21), Nakuru (19 each), Uasin Gishu (12), Kakamega (eight) and Machakos (seven).

On several occasions intimate partners sought help from others to kill. In one such case, a trader, Purity Wanjiru, and her mother Ann Katita were shot dead as Purity and her husband drove into their compound after Ann opened the gate. Wanjiru’s husband was shot in the arm and leg and hospitalised. A GSU officer later confessed that the husband had hired him together with another gunman to commit the double murder.

Many killings involving intimate partners are gruesome predictable, and include close encounter such as stabbing, strangling and striking. In more than half of the cases, blunt and sharp objects such as nail-studded club, hacksaw, machetes, knives, jembes and axes were used.

In one in six murders, the victim was strangled. Such was the fate that befell Lydia Achieng’, a teacher who was strangled and her body burnt with acid in her home in Kisumu. Her body was discovered when neighbours spotted her two-year-old baby crawling out of the house with blood-stained clothes. Neighbours found the woman’s body covered with a blanket and they told the police that they had earlier seen a man the woman had introduced as her boyfriend leave the home hours after the incident.

Globally, one in three intentional murders of women are committed by former or current intimate partners, according to the United Nations Office on Drugs and Crime.

While many of the suspected murderers were arrested, it is likely that most of the cases will not be completed. During the period under review, Murder at Home found only six reported cases where suspects accused of gender-related murder or attempted murder were convicted. Half of them were men and the others women.

Clearly, society still has not found a way to consign the vice to the past, with intimate partner violence accounting for the majority of Kenyan women’s experiences of violence.

Tags: How the home has turned into a deadly place for women Intimate partners accounted for four in five of the 148 gender-related deaths in the past year
Previous Post