DID JEFF KOINANGE SET UP BONIFACE MWANGI ON JKL? 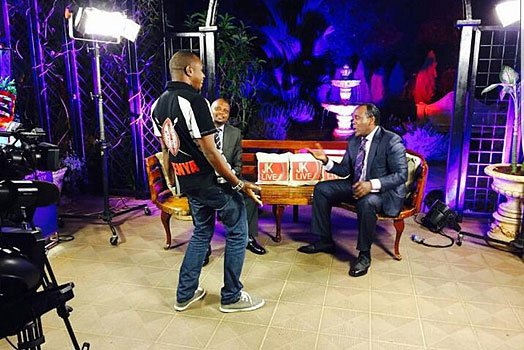 DID JEFF KOINANGE SET UP BONIFACE MWANGI ON JKL?

Human rights activist Boniface Mwangi has defended his decision to walk out of a live television show hosted by Jeff Koinange on Wednesday night.

The activist has accused the show’s host of reneging on the terms for his appearance in the show.

“The show started well and we had barely warmed the bench when Jeff pulled a fast one on me. Moses Kuria, someone with several hate speech court cases, walked in. I immediately stood up and walked out on principle. My values wouldn’t allow me share the same platform with Kuria,” Mr Mwangi later explained on his official Facebook page.

“I will not share a platform with hate-mongers, thieves, and their apologists. My values are more important than TV airtime,” he added.

Mr Mwangi, a former journalist, has been a constant critic of corruption in the Jubilee government and has been at loggerheads with senior government officials including Deputy President William Ruto. The duo is currently fighting out a defamation case in court.

In his response, Mr Kuria, who insisted he had walked into the interview without an invite, blasted Mr Mwangi as a “morally corrupt” young man.

The legislator defended Jubilee’s record in the face of the recent corruption reports.

He even swore he would resign if it can be confirmed that the Sh5 billion scandal at the Ministry of Health was factual.

DID JEFF KOINANGE SET UP BONIFACE MWANGI ON JKL? Reviewed by samrack on November 3, 2016 .