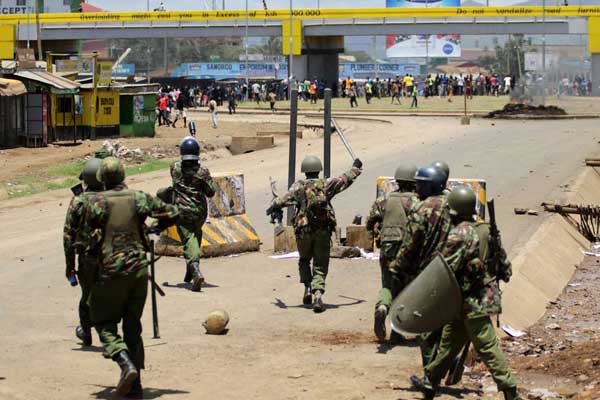 Protesters engage anti-riot police in running battles during anti-IEBC demos in Kisumu in 2017. A US human rights report published on Friday, April 20, 2018 has said that impunity for criminal actions and corruption are commonplace in Kenya. PHOTO | FILE | NATION MEDIA GROUP

Corruption on the part of government officials and impunity for criminal actions remain commonplace in Kenya, the US State Department says in its latest annual human rights report published on Friday.

“Despite some progress in fighting corruption during the year, the government did not implement relevant laws effectively, and officials frequently engaged in alleged corrupt practices with impunity,” states the 50-page Kenya section of the global survey.

The report examining conditions in 2017 represents the first accounting of human rights to be carried out solely under the aegis of the Trump administration.

The new report’s depiction of Kenya as a country plagued by official lawlessness and human rights violations does not differ substantially from the yearly assessments conducted during the Obama administration.

Officials at all levels of government in Kenya were able to evade responsibility for crimes committed “despite public statements by the president and deputy president and police and judicial reforms,” the new report finds.

It cites last year’s Ernst and Young Fraud Survey in which 90 percent of respondents agreed that corruption is widespread in business.

The US points to numerous violations of human rights experienced by Kenyan citizens.

These are said to include unlawful and politically motivated killings, forced disappearances, arbitrary arrests, torture, life-threatening prison conditions and “an inefficient judiciary.”

Violence against women, including rape and female genital cutting, also goes unpunished in many instances, the State Department says.

Police violence resulted in the deaths of at least 35 Kenyan civilians following the August 8 elections, according to what the State Department describes as “credible reports.”

There were no reports of police deaths or injuries during that period, the US observes.

These killings were allegedly due to both police action and mob violence.

Kenya’s prison population is nearly twice the size of what he country’s facilities were designed to house, the report notes.

Citing Prison Service statistics, the study says the number of prisoners stood at 50,572 as of last October, compared to a designated capacity of 26,837.

Lengthy pre-trial detention is a contributing cause of prison overcrowding, the report suggests.

Although the government claims the average time spent in detention is two weeks, “there were reports many detainees spent two to three years in prison before their trials were completed,” the State Department notes.

When cases are finally adjudicated, the conviction rate proves to be only 13 to 16 percent, the report observes, attributing this outcome to “poor casework, incompetence and corruption.”

Many arrests are arbitrary, the report adds.

Police are also said to accuse arrested persons of crimes more serious than those they had actually committed, while charges are sometimes brought in order to mask underlying police abuses.

Kenya’s government occasionally engages in direct restrictions on freedom of the press, the report says.

In addition, “journalists practiced self-censorship to avoid conflict with the government on sensitive subjects, such as the first family,” the US states.

The government influences reporting through its status as the largest source of advertising revenue for Kenyan media houses, the report adds.

Corruption, impunity continue to plague Kenya: US report Reviewed by samrack on April 21, 2018 .

Protesters engage anti-riot police in running battles during anti-IEBC demos in Kisumu in 2017. A US human rights report published on Friday, April 20, 2018 has said that impunity for criminal actions and corruption are commonplace in Kenya. PHOTO | FILE | NATION MEDIA GROUP Corruption, impunity continue to plague Kenya: US report NEW YORK,