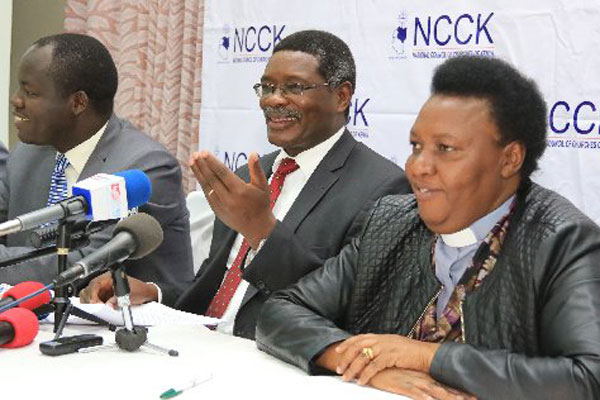 The National Council of Churches of Kenya (NCCK) Secretary-General Peter Karanja (centre) address the media at Jumia conference and Country home, Limuru on April 22, 2016. NCCK has called for the reconstitution of the Independent Electoral and Boundaries Commission and the Supreme Court ahead of the 2017 polls. PHOTO | JEFF ANGOTE | NATION MEDIA GROUP

Protestant churches on Friday called for the disbandment of the electoral commission and the cleaning up of the Supreme Court to ensure free, fair and peaceful 2017 elections.

Parliament, they noted, should begin the removal of the commissioners following claims that the electoral body had lost its independence since the last polls.

Under the National Council of Churches of Kenya, they said the integrity of the next elections would only be safeguarded if the two institutions were cleared of corruption claims that have tainted them.

The statement comes two weeks after Catholic bishops also raised the red flag about allegations of corruption in the Independent, Electoral and Boundaries Commission and Judiciary.

The churches’ council said a credible process would enable voters to pick leaders who will be ready to fight corruption and other ills facing the nation.

They added that the two institutions played a critical part in the electoral process calling for them to be cleaned of the dirt that have stained their reputation since the 2013 elections.

Their concerns were on Friday backed by the Centre for Multiparty Democracy and the Kenya National Commission on Human Rights that also raised fears that the next polls could be chaotic if credibility issues at electoral body were not dealt with.

According to them, the only way was to reconstitute commission and the highest court in the land before the August 2017 General Election.

One of the suggestion the churches gave was cutting short the employment contracts of the current commissioners and pick fresh ones.

“One of the options may be paying off the current commissioners for the remainder of their term. It might be hard for the commissioners to discharge their duties effectively in the face of alleged corruption cases that have tainted their credibility,” said the churches in a statement read by churches’ General Secretary Peter Karanja at Jumuia Conference and Country Home in Limuru, Kiambu County. The churches have been meeting there over the last three days to deliberate on issues facing the country under a year to the 2017 elections.

During their address, the Catholic bishops expressed similar sentiments where they asked Kenyans to demand a credible electoral body and an unquestioned Supreme Court before the polls.

Addressing the media on Friday at the end of the Limuru meeting that brought together churches’ executive committee, the clergy raised concern that the institutions Kenyans looked up to for fair elections were already soiled by claims of graft and lack of independence.

“This executive committee recognises that the credibility of the Supreme Court of Kenya is critical as we approach the 2017 General Election. We, therefore, call for a quick conclusion of the matters of concern that include investigations of judges on allegations of corruption,” they said.

However, since the last elections, commissioners including chairman Issack Hassan have been questioned on their role in the Chickengate scandal in which the commission awarded ballot papers printing contracts to Smith and Ouzman, a British firm.

The Opposition has also accused the commission of working closely with the government.

Cord leader Raila Odinga is expected to lead a rally at Kamukunji Grounds in Nairobi today where the coalition says it will start the push for the disbandment of the electoral commission.

“The most significant reason for malcontent and violence could be the commission if we would not agree on ensuring its credibility to conduct the next elections,” said the Rev Canon Karanja.

Further, the churches also called for national dialogue bringing together all political parties before the end of the year to comprehensively look at challenges facing the country and agree on their solutions.

Centre for Multiparty Democracy chairman Omingo Magara said that failure to address problems facing the electoral commission and the Judiciary was a recipe for a shambolic election.

Chief Justice Willy Mutunga is vacating office mid this year while his deputy Kalpana Rawal has contested a decision to retire upon reaching 70.

Share thisFacebookTwitterPinterestEmailWhatsAppThe National Council of Churches of Kenya (NCCK) Secretary-General Peter Karanja (centre) address the media at Jumia conference and Country home, Limuru on April 22, 2016. NCCK has called for the reconstitution of the Independent Electoral and Boundaries Commission and the Supreme Court ahead of the 2017 polls. PHOTO | JEFF ANGOTE | NATION