Former US President Barack Obama arrived in the country on Sunday for a two-day visit whose key highlight is the launch of the Sauti Kuu Foundation in Kogelo on Monday.

Clad in a Navy blue suit and white open shirt, the 44th US President disembarked from the jet into the arms of his sister, Dr Auma Obama, before he was given an official welcome by Foreign Affairs CS Monica Juma and US Ambassador to Kenya Robert Godec. 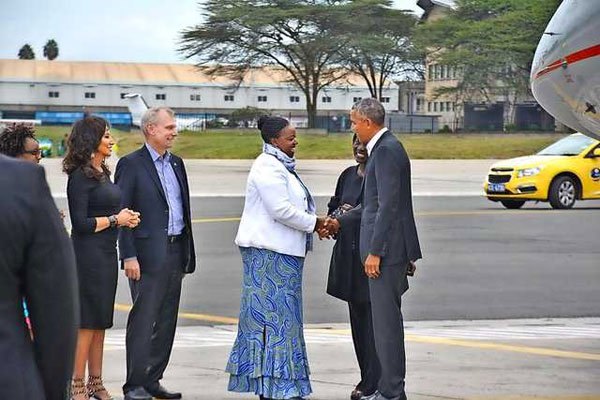 After the pleasantries, Mr Obama was whisked away to State House under tight security where he held a meeting with President Uhuru Kenyatta. He later held another meeting with ODM leader Raila Odinga at Kempinski Hotel on Waiyaki Way.

In a press release, Gina Din Communication, which is co-ordinating the visit, said Mr Obama is accompanied by his sister Maya Soetoro-Ng and her family and members of staff of the Obama Foundation.

During the meeting, President Kenyatta thanked Mr Obama for keeping the promise he made in 2015 of visiting Kenya when he completes his term as US President.

He also congratulated the former President for establishing the Obama Foundation, which seeks to empower the youth to become the agents of change that the African continent needs.

The two leaders agreed that the youth in Africa could become the continent’s most valuable asset if their energy and creativity are effectively harnessed.

They assured the former US leader that he can count on the support of all African leaders to scale-up youth programmes under his foundation.

President Kenyatta gifted the former US President — who is a celebrated author — with two books on Kenya’s youth and success stories in the last 50 years, namely Aspirations of a Generation, Youth of Kenya and Kenya at 50.

Mr Obama will on Monday inaugurate the Sauti Kuu Foundation’s project which comprises a Sports Centre and Resource and Vocational Training Centre run by his sister.

After inaugurating the Sauti Kuu Foundation and visiting his ancestral home in Alego Nyang’oma, Obama heads to South Africa where he is expected to deliver the 16th Nelson Mandela Annual Lecture in Johannesburg.

The visit to Kenya is Mr Obama’s first tour of Africa since he stepped down as the 44th President of the US in January last year.

This tour pales in comparison to his last visit in 2015. There was no Air Force One or the Beast, the two things that symbolise the power of an American president, especially while travelling abroad.