YouTubers’ campaign will plant trees in California, Kenya, and India 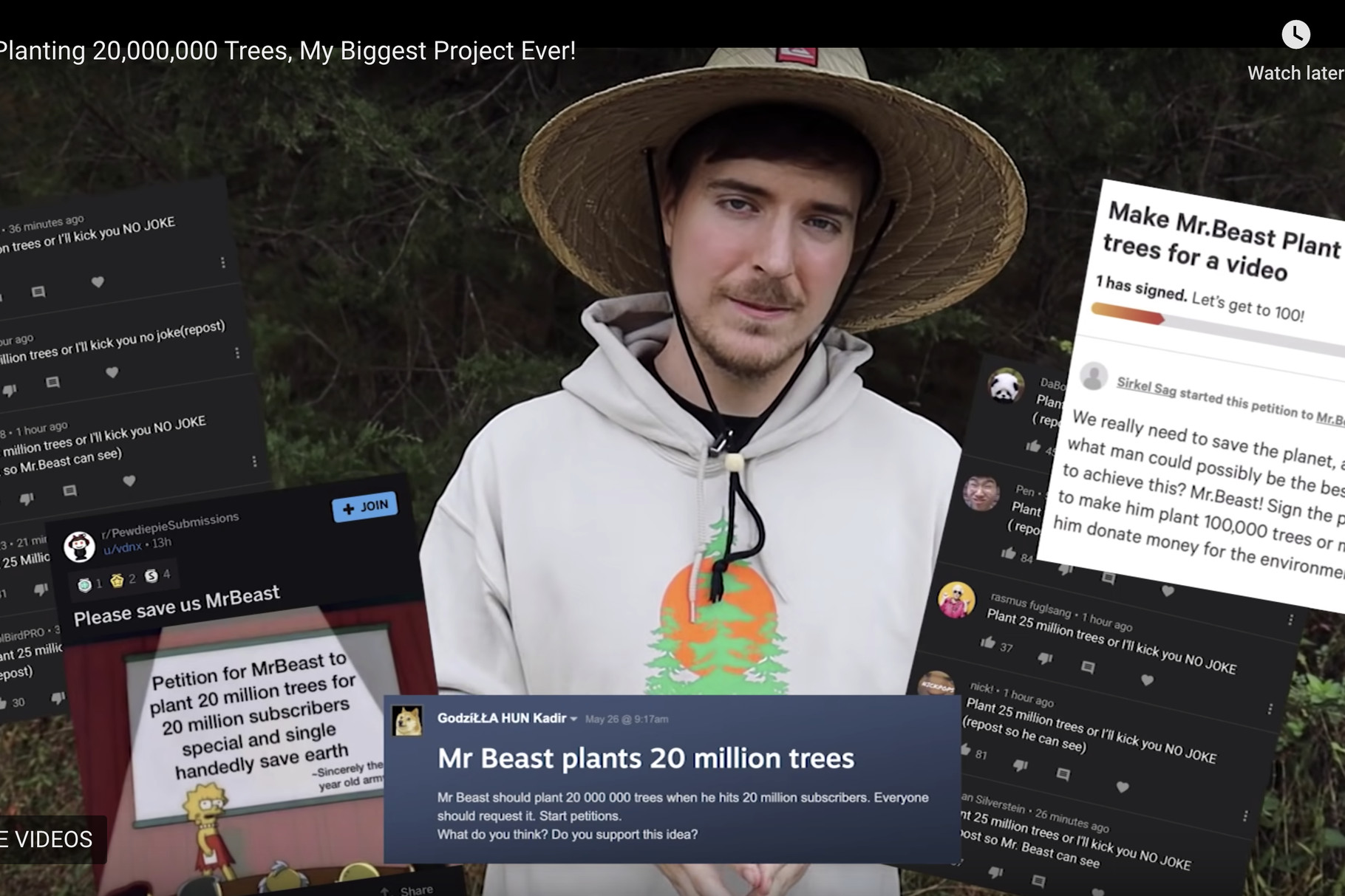 YouTubers’ campaign will plant trees in California, Kenya, and India

Jimmy “MrBeast” Donaldson set out to raise $20 million for the campaign dubbed #TeamTrees in October after reaching 20 million subscribers on YouTube. Each dollar raised would plant one tree. Some of YouTube’s biggest stars joined in the social media blitz, boosting #TeamTrees enough to reach the campaign goal by December.

Planting all of the trees will take place through 2022, according to the environmental organization Mr. Beast partnered with, The Arbor Day Foundation. The first round of planting will take place this year and will include 100,000 trees in California, 350,000 in Kenya’s Kijabe Forest, and 400,000 in Southern India’s Cauvery River Basin.

In California, the trees will replace some of those lost in catastrophic 2018 wildfires. That year, 8,000 fires scorched more than 1.8 million acres of forest. It included the deadliest and most destructive blaze in California’s history, the Camp Fire, which nearly wiped out the town of Paradise and drew attention to how climate change is fueling more intense fire seasons.

“We know that 20 million trees isn’t going to cure climate change, but the point here is to end this decade on a super strong note,” YouTuber Mark Rober said in one video promoting the campaign. Trees take in and store the carbon dioxide responsible for global warming. “It’s a constructive way to send a message to the politicians, ‘it’s freaking time to do something about climate change.’ Plus we just really love trees so this is like a fist pump to mother Earth,” Rober said.

WHERE THE TREES ARE PLANTED WILL BE CRITICAL

Where the trees are planted will be critical to whether they do good for the environment. Reforestation efforts in places that have lost trees to development or fires are best. On the other hand, planting new trees where they don’t naturally grow — like grasslands — can actually harm the local ecosystems. In September, a coalition of environmental groups in India called on Leonardo DiCaprio to stop supporting a controversial tree-planting initiativein the Cauvery River Basin. In a letter, the coalition alleged that the way the Cauvery Calling campaign was going about its tree planting might dry up streams and rivulets and wreck wildlife habitats.

The Verge asked The Arbor Day Foundation whether it is involved with Cauvery Calling, and it confirmed that the campaign is its partner in India. “By improving soil health and increasing the availability of clean water, planting trees will contribute to the overall well-being of the area. We are confident in Cauvery Calling’s commitment to and capability of planting the right trees, in the right places, for the right reasons,” a spokesperson for The Arbor Day Foundation wrote to The Verge in an email.

Making sure that the trees live a long, healthy life is just as important when it comes to taking on climate change. The trees need to survive at least as long as the carbon they store would have stayed in the atmosphere, which is about 100 years. At least one forestry project in California aimed at offsetting carbon dioxide went up in smoke during forest fires in California in 2015.

Update January 9th, 1:15PM ET: This story has been updated with a response from The Arbor Day Foundation about its partnership with Cauvery Calling.

YouTubers’ campaign will plant trees in California, Kenya, and India Reviewed by samrack on January 11, 2020 .