The year was 2003. Kenya was witnessing a rebirth of sorts as President Mwai Kibaki’s regime sought to chart a new path for the country in its first year in office after the chequered 24-year reign of Daniel arap Moi.

As the government readjustments went on, a go-getting nurse called Janet Kisaka Rangi, who was then working at the male surgical ward of the Aga Khan University Hospital in Nairobi, seized an opportunity to work in the United States.

An application process she had begun with some agents in Nairobi had borne fruit and there she was, with an opportunity to move to the US.

She quit her nursing job at Aga Khan after working for a year. She packed her belongings, left her husband behind and flew off to America, all this while expecting her first child.

It required going over a lot of hurdles for Janet, now a mother of two, to fit in the US. She eventually became a citizen by naturalisation and having lived there for nearly 16 years.

She has for the past couple of years been giving advice to those who wish to migrate to the US like her. Her counsel has majorly been about acing the vetting processes and how to settle down in America.

On Saturday, Ms Rangi launched a book, The American Success Pathways: How to Realise Your American Dreams and Desires, seeking to give in one package the advice she had been giving to individuals through e-mails and via her YouTube channel “Janet Rangi” that has more than 4,400 subscribers.

“I have spent hundreds, if not thousands, of hours digging valuable information and responding to thousands of questions. This has allowed me to garner a wealth of information that, eventually, I decided to package into a book,” she writes in the introductory sections of her 262-page book.

In an interview with Lifestyle last week, Ms Rangi flashed back to her initial years in the US.

“The reason it was difficult at first is because I went there alone. I was married and I left my husband behind. I was also pregnant. I also had other social issues like the culture shock, being in a new country, new job, a first-time mother and the worst was I didn’t know how to drive,” said Ms Rangi.

Ms Rangi added that transitioning from Kenya “where things are done for you” to the US “where you have to do them all alone” was not a walk in the park.

“It had nothing to do with my career. In fact, it helped me a lot because I always had money to give to carpool with other people and also pay for child care for my baby,” she recalled.

Ms Rangi started the path to where she is by enrolling at the School of Nursing at the University of Eastern Africa, Baraton.

After that, she interned for a year at Kenyatta National Hospital before sitting the Nursing Council Examinations. Having passed, she was registered as a community health nurse, after which she secured a job at Aga Khan.

As she worked in the US, she found a passion in blogging and vlogging (making and sharing videos).

Ms Rangi, who travelled to Kenya to launch her book, said she has seen people migrate to America and noticed the struggles they go through. Her observation is that they appeared to lack information.

“Even just talking to people here, I can see that they want to go to America and are struggling. I said, ‘Ok, there is some truth there and we need to fix this.”

She first started to make short clips about life in US and advising would-be immigrants on what not to do if you want to go there, and shared them on Facebook. To her surprise, people started asking questions which she then replied. “The responses made me go back and talk to them and that is how it all started.”

Her new book, which she says is a collection of what people have been asking, took her three years to finish and is based on her personal experiences as an immigrant to help people with knowledge of relocating abroad.

“When I started with the clips on social media, it was easy because I would get like 20 questions and I would respond. Then all of a sudden, the messages started flooding in my direct messages and they became overwhelming. I decided that I would be responding through my videos,” said Ms Rangi.

She calls her solution a different pathway to success “especially for those wishing to change their lives for the better”.

“Although nothing is promised, those who put in practice what I deliver through my regular blogs and books are more likely to succeed. We all need to search in the right places. I always say in my blogs that we need to know what the world knows because information is power,” she writes in her book. 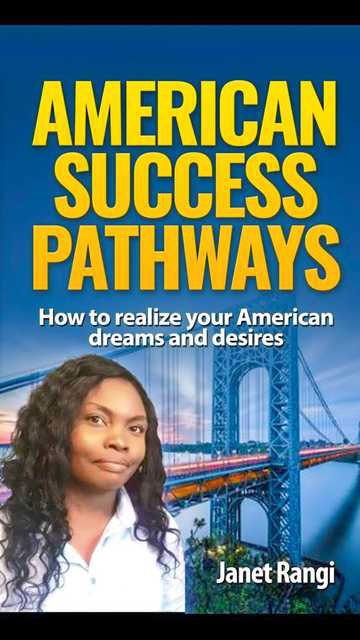 She says that because she made use of the opportunities that presented themselves to her, she feels the responsibility “to share the same with my community”.

Asked to name what people ask her most, Ms Rangi said a majority of her followers want to know how to get a Green Card, followed by people who want to apply for a visa and be successful while others want to know why they were denied visas. Those already in the US, she said, often want to know how they will transition once they get back to Kenya.

She advised prospective immigrants that despite the majority working as nurses to get Green Cards, there are many other ways to get it.

“Apart from Green Card lottery (diversity visa programme), there are many ways to get a Green Card and people have no idea on how to. There are other ways but you have to get to the US first,” she said.

She, however, noted that being a nurse once in the US is the fastest, most straight forward way to get a Green Card.

“Physical therapy is another way that people can become citizens and many people in Kenya do not know that. But to get it, one has to have a Master’s degree in the field,” she says.

In her book, Ms Rangi says the fact that the US invests heavily in healthcare creates employment opportunities for people from all over the globe.

This has created a great need for healthcare professionals, with the American educational system being incapable of churning out enough professionals to be able to work in the sector,” she writes.

In her book, she explains which jobs need high school education and which ones need one to have qualified from college or university.

Under the current regime of President Donald Trump, Ms Rangi said, there is fear in the US now, with some immigrants not being sure about their future in the US.

In May, President Trump unveiled a new immigration proposal that will, among other things, eliminate the Green Card. The Diversity Visa Programme issues 50,000 green cards annually on a lottery basis to residents of countries with low immigration rates to the US.

In the proposal, the 50,000 permanent resident visas issued annually will instead be reallocated to employment-based applicants.

Mr Trump said the proposal will also limit family-based sponsorship to children and spouses of US citizens. He termed as “dysfunctional and unfair” the current immigration system that involves granting Green Cards on a lottery basis and based on having relatives in the US.

A total of 5,263 Kenyan nationals were granted Green Cards in the first three quarters of 2018, according to the US Department of Homeland Security.

The number included 2,934 individuals already living in the US who adjusted their status and 2,329 new arrivals.

The 5,236 include all classes of admission — including diversity visas/green card lottery winners, immediate relatives of US citizens, family-sponsored preferences, employment-based preferences, and asylum seekers.

Some 6,957 and 6,274 Kenyans were granted permanent resident status in 2017 and 2016, respectively, by the US Immigration and Citizenship Services.

Data from the US State Department indicates that over the years, the number of Kenyans who have tried their luck with the Green Card lottery has been rising.

This includes 317,029 entrants and 125,937 derivatives (spouses and children that entrants included in their application forms).

The electronic version of Ms Rangi’s book is available on Amazon.