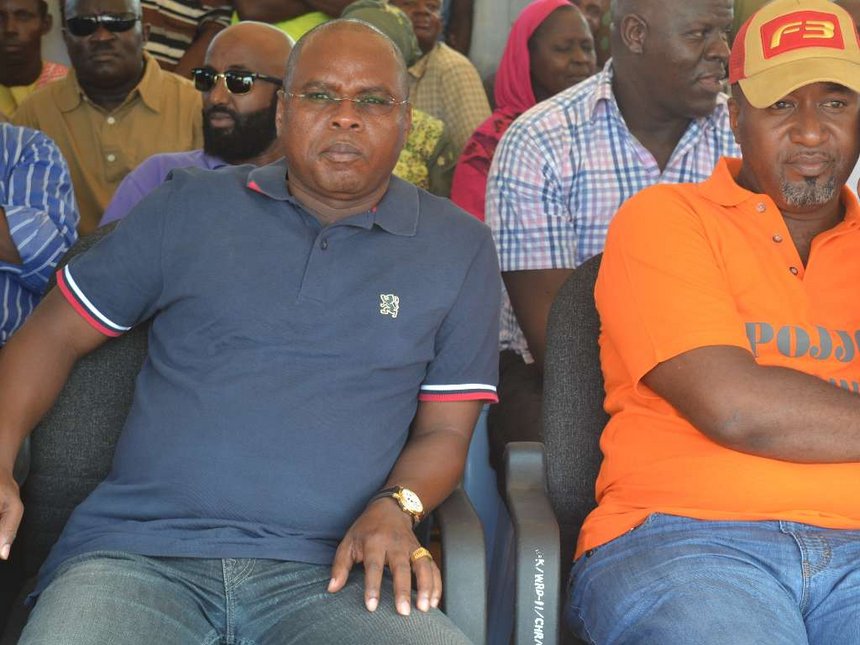 Kilifi governor Amason Kingi and Mombasa governor Hassan Joho at Mwena in LungaLunga kwale on Thursday 10 March 2016 during the homecoming rally for MCA Kassim Pojjo after he was detained at Malindi police station on Friday last week for claims of planning to rig the concluded Malindi By-election. They said threats by the national government of withdrawing their security will not cow them to support Jubilee coalition Photo by ALLOYS MUSYOKA

The political talk doing rounds in the Coast is whether the region should continue voting for ODM and Cord, as it did in 2013; vote for the Jubilee Party or preferably, opt for a regional homegrown party.

The issue of forming a party, in particular, has driven a wedge between the people and their elected leaders. Whereas the majority of Coastal communities desire for a homegrown party, their leaders do not favour this arrangement. For example, Mombasa Governor Hassan Joho is ODM deputy party leader, while Kilifi North MP, Gideon Mung’aro, now supports the Jubilee Party.

In the absence of a local unifying party, ODM and Jubilee are working hard to fill this gap.The Jubilee Party, in particular, is waging a massive campaign to reverse the decade-long ODM political supremacy at the Coast.The impact of this campaign is gradually being felt. For example, ODM and Cord Governors Issa Timamy of Lamu County and Kwale’s Salim Mvurya are reportedly headed to the Jubilee Party.

Other ODM and Cord leaders heading the same direction include Kwale Woman Representative Zainabu Chidzuga, Peter Shehe (Ganze), Khatib Mwashetani (Lunga Lunga), and Mustafa Iddi (Kilifi South). In Mombasa county, former Kisauni MP Anania Mwaboza joins Suleiman Shabaal to contest for the Jubilee Party ticket for the governorship presently held by Hassan Joho. This line-up of who’s who in the regional politics has every reason to worry ODM. It is a party under siege.

Despite these challenges in the Orange party, Jubilee needs to walk extra mile to neutralise the gains it has made in the region. For one, majority of coastal communities associate the Jubilee Party with historical injustices they have suffered over the years. Others have accused it of being less supportive of devolution.

Yet, the ruling party has the opportunity of upstaging ODM in the region in 2017. There is no doubt that Raila Odinga will win the Coast’s presidential votes; however, his party will most likely lose some of the key elective positions it got in 2013.

The reasons for this likely loss of political grip include its unpopular nominations practices, which favour aspirants closer to the party leader, at the expense of all other equally popular party supporters and aspirants. Also, unlike in the last general election when voters overwhelming chose parties, this time round, voters are talking about voting for individuals based on their abilities to deliver, leadership qualities and integrity.

In addition, there is a general disillusionment with the performances of some of the six counties all of which are managed by ODM and Cord governors.

WHY JUBILEE MUST WALK EXTRA MILE TO DISLODGE ODM FROM THE COAST Reviewed by samrack on August 11, 2016 .

Kilifi governor Amason Kingi and Mombasa governor Hassan Joho at Mwena in LungaLunga kwale on Thursday 10 March 2016 during the homecoming rally for MCA Kassim Pojjo after he was detained at Malindi police station on Friday last week for claims of planning to rig the concluded Malindi By-election. They said threats by the national