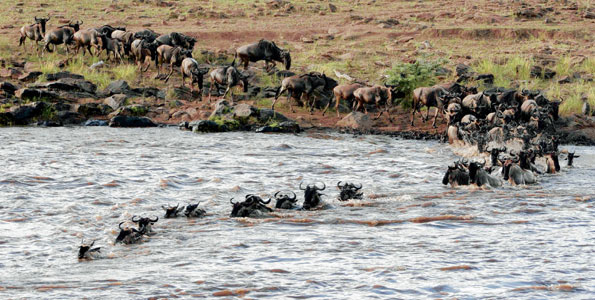 Hotels in the Maasai Mara Game Reserve are recording booming business as tourists flock in to witness this year’s wildebeest migration.

According to a tourism market report, leading lodges in the reserve are fully booked for the season as tourists from different parts of the world stream in to experience the Eighth Wonder of the world at the renowned game reserve.

According to the report, Serena Mara has a bed occupancy of 100 per cent, Sarova Mara has 95 per cent, Ashnil Mara Camp 80 per cent, Keekorok Lodge 98 per cent, Mara Supa 30 per cent and Mara Simba Lodge at 15 per cent.

Other hotels that are benefiting from the upsurge of visitors are Mara Intrepid, Kichwa Tembo, Angama and Governor’s camps.

Most of the lodges and tented camps in the Mara have been fully booked since last month with some of the wildlife loving tourists being forced to look for accommodation in areas around the game reserve. According to Maasai Mara senior warden Moses Kuyoni, they handle between 200 and 300 tour vehicles a day at Oloololo, Musiara, Talek, Sikinani and Oloolaimutia Maasai Mara entrances.

Fully booked up to September

Most visitors are opting for the tented camps in the 16 conservancies outside the Narok County government protected area of the Mara Reserve. The migration began towards the end of June with massive numbers of the animals from the Serengeti National Park in Tanzania crossing the Mara River into the Maasai Mara.

Most of the visitors are from countries not traditionally known as source market for Kenya such as China, Brazil, Japan, Malaysia and Taiwan.
“We have a bed capacity of 99 and we have been forced on a daily basis to book our visitors

Traditional source markets of tourists such the UK, the US, France, Italy and South Africa have not been left behind either, with nationals from the countries also recording impressive numbers.

Chinese tourists visiting the game reserve to witness the wildebeest migration have outnumbered those from the UK, US, Germany and Italy.

Night-bookings at the top 10 lodges in the Mara in July showed the number of Asian visitors hit a 70 per cent mark, more than those from traditional markets in Europe and America.