We will crush any violence, President Kenyatta tells Opposition 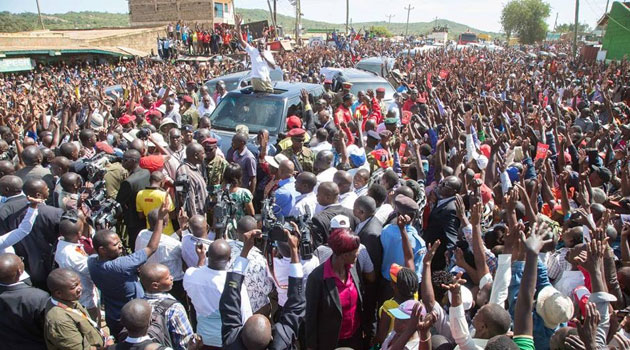 We will crush any violence, President Kenyatta tells Opposition

By PSCU, EMBU, Kenya, Jan 25 – President Uhuru Kenyatta says said the government is ready and able to ensure that no Kenyan is hurt or property destroyed because of elections.

Responding to threats by Raila Odinga and his political allies that they will unleash chaos on Kenyans after the elections, the President said the government is ready to deal with any attempts of violence.

The President said the Opposition was constantly talking about creating chaos in the country instead of focusing on how they can convince Kenyans to vote for them.

“Stop talking of violence all the time and let us compete on policies and leave Kenyans to make their choices,” said the President.

He criticized the Opposition leaders of lacking a vision for the country and instead engaging in crude and vile rhetoric.

The President added that even though the plan by the opposition is to incite Kenyans against each other, the insults they issue every day proves to Kenyans that they are not worthy of leadership.

“Every time you open your mouth you issue crude insults and illogical allegations. This proves to Kenyans that you have no vision for this nation,” he said when he spoke in Kiritini in Embu County.

President Kenyatta who was on a vote sensitization tour, said the Jubilee leadership is not ready to engage in the pettiness that the Opposition is engaging in.

“We are not interested in petty politics. Our aim is to build roads, to improve our schools, to provide electricity and water and all the things that Kenyans need,” he said.

He said those opposing the Jubilee Government have no vision for the country. “Someone who when he wakes up everyday does nothing else but engage in insults and threats has no vision for this country,” said President Kenyatta.

He called on Kenyans to reject those who want to exploit tensions and violence as a political tool.

“Politicians should not make Kenyans to fight each other. Trying to divide Kenyans according to tribes is crude,” he said.

He asked the people of Embu County to register in large number as voters to participate in the elections.

“We have only two weeks before the registration exercise comes to an end. It is the obligation of everyone to get registered as a voter because that is the only way you can ensure the right leaders are elected,” said the President.

Speaking in Siakago, President Kenyatta called on the residents to be ready to vote for MCAs and governors besides voting for the President.

He stopped to speak to the public and also inspected voter registration centres in more centres in the county including Ugweri market, Runyenjes and Mitunduri before finally addressing a rally in Embu Town.

President has already visited at Kirinyaga, Meru, Laikipia, Samburu, Isiolo, Garissa, Muranga and Nyeri Counties as part of his drive to mobilize Kenyans to register as voters.

The President will visit Marsabit County Thursday morning and will be in Tharaka Nithi County in the afternoon.

We will crush any violence, President Kenyatta tells Opposition Reviewed by samrack on January 25, 2017 .

Share thisFacebookTwitterPinterestEmailWhatsAppWe will crush any violence, President Kenyatta tells Opposition By PSCU, EMBU, Kenya, Jan 25 – President Uhuru Kenyatta says said the government is ready and able to ensure that no Kenyan is hurt or property destroyed because of elections. Responding to threats by Raila Odinga and his political allies that they will unleash chaos on