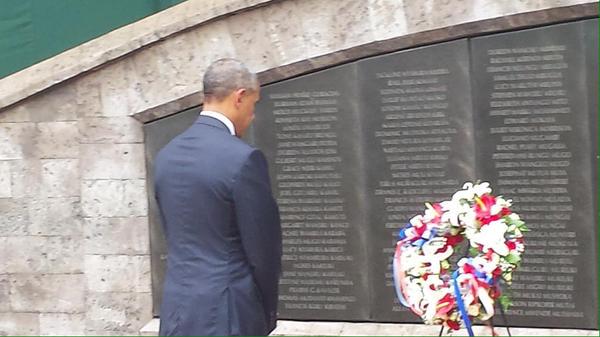 US President Obama bows his head after laying a wreath at Memorial Park on the former site of the U.S. Embassy, where al Qaeda bombed the compound in 1998 killing more than 200 people, in Nairobi.

The park is a symbol of devastation that Osama bin Laden left in the country 17 years ago when he bombed the US Embassy in Nairobi, killing 218 people and injuring at least 5,000 others. For Obama, who last visited the memorial park in 2006 with his wife Michelle and their two daughters, Saturday’s visit will be akin to telling those who died that he fulfilled his promise to promote peace across the world with the killing of Osama four years ago. Following Obama’s orders, Osama was killed in Abbotabad, Pakistan on May 1, 2011 by US Navy Seals. The trip to the Nairobi site took Obama to the noisy junction where Moi Avenue meets Haile Sellassie Avenue, just opposite the bus terminus aptly named ‘Railways’ – after the nearby headquarters of Kenya Railways—where a tranquil garden stands. The park, which is slightly larger than a football field, is filled with trees, lush green grass, a fountain, paved footpaths and a marble plaque engraved with names of the dead. The people whose names are on the plaque died 17 years ago when al Qaeda terrorists bombed the embassy of the United States in Nairobi and Tanzania.
Read more at: http://www.sde.co.ke/thenairobian/article/2000170376/obama-to-visit-al-qaeda-bomb-blast-site-four-years-after-killing-osama

VIDEO:President Obama Heads To The Bomb Blast Memorial Reviewed by samrack on July 25, 2015 .

US President Obama bows his head after laying a wreath at Memorial Park on the former site of the U.S. Embassy, where al Qaeda bombed the compound in 1998 killing more than 200 people, in Nairobi. VIDEO:President Obama Heads To The Bomb Blast Memorial US President Barack Obama Saturday afternoon visited the August 7 Memorial