Uhuru-Ruto marriage on the rocks 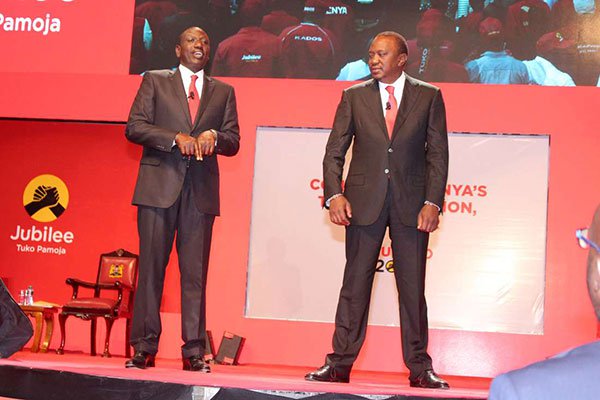 Uhuru-Ruto marriage on the rocks

A church harambee planned to be held in Kapseret, Uasin Gishu County, has laid bare the increasingly growing distance between President Uhuru Kenyatta and his hitherto trusted Deputy, William Ruto.

The harambee is to be presided over by 2013 presidential candidate Peter Kenneth.

But, in an intriguing development, the harambee has sharply split the Jubilee coalition, with a section of MPs who had been invited saying they had received calls from a powerful but shadowy government official known for opposing the DP asking them to boycott the event.

“On Sunday, Peter Kenneth has invited me for a rally he is doing with Oscar Sudi in Eldoret. There is a camp fighting Ruto. So it is telling us we should not set foot in Eldoret on Sunday,” a text message from a senator from Mt Kenya read.

None other than Mr Ruto himself alluded to the campaign to undermine his 2022 bid during a harambee in Githunguri, Kiambu County, on Friday.

Mr Ruto, who has previously downplayed reports that a section of politicians in the Jubilee coalition are opposed to his presidential bid, revealed that he was being targeted through propaganda by some politicians.

“There is an attempt to try and undermine the track record of Jubilee. Therefore, to those peddling propaganda, let them continue; but we will meet with them on the judgement day (2022 elections) and the electorate will decide who is a performer and who is a propagandist,” Mr Ruto said.

Utterances by the top leadership of the Kikuyu Council of Elders, comprising President Kenyatta’s uncle George Muhoho, has not helped diffuse the notion that the Kenyatta-Ruto marriage is on the rocks.

KCE Secretary-General, the Rev Peter Munga, said in a recent interview that an initiative launched last May in Eldoret for Kalenjin and Kikuyu elders to promote Mr Ruto’s 2022 bid stood suspended, and that the council was now focused on building bridges under the aegis of the March 9 handshake between President Kenyatta and his erstwhile arch-rival Raila Odinga.

“It is no longer tenable to go round the country talking about one presidential candidate while others are still (waiting) in the wings,” Rev Munga said.

The latest developments are in stark contrast to the camaraderie displayed by the President and his Deputy throughout the first term.

United by their shared indictments at the International Criminal Court, which had propelled their unlikely alliance that secured victory in the March 2013 vote, Mr Kenyatta and Mr Ruto consistently addressed each other cordially in public and photos of them engaging in hearty handshakes and laughing at each other’s jokes were common.

Mr Ruto seemed to have made a calculation to play second fiddle to Mr Kenyatta from the start and not to challenge him directly, betting that this would put him in a pole position to succeed him in 2022.

In return, Mr Kenyatta acceded to most of Mr Ruto’s demands, including appointing many DP nominees to key positions in the Cabinet and major parastatals.

The matching white shirts and red ties the pair donned when the first Cabinet was announced seemed to signal their intention to build a lasting alliance.

Those days, however, seem to be decidedly in the past.

The body language between Mr Kenyatta and Mr Ruto has been frosty over the past few months, with commentators noting the change of language particularly in the way in which Mr Kenyatta addresses his deputy.

In the first term, the President often called him ndugu yangu William (my brother William) and made a big show of insisting they were singing from the same hymn sheet, including in October 2014 when Mr Kenyatta took the unprecedented step of appointing Mr Ruto acting President when he travelled to The Hague for the hearing of his case.

The new posture between the two men is one of thinly disguised hostility.

During the funeral service for pro-democracy icon Kenneth Matiba, President Kenyatta launched what was viewed by many as an attack on his deputy and his allies, who he said were resisting his efforts to work together with opposition leader Raila Odinga.

In subsequent statements, Mr Kenyatta referred to Mr Ruto as huyu kijana (this young man) and mentioned his habit of kutanga tanga kila mahali (loitering all over the place), a reference to perceptions that Mr Ruto has launched early campaigns for the 2022 election.

When Mr Kenyatta announced that all public officials would be subjected to a lifestyle audit, he merely pointed at Mr Ruto and described him as huyu (this one).

While all these shifts may be viewed as petty chatter, there is a more serious subtext to the emerging cracks within the ruling party.

Kanu Secretary-General Nick Salat, whose party leader Gideon Moi is embroiled in a bitter supremacy tussle with Mr Ruto in the Rift Valley, thinks the DP is responsible for the apparent fissures in Jubilee.

“It is rule of the thumb that you do not attempt to outmanoeuvre your boss. You do not try to make him irrelevant too soon even if in the end you must,” he said.

And added: “The President assured him (Mr Ruto) of his support in 2022 but he immediately embarked on a campaign. It was bound to boomerang on him since the President is keen on leaving a good legacy.”

Deputy Senate Speaker Kithure Kindiki, one of those positioning themselves to be named the DP’s running mate in the 2022 polls, disagrees.

“The DP has been very conscious about his position in Jubilee and government. Never at any time has he competed or tried to upstage the President,” he states.

He downplays the divisions, saying what is happening is characteristic of succession politics.

But he blames opposition leader Raila Odinga for stoking conflict in the ruling party.

“We have the handshake people salivating for Jubilee’s largesse. They are out to upset the political equilibrium,” the senator said.

The clash could already be proving beneficial to the public.

In the last few weeks, the allies of the president and deputy president have engaged in a tit-for-tat campaign of leaking damaging stories about the rival camps, developments which may improve accountability by revealing stories of alleged graft between the two camps.

Mr Kenyatta’s allies appear to be focusing on key parastatals in which Mr Ruto has placed pointmen and where State House figures allege Mr Ruto is drawing financial largesse for his planned presidential campaign.

Mr Ruto’s allies are fighting back. On Wednesday, House Majority Leader Aden Duale tabled a list of companies that were given licences to import sugar.

Several are said to have business relationships with the First Family.

The involvement of families could deepen hostility between the two camps.

After Mr Kenyatta ordered a lifestyle audit of public officials, Kapseret MP Oscar Sudi, a Ruto ally, demanded that the audits should stretch back to the tenure of first President Jomo Kenyatta.

“… the President recently said that there’s a need for lifestyle audit. Everybody should undergo the same including the president, his father Jomo,” he said.

Meanwhile, a 1975 article in the New York Times claiming that the tenure of Kenyatta senior was marred by widespread corruption was widely circulated on social media.

Prof Peter Kagwanja, a governance expert, observes that a relentless war on graft by the President resulting in casualties is bound to see heads roll, with a political price to be paid.

The biggest worry will be the potential for the emerging divisions to test the unity of the Kikuyu and Kalenjin, the two main communities that came together to form the Jubilee Party.

Youths from the two groups were at the heart of the shocking violence which followed the 2007 election, and the unity between their leaders has created an uneasy peace in the Rift Valley.

If the alliance breaks, the potential for trouble in the 2022 election will rise significantly.

An unexpected beneficiary of this battle within the Jubilee Party is Raila Odinga, who has increasingly become a key player in the Kenyatta succession.

Uhuru-Ruto marriage on the rocks Reviewed by samrack on June 24, 2018 .