Uhuru plans law change as Raila digs in on demos 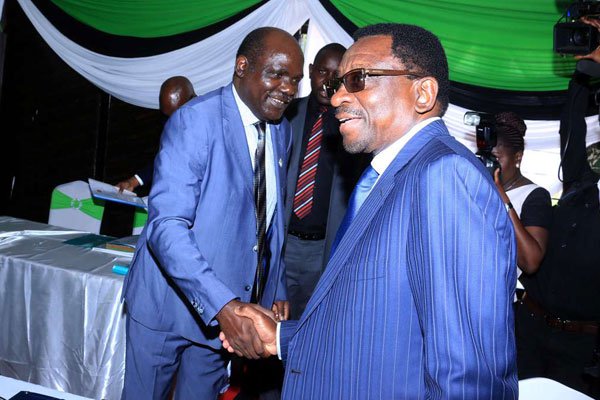 Uhuru plans law change as Raila digs in on demos

A Bill by the Jubilee Party to amend the elections law in Parliament on Wednesday stalled talks between the ruling party and the opposition on preparations for the October 26 repeat presidential poll.

Independent Electoral and Boundaries Commission (IEBC) chairman Wafula Chebukati adjourned the meeting at the Bomas of Kenya, Nairobi to Thursday to allow representatives of President Uhuru Kenyatta and National Super Alliance flag bearer Raila Odinga to consult their leaders on the proposed changes to the elections laws, which one of the members on the Nasa team said “could make our work become zero”.

This came as both sides hardened positions, with Jubilee using its strength in the National Assembly to push through a special meeting of MPs to start the process of changing the Elections Laws (Amended) Act and Nasa leaders vowing to continue with mass protests every Monday and Friday to kick out top IEBC managers before the repeat poll.

They also vowed not to take part in the election until their demands are met.

The government  made it clear that it would not assign security officers to Nasa leaders determined to force changes at IEBC through protests.

As the two sides hardened their positions, Anglican bishops called for national dialogue, while requesting the rival leaders to soften their stances and talk for the sake of the country.

In Europe, UN Conference on Trade and Development Secretary-General Mukhisa Kituyi warned that the stalemate was taking a toll on Kenya’s reputation and credibility and urged President Kenyatta and Mr Odinga to put aside their differences and engage in constructive dialogue.

Wednesday, the IEBC invited the two sides for a meeting on how the fresh election should be conducted after the Supreme Court invalidated the outcome of the August 8 poll.

The three sides met mid-morning under the chairmanship of Mr Chebukati, with each tabling its agenda.

The meeting was, however, postponed to allow the parties to consult their principals for purposes of harmonising the items for discussion.

When the parties reconvened at 3pm, the Nasa team led by Siaya senator James Orengo raised an objection over the draft Bill tabled in Parliament.

Jubilee wants to introduce changes to make the manual tallying and transmission of the results superior to the electronic system.

It is also understood that the Bill will contain a provision for the vice-chairman to act as the boss of the electoral commission in the absence of the chairman. This is meant to provide for situations where the chairman, who is the returning officer for the presidential election, is unable to do his job or resigns.

The Bill also seeks to make it mandatory for the IEBC chairman to have all the Forms 34A and 34B before announcing the result.

According to a source in the meeting, the Nasa team, that included lawyers Norman Magaya and Paul Mwangi, argued that the Bill, if enacted, would have a bearing on the operations and conduct of the repeat poll and must be part of the agenda of the meeting.

“We have not agreed on the agenda because the Nasa team raised issues with the draft Bill which they believe has the capacity to affect the conduct of the election,” Mr Chebukati said.

He added that the meeting could not proceed beyond the preliminary issues because the draft Bill was not among the items on the table.

“We are confident that the issues will be settled for the comfort of all. The commission is ready to moderate and ensure political parties agree on the agenda. This meeting is important because we are aware the country is watching and we are ready to do everything possible to remove bottlenecks that could affect the election,” he said.

In the afternoon, Mr Odinga met a delegation of Maasai leaders at Okoa Kenya offices, Lavington, where he vowed not to take part in the election if IEBC top managers, French firm OT-Morpho, leading mobile phone service provider Safaricom and Dubai-based Al Ghurair Printing were still key players in the October election.

“As long as IEBC, OT-Morpho, Safaricom Ltd and Al Ghurair are in charge of election, nothing will change,” he said and charged that President Kenyatta and his deputy William Ruto were defending the IEBC managers because “the two expected them to assist them win the election”.

“Uhuru and Ruto are defending the IEBC because they know that as constituted, it is the only team that can steal votes for them,” he said.

Uhuru plans law change as Raila digs in on demos Reviewed by samrack on September 27, 2017 .