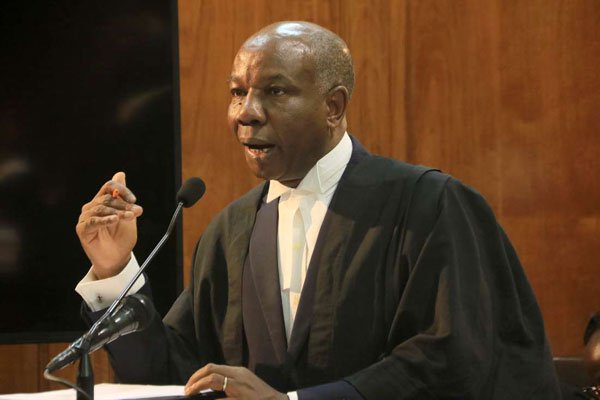 President Uhuru Kenyatta has pleaded with the Supreme Court to ignore calls by Raila Odinga to include rejected votes in the final tally.

Arguing before the judges on Tuesday, lawyer Fred Ngatia urged the court not to overturn the 2013 decision which dealt with the matter conclusively.

He said Mr Odinga had failed to demonstrate why the court should depart from the 2013 case.

“It is a point we argued in 2013, and nothing has changed to make us depart from it. There should be uniformity in the judgments of the court.”

On discrepancies, Mr Ngatia said the numbers Mr Odinga was complaining about are very insignificant to affect the outcome of the poll.

“We lost about 2,000 votes as some were posted to a candidate next to us (Mr Michael Wainaina),” he said.

Mr Ngatia said prior to the polling date, all political parties and Kenyans were informed that 11,000 polling stations would be affected in the transmission of results because of lack of 3G or 4G network.

This meant that the results from the said polling stations would not be streamed instantaneously.

He said voters in those areas were not disenfranchised because they voted and the date captured in forms 34A and 34 B.

The lawyer defended President Kenyatta’s win, saying he received 25 per cent of the votes in 39 counties and the primary documents the court should rely upon are Forms 34A and B and C.

He added that the political contest was conducted in a free, fair and credible manner as captured in reports, released by hundreds of observers, who came into the country to observe the process.

The lawyer played a video showing former US Secretary of State John Kerry, who admitted the process was free, fair and credible.

He laughed off complaints that votes started trickling into the national tallying centre about 7 minutes after the voting was completed.

“They are making a complaint instead of a compliment,” he said, adding that the said results came from Narok Main prison where there were only 10 voters.

Independent Electoral and Boundaries Commission (IEBC) through lawyer Kamau Karori explained, at the insistence of the judges, how possible it was for a voter could ignore five other elective seats and vote for the presidential candidate alone.

According to Mr Karori, the voter has a choice, can decide not to vote for other candidates and stuff the ballots in one box.

This, he explained, would be counted as a rejected ballot.

Share thisFacebookTwitterPinterestEmailWhatsAppUhuru Kenyatta fights Raila Odinga’s call on rejected votes President Uhuru Kenyatta has pleaded with the Supreme Court to ignore calls by Raila Odinga to include rejected votes in the final tally. Arguing before the judges on Tuesday, lawyer Fred Ngatia urged the court not to overturn the 2013 decision which dealt with the