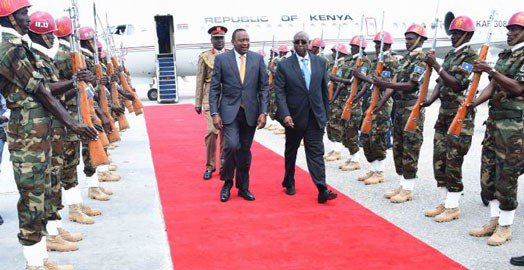 President Kenyatta, who walked through troops in line on arrival at the Aden Adde International Airport in Mogadishu, was received by his host President Hassan Sheikh Mohamoud.

This is the first visit to Somalia by a Kenyan Head of State in three decades.

President Kenyatta and President Mohamoud later held brief bilateral talks at a hotel near the airport ahead of the special IGAD Summit.

The Summit, also attend by Uganda President Yoweri Museveni and Ethiopian Prime Minister Hailemariam Desalegn, will discuss the progress Somalia has made towards entrenching security and stability.

President Uhuru Kenyatta signs the visitors’ book after he arrived in the Somalian capital of Mogadishu as his host President Hassan Sheikh Mohamoud looks on. PHOTO | PSCU

Kenya, Uganda and Ethiopia are among the countries with troops in Somalia.

Share thisFacebookTwitterPinterestEmailWhatsAppUHURU BECOMES FIRST KENYAN PRESIDENT TO VISIT SOMALIA IN 30 YEARS – PHOTOS President Uhuru Kenyatta on Tuesday flew into the Somali capital, Mogadishu, to attend a special IGAD Summit. President Kenyatta, who walked through troops in line on arrival at the Aden Adde International Airport in Mogadishu, was received by his host President