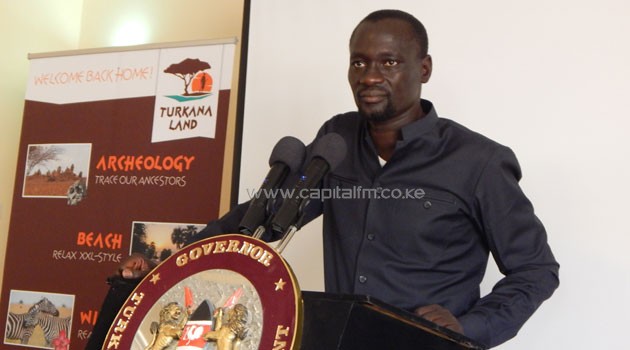 Turkana Governor Josphat Nanok (above) says his government wants the oldest complete human fossil ever excavated, the Turkana Boy, returned to the county in Northern Kenya.
Nanok said his county government plans to establish a museum with the largest fossil collection on the continent and wants the Turkana Boy to be a part of the collection.

“It has no meaning at the National Museum in Nairobi. It was found here and so it should rest here,” he told Kenya’s Capital FM News in an interview.

Nanok said his government was already in talks with the Ministry of Culture and the Arts and the National Museums of Kenya over the proposed museum.

“I’m sure once we erect the museum and they see the Turkana Boy will be properly preserved they’ll have no problem handing it over,” he said.

The fossil museum, Nanok said, was part of his government’s plan to attract tourists to the previously marginalised area.

“We’ve been selling the same thing to tourists for the last 52 years: the Indian Ocean and wildlife but even zoos in Asia have imported wild animals. Selling Turkana as the birth place of man is the key to reclaiming those 1.2 million tourists we’ve lost,” he argued.

The 100 kilometres of untouched, pristine beach surrounding Lake Turkana, he said, is also something his government plans to capitalise on to attract tourists.

“We want to erect a resort city,” he said.

Already, he said, his county government is in the process of completing a monument at the site where the Turkana Boy was dug up.

“It should be ready for unveiling in early March,” he said.

The near lack of access roads, he admitted, however poses a challenge to his lofty plans and to address this, he said, his county government plans on entering into partnership with private entities that can finance the construction.

The county’s water problems, he said, would be resolved by the four aquifers discovered in the county.

“Already my people are reaping the benefits of the Napuu Aquifer with four boreholes already dug and soon we will be conducting a feasibility study to see how much water we need to pump for irrigation, how much power that will require and maybe how much we can contribute to the nation’s needs,” he said.

Insecurity, he said, should also not deter visitors to the county.

“Turkana is 77,000 km2 and only in the areas bordering other nations and the Pokot is there usually a problem but we have taken it upon ourselves to negotiate for peace,” he sought to assure.

The county’s oil deposits aside, tourism and the revenue it generates, Nanok argued, would be key to lessening Turkana’s 94 percent poverty rate.

Share thisFacebookTwitterPinterestEmailWhatsAppTurkana Governor Josphat Nanok (above) says his government wants the oldest complete human fossil ever excavated, the Turkana Boy, returned to the county in Northern Kenya. Nanok said his county government plans to establish a museum with the largest fossil collection on the continent and wants the Turkana Boy to be a part of