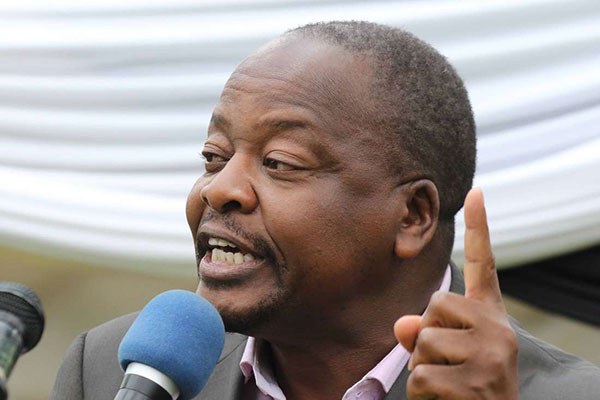 Nominated Cabinet Secretary for Health Mutahi Kagwe is no stranger to the political scene albeit a public service stint which has been on and off over the years.

Should his nomination be approved by Parliament, he will replace Sicily Kariuki who has been moved to the Water and Irrigation docket.

Mr Kagwe was born and brought up in Mukurweini in Nyeri County and went on to attend Kihate Primary School and sat his O levels at Kagumo High School.

After secondary school studies, he moved on to the University of Nairobi where he studied Insurance Law before furthering his education at the United States International University where he undertook a Master’s in Business Administration.

Before debuting on the political scene, Mr Kagwe worked in media, at the Standard Group’s advertising department between 1987 and 1989, while also doing private business.
He rose to the position of commercial director at the media house before launching a small independent publishing house and later on a public relations company.

In 2002, he jumped into politics, becoming Mukurwe-ini Constituency Member of Parliament on a National Alliance Rainbow Coalition (Narc) party ticket. During that term, he served as the Chair of the Parliamentary Committee on Finance, Trade, Tourism and Planning.

His biggest break came in 2005, when former President Mwai Kibaki appointed him to his Cabinet as Minister for Information Communication and Technology (ICT).

It is during his stint as ICT Minister that Kenya ditched satellite technology and embraced Fibre Optic Cables that would see a drastic drop in call tariffs and increase in internet speeds, thus changing how Kenyans communicated with each other and the rest of the world forever.

It was also during his tenure that Safaricom’s M-Pesa was launched, being the first ever mobile money transfer system in the world.

In 2007, he disappeared from active politics after losing his Mukurweini seat to Kabando Wa Kabando. For the next five years, he stayed out of public office but made a comeback in 2013, this time running for Senate on the Narc party ticket.

In 2017, he gunned for the Nyeri gubernatorial seat, battling it out with former Governors Samuel Wamathai and the late Wahome Gakuru for the Jubilee Party ticket.

After being edged out by his opponents, he again put aside active politics after the 2017 defeat.

He would remain largely silent and away from the public limelight for the next two years until October 2019 when he was appointed to the board of the Energy and Petroleum Regulatory Authority (EPRA).

His appointment came at the expense of Dr Macharia Irungu, whose position was revoked by Cabinet Secretary for Energy Charles Keter.

Before Mr Kenyatta nominated him as Cabinet Secretary for Health, his involvement as the masters of ceremonies during a Mt Kenya leaders meeting in Sagana State Lodge presided over by the President sent tongues wagging on whether he was being prepped for another stint in national politics.

Additionally, he was among the senior politicians that Mr Kenyatta opted to sit with at the high table during the high-profile meeting, edging out the younger politicians.

Former Nyeri Senator Mutahi Kagwe. He will replace Sicily Kariuki at the Health Ministry. PHOTO | FILE | NATION MEDIA GROUP This man Mutahi Kagwe Nominated Cabinet Secretary for Health Mutahi Kagwe is no stranger to the political scene albeit a public service stint which has been on and off over the years. Should his