The countries English holidaymakers can travel to without having to quarantine 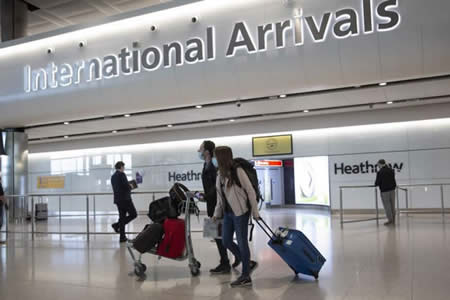 The countries English holidaymakers can travel to without having to quarantine

The government has released a full list of countries English holidaymakers can travel to without having to self-isolate upon their return. Quarantine restrictions for people returning to, or visiting, England from the 59 countries – as well as 14 British Overseas Territories – will be lifted from Friday next week (10 July). Here are 10 of the countries included in the “air bridges”. For a full list, go to the bottom of the page. Germany, Australia, Greece, Spain, Italy, Croatia, Turkey, France, New Zealand, Poland. The United States, Portugal and Sweden are not included on the list. The Department of Transport has said the approved destinations pose a “a reduced risk to the public health of UK citizens” amid the coronavirus pandemic. The requirement for everyone arriving into the UK – bar a handful of exemptions – to self-isolate for 14 days was introduced on 8 June. Under the lifted restrictions, passengers from the approved countries – which will be kept “under constant review” – will still be required to provide contact information on arrival in England.

Anyone self-isolating because they have arrived or returned before 10 July will be able to stop from that date. Transport secretary Grant Shapps said earlier on Friday: “Today marks the next step in carefully reopening our great nation. “Whether you are a holidaymaker ready to travel abroad or a business eager to open your doors again, this is good news for British people and great news for British businesses.” happs said “British” but the rules only apply to England – the devolved administrations of Scotland, Wales and Northern Ireland are to set out their own rules. Shapps added: “The entire nation has worked tirelessly to get to this stage, therefore safety must remain our watch word and we will not hesitate to move quickly to protect ourselves if infection rates rise in countries we are reconnecting with.” Ahead of the publication of the list, the government had come under fire from the devolved administrations over its handling of air bridges. Nicola Sturgeon, Scotland’s first minister, labelled Boris Johnson’s administration “shambolic” over its decision making process, while suggesting Downing Street had not involved Scotland in discussions. Here is the full list of countries from which people can travel to England without having to quarantine from 10 July:

As well as those listed above, the 14 British Overseas Territories will also be exempt from the quarantine measures, according to the UK government website.

The countries English holidaymakers can travel to without having to quarantine Reviewed by samrack on July 3, 2020 .