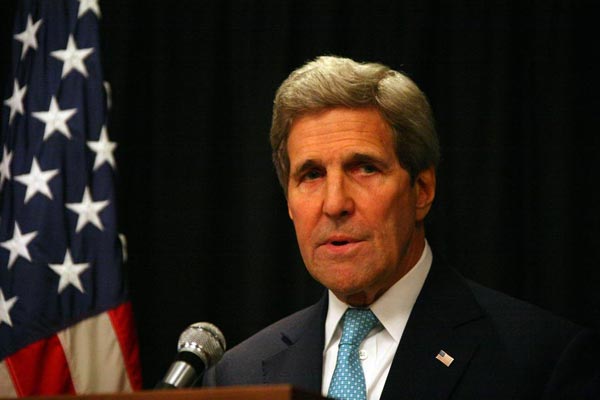 US Secretary of State John Kerry addresses a press conference at the Sankara Hotel in Nairobi on May 4, 2015. All 10 US Congress members from a state hosting thousands of Somali refugees recently urged Kerry to oppose Kenya’s move to shut the Dadaab complex. PHOTO | EVANS HABIL | NATION MEDIA GROUP

All 10 US Congress members from a state hosting thousands of Somali refugees recently urged Secretary of State John Kerry to oppose Kenya’s move to shut the Dadaab complex.

“Should Kenya continue to follow through with the closure, it would threaten the lives of thousands of refugees,” the two US senators and eight representatives from Minnesota wrote in an open letter to Mr Kerry.

“The involuntary repatriation of more than 350,000 refugees is a violation of international law that would cause a humanitarian crisis counterproductive to regional stability,” the eight Democrats and two Republicans added.

“We respectfully urge you to work with the United Nations and regional partners to prevent the closure of Dadaab,” the lawmakers told the top US diplomat.

Minnesota, an upper Midwest state bordering Canada, is home to about 25,000 Somalis — more than one-quarter of the total number living in the United States.

A large majority of Somalis in Minnesota have settled peacefully, with many prospering after starting small businesses or finding jobs with established businesses.

But about three dozen young Somalis are known to have left Minnesota in recent years to join Al-Shabaab or Islamist groups fighting in Syria and Iraq.

Three Somali-Americans who lived in the state were convicted earlier this month on federal charges that they sought to join the Islamic State in Syria.

Secretary of State Kerry has previously said he is “deeply concerned” about Kenya’s pledge to shut Dadaab this year.

“We strongly urge the government of Kenya to maintain its longstanding leadership role in protecting and sheltering victims of violence and trauma, consistent with its international obligations,” Mr Kerry said last month.

“We call on Kenya to uphold these international obligations and not forcibly repatriate refugees.”

Kenyan authorities have said that the nearly 350,000 refugees in the Dadaab camps will not be forced out of the country.

The government has promised to treat them humanely as it presses the UN and donor nations to more vigorously implement a 2013 agreement to facilitate the voluntary return of Somalis to their homeland.

Mr Kerry appeared to play a role in the Kenyan government’s lifting of a threat last year to close Dadaab.

President Uhuru Kenyatta announced shortly after meeting with Mr Kerry in Nairobi in May 2015 that Kenya would not act on an ultimatum that could have resulted in expulsion of Somalis.

Deputy President William Ruto warned in April of last year following the massacre at Garissa University College that if the UN did not relocate Dadaab’s residents within three months, “we shall relocate them ourselves.”

Kenyan officials have claimed that the attack on Garissa, which took 148 lives, was planned by Shabaab agents in the Dadaab camps.

The government has not offered evidence, however, in support of those allegations.

Share thisFacebookTwitterPinterestEmailWhatsAppUS Secretary of State John Kerry addresses a press conference at the Sankara Hotel in Nairobi on May 4, 2015. All 10 US Congress members from a state hosting thousands of Somali refugees recently urged Kerry to oppose Kenya’s move to shut the Dadaab complex. PHOTO | EVANS HABIL | NATION MEDIA GROUP Ten US