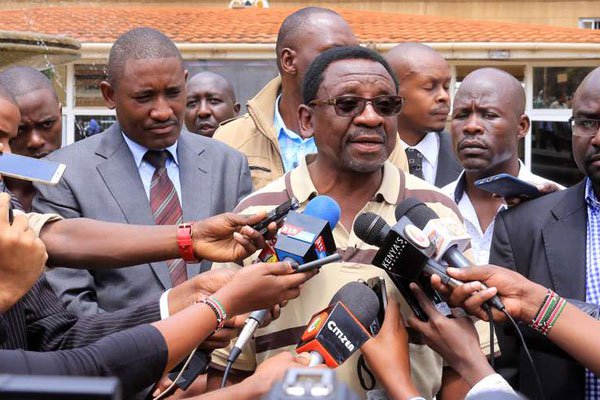 The veracity of forms used to process results of the presidential election will form the core of debate at the Supreme Court when the hearing of Raila Odinga’s petition against the election of President Uhuru Kenyatta kicks off.

And as the court embarks on the second phase of the battle over the presidential election results Saturday evening, the question whether the anomalies cited in the data forms will be enough to alter the vote outcome will be keenly followed.

IEBC SERVERS
Also in question will be whether there was abuse of power by President Uhuru Kenyatta and whether the electoral commission should hand over for scrutiny the 40,883 kits used to identify voters and transmit the results as well as its servers and logs.

The first phase of the petition ended Friday evening with the submission by each of the three parties – Mr Odinga, President Kenyatta and the Independent Electoral and Boundaries Commission – of their written submissions, their arguments in writing.

SABBATH
The second phase begins at 7pm Saturday at the pre-trial conference.

Court proceedings will start late because Chief Justice David Maraga, an Adventist, will be observing the Sabbath.

At the pre-trial conference, the judges will set out what the issues they are to determine are, who else can join the case and what the IEBC is to do with election materials.

The commission has already deposited all the Forms 34A, 34B and 34C but Mr Odinga’s team wants all the kits and the servers and their logs also submitted for scrutiny.

FRAUD
All parties are exuding confidence that they will convince the seven judges of the Supreme Court to rule in their favour.

Nasa, through lawyer James Orengo, said they are ready to demonstrate “monstrous fraud and forgery” that the electoral body committed in the August 8 election, whereas Jubilee through Ahmednasir Abdullahi said they are “bullish and ready” to demolish whatever evidence their opponents have filed.

After submitting their arguments on Friday, Mr Odinga’s legal team said they had found that the entire election transmission platform was compromised in favour of President Kenyatta.

DATA SYSTEM
Mr Odinga has maintained in his submissions that there are massive inconsistencies and inaccuracies between the results as contained in the statutory returns and those conveyed electronically by IEBC.

He alleges that he has seen all Forms 34As brought from the field by his agents and confirms that there is a huge variance of results posted in form 34B and the IEBC portal.

Mr Odinga has also repeated his claims that the elections technology systems was deliberately compromised to tilt the results.

He says the inaccuracies are not accidental or inadvertent but rather widespread and deliberate.

Through a sworn statement by Omar Yusuf Mohamed, Mr Odinga says he will demonstrate how the commission allowed manipulation or access of their data systems and portal so as to process the results being streamed at a location or holding place.

The results, he adds, would later be streamed in and beamed at the national tallying centre at Bomas and national television.

“I have also read his affidavit in respect of how the commission configured or allowed systems to be corrupted so as to inflate the number of rejected votes in a manner that had effect on the number of both myself and Uhuru Muigai Kenyatta,” he says in the application.

The former prime minister says that an analysis by his team reveals that the results being streamed and beamed on TV at the national tallying centre were not the same ones that were counted, tallied, verified, scanned and transmitted from the gazetted tallying centres across the country.

He maintains that the results were computer generated from a “computer algorithm that had an 11 per cent factors marinated throughout the transmission”.

He adds that the elections were predetermined in favour of President Kenyatta, thereby subverting the will of the people of Kenya.

ANOMALIES
During the interlocutory hearing, Mr Odinga’s lawyers will be asking the court to direct IEBC to deliver or grant them access to all servers used during the elections, software and running applications, IP addresses, firewalls, operating systems, location or servers, among other technology.

In turn, lawyers for the electoral commission will ask the court to have Nasa prove its claims about the forms.

IEBC also says that the information entered in the gadgets used to transmit the provisional results was “statistics” and not the actual results.

The commission says in its response to Nasa’s petition that if there were any anomalies in the presidential election, they were not enough to affect the final result.

“The petitioners’ allegations of massive, systematic and deliberate non-compliance with the Constitution and the law in the petition are couched in generalities and misconceived,” IEBC says in the response submitted by its lawyers.

EVIDENCE
From its response, IEBC views a lot of Nasa’s allegations as “vague and stated in generalities, and thus failing to meet the legal threshold”.

While Nasa argues that the Presidential election was so badly conducted and marred by irregularities that it does not matter who was declared the winner, the IEBC says allegations lacked specific evidence.

It however is keen on the allegations regarding the Forms 34A, 34B and 34C, which were some of the most crucial documents in the Presidential election.

IEBC has indicated it would ask the seven judges to ask Nasa to prove its claims that a number of Forms 34B did not indicate the names of returning officers and that they did not bear the IEBC stamp.

NASA’S CLAIMS
It also wants Mr Odinga’s team to be asked for proof that a substantial number of Forms 34A and 34B do not have the signatures of agents or the reason put down for their refusal to sign.

“In any event, the refusal by the agents to sign the said forms does not invalidate the results announced,” IEBC says.

Nasa should also be made to prove that one person was a presiding officer in a considerable number of polling stations in different areas.

The commission explains the procedure used after the counting of votes at each of the 40,883 polling stations, which it says was in line with the decision of the Court of Appeal that results declared at the constituency were final.

KIEMS KITS
After having been used to identify the voters at each station, the Kenya Integrated Election Management Systems (Kiems) kits were used to transmit to Nairobi the results and a scanned image of the Form 34A.

“The statistics entered into the Kiems kits was not the result and is, therefore, not comparable with the results recorded in Forms 34A.

“If there were any discrepancies in the statistics entered in the Kiems kits, which is denied, these would be as a result of inadvertent human error during the transfer of figures from Forms 34A to the Kiems kits.

“The said discrepancies, if any, did not materially affect the outcome of the Presidential election,” the IEBC says.

STATISTICS
IEBC has also denied the claim by Nasa that the data entered in the gadgets was inconsistent with what was filled in the Forms 34A.

“The data entered in Kiems was statistics. The result of the election from each polling station was contained in Forms 34A.

“It is therefore incorrect to compare the statistics entered in Kiems with the results from each polling station as contained in Forms 34A.”

Supreme battle: Issues that could decide petition Reviewed by samrack on August 26, 2017 .

Nasa lawyer James Orengo addresses the media outside the Supreme Court on August 25, 2017 after filing an interlocutory application. PHOTO | JEFF ANGOTE | NATION MEDIA GROUP  Supreme battle: Issues that could decide petition The veracity of forms used to process results of the presidential election will form the core of debate at the