Storm simmers in Jubilee as leaders wear face of tranquility 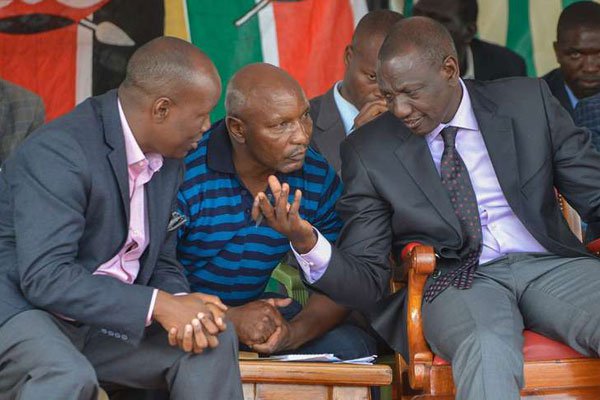 Storm simmers in Jubilee as leaders wear face of tranquility

Beneath the public show of tranquility in President Uhuru Kenyatta’s Jubilee Party, there are renewed cracks along the defunct URP and TNA factions that could only be waiting for the right time to explode as the clock ticks towards the 2022 General Election.

The push by MPs mostly allied to Deputy President William Ruto to impeach Health Cabinet Secretary Sicily Kariuki for having suspended Kenyatta National Hospital chief executive Lily Koros following a surgery mix-up may not be so much an end in itself but rather an avenue to vent out on things some party members feel are not being done the right way.

In fact, a senior government figure told the Sunday Nation that the decision by the Second in Command on Thursday to ask the lawmakers to back off from the motion of no confidence was informed by the need to drown the narrative in sections of the ruling party that they may have been acting on his behalf.

2022 ELECTION
They will not admit it but realignment remains the only permanent feature in our electoral landscape and, as such, there are suspicions only talked about in low tones among politicians coalescing around the two leaders with some of the DP allies feeling that the vote-rich Mt Kenya bloc may turn its back on them in the presidential election when they need it the most.

Nyeri Town MP Ngunjiri Wambugu is among those from the President’s backyard who hold the view that their support for the DP for his State House bid is not a guarantee.

Mr Kenyatta and Mr Ruto have however reassured their supporters that they will work together beyond their current term.

Indeed, Mr Kenyatta maintains that he will be his deputy’s campaign manager.

Despite the show of unity by the duo, there is always a cloud of uneasiness between their allies with subtle threats that failure to reciprocate the support Rift Valley gave to Mr Kenyatta may lead to chaos.

MT KENYA MPS
Perhaps aware of this, the DP has taken a deliberate initiative to court the region’s leaders in the post-Kenyatta era.

In the last four weeks alone, he has separately met MPs from Kiambu and Nyeri counties in a charm offensive of Central Kenya even as he consolidates support across the country.

Whereas TNA was Mr Kenyatta’s party ahead of the 2013 polls, URP belonged to his deputy, Mr Ruto. The two parties folded up to pave the way for Jubilee.

Another event that has exposed Jubilee’s soft underbelly is the arrest and subsequent prosecution of Mr Alfred Keter, the lawmaker from Nandi Hills whose election has since been overturned by the High Court.

The move has triggered “Kalenjin nationalism’ with MPs like Joshua Kutuny (Jubilee) accusing the government of dictatorial tendencies.

Some however blame Mr Keter’s plight on Mr Ruto, saying he was being targeted for his persistent criticism of the government yet he was elected on the ruling party’s ticket.

A few days later, he lost a petition raising loads of suspicions with some seeing the State’s hand in his woes.

“It is a plot to silence him … what will give you a good legacy when you retire is respect for the rule of law,” Mr Kutuny said in a rare show of bravery as Jubilee MPs are not known to take Mr Kenyatta head-on in public.

Most of those who skipped lamented that the Head of State had turned the forums into lecture sessions.

With 170 MPs, 164 elected and six nominated, less than 50 turned up for the meeting at State House.

“We are not children yet we are being treated as such. We cannot have a situation where we are called and a riot act read to us all the time,” one of them said.

Such events are not new in Jubilee. In 2015 Meru Senator Mithika Linturi, then Igembe South MP, sponsored a similar Bill to oust powerful Devolution Cabinet Secretary Anne Waiguru before he was forced to withdraw it in what later turned out to be State intervention to save Ms Waiguru, now Kirinyaga Governor.

Coincidentally, the script is more or less the same. Ms Waiguru had just sacked Mr Kiplimo Rugut from the helm of the National Youth Service (NYS) and the Rift Valley, like is the case at hand, felt shortchanged.

Aldai MP Cornel Serem, the architect of the impeachment move on Ms Kariuki, accuses the minister of arrogance and high handedness, a striking similarity to some of the charges that were levelled against Governor Waiguru.

Silently, they also accuse the DP of not doing enough to protect “their people”.

DEVELOPMENT
The DP recently asked his Jubilee colleagues to stop debate about the next elections, arguing that it was time to get down and work, a call that has largely gone unheeded.

“All leaders, especially those of us in Jubilee, must stop the debate about 2022 for now until the elections come so we can direct our energies and focus on delivering the agenda we sold to Kenyans,” he pleaded.

When Kanu’s Tiaty MP Kassait Kamket a fortnight ago proposed a raft of changes, including re-introducing the powerful position of prime minister, significantly clipping presidential powers, those around the DP read mischief.

They see the hand of their partners in the ruling party in it and that of Baringo Senator Gideon Moi, who is Mr Kamket’s party leader.

They feel that effecting the changes would be tantamount to shortchanging their man at the eleventh hour.

The DP is looking forward to an executive presidency and will entertain nothing short of this.

Like is always the case in competitive politics and with Mr Kenyatta reaching out to his nemesis Raila Odinga on Friday, such suspicions may grow stronger.

Storm simmers in Jubilee as leaders wear face of tranquility Reviewed by samrack on March 11, 2018 .