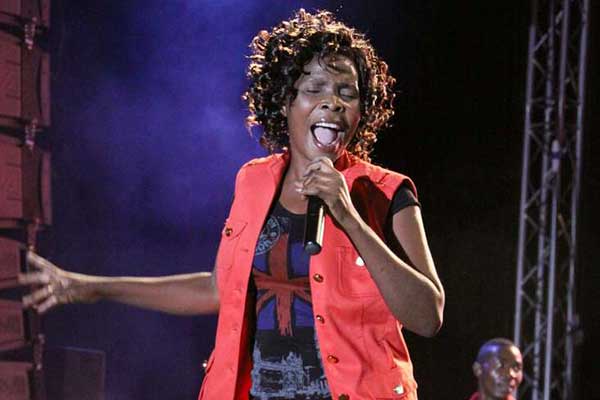 Popular Tanzanian gospel singer Rose Muhando has been trending this week following the emergence on social media of a video clip which has gone viral.

In the clip, a visibly frail Rose, with a bandaged arm, is seen writhing on a church floor as a pastor performs some form of exorcism on her.

In the clip, the singer, known for a string of hit songs, including the immensely popular Nibebe and Utamu wa Yesu, can be heard lamenting and blaming her detractors for her current tribulations.

She also appears to blame them for casting what she refers to as demons on her to block or frustrate her musical career.

There was an outpouring of empathy for the singer with many people sympathising with her for the troubles she has suffered lately.

The singer, who when in good health, is known to dance to her music with unmatched vibrancy, has been rather forlorn and desperate lately.

According to a source, Rose had allegedly sought help from the pastor to give her some spiritual healing for her troubles, which many suspect could be linked to substance abuse and allegations of being “tormented by demons inflicted on her by her detractors”.

According to the source, who sought anonymity, worshippers were surprised at her dramatic appearance at the church.

In the bizarre video, Rose was seen writhing and rolling on the church floor as Pastor Ng’ang’a led her into making startling revelations of her former manager and others, whom she blames for her current tribulations.

“They don’t want me to prosper I have lost all my property including cars, house and land,” she is heard lamenting in the clip.

The same manager she accused has also been in charge of two other leading Tanzanian singers and a Kenyan gospel musician.

The source also confirmed that following the revelation, Ms Muhando has now been taken to a rehabilitation centre in Nairobi.

There was also a possibility of her making another appearance during a thanksgiving crusade by the same church at Uhuru Park in Nairobi.

Speculation has been rife in the past, with the Tanzanian star fighting off allegations of drug abuse which she has often denied.

Her controversial music career has also seen her separated from her children.

She has also have had occasional run-ins with Tanzanian authorities for breaking the law and differing with her producers and show promoters.

In the past, Ms Muhando has also accused some Tanzanian bishops of sexual harassment.

In 2016 she also came out to deny rumours of her death that had filled social media platforms.

The award-winning gospel singer, reportedly born a Muslim in Morogoro, Tanzania, converted to Christianity at an early age.

This she attributed to some of the problems she had undergone in her early childhood.

She built her musical career in Dodoma where she was a member of the Anglican Church.

Some of her other popular songs include Mteule uwe Macho, Facebook and Jipange Sawa Sawa.

For the past one year, not much had been heard of the vibrant musician.

Her only latest recording has been a duet with budding singer Promise Ahadi from Mombasa.

Some of her fellow Tanzanian musicians and fans this week also joined the clamour to have Ms Muhando returned home to undergo treatment and rehabilitation.

Share thisFacebookTwitterPinterestEmailWhatsAppSinger Muhando’s ‘exorcism’ clip leaves many shocked Popular Tanzanian gospel singer Rose Muhando has been trending this week following the emergence on social media of a video clip which has gone viral. In the clip, a visibly frail Rose, with a bandaged arm, is seen writhing on a church floor as a pastor performs