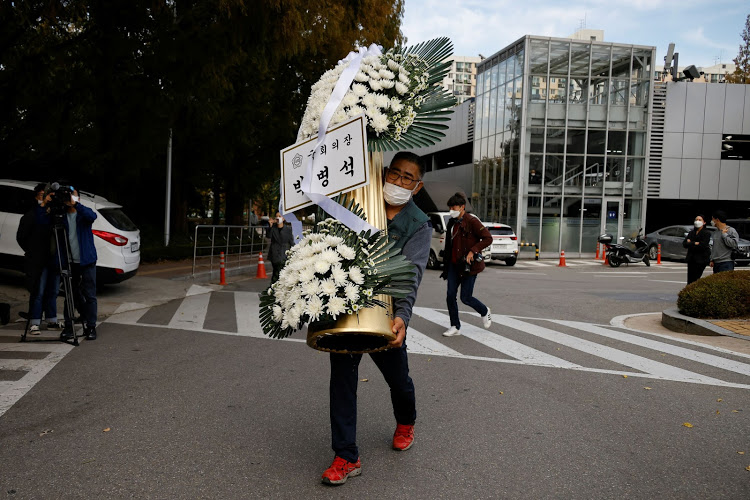 A wreath of flowers from South Korea’s National Assembly Speaker Park Byeong-seug is carried by a worker outside a funeral parlor where the funeral of Lee Kun-hee, leader of Samsung Group, will take place, in Seoul, South Korea, October 25, 2020.Pic Photo Courtesy

Lee Kun-hee, who built Samsung Electronics into a global powerhouse in smartphones, semiconductors and televisions, died on Sunday after spending more than six years in hospital following a heart attack, the company said.

The charismatic leader of Samsung Group and the country’s richest person, grew it into South Korea’s biggest conglomerate. But he and the empire he built have also been vilified by critics for wielding huge economic clout, and for opaque governance and dubious transfers of the family wealth.

Lee Kun-hee, who built Samsung into a global technology giant and was convicted — and pardoned — twice for white-collar crimes, has died at 78. https://t.co/btOzkyVwUB

“Lee is such a symbolic figure in South Korea’s spectacular rise and how South Korea embraced globalisation, that his death will be remembered by so many Koreans,” said Chung Sun-sup, chief executive of corporate researcher firm Chaebul.com

Lee, who was 78, is the latest second-generation leader of a South Korean family-controlled conglomerate, or chaebol, to die, leaving potentially thorny succession issues for the third generation.

Lee’s “innovative leadership and indomitable spirit should be highly regarded in any era and in any field,” ruling party leader and former prime minister Lee Nak-yon wrote on Facebook. “But it can’t be denied that he reinforced chaebol-led economic structure and failed to recognise labour unions.”

The death of Lee, with a net worth of $20.9 billion according to Forbes, is set to prompt investor interest in a potential restructuring of the group involving his stakes in key Samsung companies such as Samsung Life and Samsung Electronics.

Lee owns 20.76% of the insurance firm and is the biggest individual shareholder of Samsung Electronics with a 4.18% stake.

The younger Lee served jail time for his role in a bribery scandal that triggered the impeachment of then-President Park Geun-hye. The case is on appeal. A separate trial on charges of accounting fraud and stock price manipulation kicked off this month.

“With Lee passing, Samsung Group is now facing the biggest governance shakeup since the merger between Cheil Industries and Samsung C&T” in 2015, said Ahn Sang-hee, an expert in corporate governance at Daishin Economic Research Institute.

“For Jay Y. Lee, getting the most of that stake Lee Kun-hee holds is more important than ever,” Ahn said. “The key here is with taxes. Coming up with enough taxes related to that inheritance and avoiding possible disputes with his sisters are the major hurdles.”

It remains unclear how the elder Lee’s three children will split his wealth, an issue that has led to family feuds at other chaebols in recent years after the death of their patriarchs.

“It has been six years since Lee was hospitalised, so if there is a consensus among the children, Samsung will go through an orderly succession. If not, there is a possibility of a feud,” said Park Sang-in, a professor at Seoul National University.

“With Lee’s death, Samsung now faces greater uncertainty over the inheritance,” he said.

Lee died with his family by his side, including Jay Y. Lee, the Samsung Electronics vice chairman, the conglomerate said.

“Chairman Lee was a true visionary who transformed Samsung into the world-leading innovator and industrial powerhouse from a local business,” Samsung said in a statement.

The company did not specify the cause of death and declined to comment on whether Lee left a will.

Lee helped grow his father Lee Byung-chull’s noodle trading business into a sprawling powerhouse with assets worth some $375 billion, with dozens of affiliates stretching from electronics and insurance to shipbuilding and construction.

“His legacy will be everlasting,” Samsung said.

A wreath of flowers from South Korea’s National Assembly Speaker Park Byeong-seug is carried by a worker outside a funeral parlor where the funeral of Lee Kun-hee, leader of Samsung Group, will take place, in Seoul, South Korea, October 25, 2020.Pic Photo Courtesy Samsung chairman Lee Kun-hee dies at 78 •Lee built Samsung Elec into