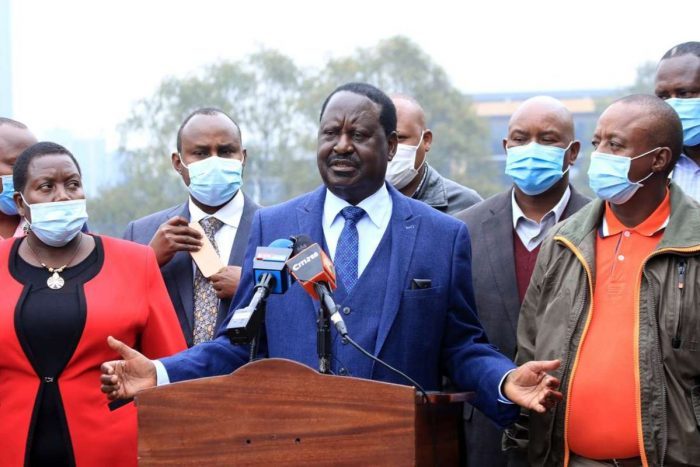 ODM leader Raila Odinga addresses the media at his Capitol Hill office in Nairobi on September 8, 2020 after a meeting with Maa community leaders from Kajiado County.Pic Photo Courtesy

ODM leader Raila Odinga on Saturday announced that campaigns for the Building Bridges Initiative (BBI) will resume next week to prepare the country for a referendum.

Mr Odinga said the campaigns, which were slowed down because of the Covid-19 pandemic, will kick-off in earnest immediately after the report is released for the public to read and fully understand.

He asked the country to prepare for gruelling campaigns in favour of the BBI report and urged his supporters to get ready to support the recommendations of the Senator Yusuf Haji-led team.

The country has been waiting for the report to be made public by President Uhuru Kenyatta and Mr Odinga who put together the BBI team after the handshake.

This translates to, “We just put the campaigns (dubbed reggae) on hold but didn’t suspend the drive altogether. We were on half-time so that the players can rejuvenate. Now we’re coming back with the BBI. We are likely to come back even next week.”)

Mr Odinga, who was not accompanied by any of the elected leaders from Siaya, said it is only through the initiative that the country will fix what has been ailing it since independence.

“If we don’t change how we play our politics, then we risk remaining behind for the next 50 years. We must deal with corruption and fix unemployment among the youth. The ills of independence that have seen us lag such as illiteracy, ethnicity and poverty will only be addressed if we adopt the report of the BBI, “ he said.

Mr Odinga said he decided to work closely with the President after the last General Election on the realisation that the country needed to fight against skewed allocations of resources and all forms of discrimination that had seen some parts of Kenya marginalised.

The ODM leader at the same time lashed out at Deputy President William Ruto whom he told to stop describing himself as a hustler.

He accused the DP of presenting himself as a poor person in an attempt to create a class war in the country while in reality, he was wealthy.

“You can’t tell the country that this is a war between the poor and the rich while you know you have acquired illegal wealth stashed abroad,” said Mr Odinga.

Without making direct reference to the Deputy President, Mr Odinga claimed that Dr Ruto had built five-star hotels and luxurious homes through questionable means and must stop misleading the country that he is poor.

“Why would you move around the country calling yourself a hustler when you own five choppers? Then you give youths wheelbarrows when they are not even contractors. How will such donations help them?” he posed.

The Opposition leader said his intention and that of the President was to get lasting solutions to the problems facing the country through BBI and not through tokenism.

Mr Odinga, at the same time, warned the country against dropping its guard on the fight against Covid-19 pandemic if Kenya is to escape the second wave of the virus.

Mr Odinga warned that the gains made so far might be lost in the second wave of Covid-19. He advised Kenyans to adhere to the containment measures strictly.

“The virus has killed many people. It can still spread of we fail to observe the Ministry of health Protocols. We are yet to get the green light to drop our guard,” he said.

Mr Odinga said it was early to assume that Kenya was safe from Covid-19, adding that it is only after a vaccine is obtained that the citizens would be out of danger.

“We can’t relent on observing the health protocols put in place to contain the spread of Covid-19. This disease is still with us. We must continue to be on the lookout, “ he said.

The country has relaxed some of the tough measures put in place early in the year, which included a dusk-to-dawn curfew and lockdown of hot spot counties such as Nairobi and Mombasa.

Kenya also eased restrictions such as the number of people allowed in churches, wedding and funerals. To open up the economy, President Kenyatta partially opened bars and restaurants and extended curfew hours.

Raila sets the stage for BBI drive Reviewed by samrack on October 18, 2020 .

Share thisFacebookTwitterPinterestEmailWhatsAppODM leader Raila Odinga addresses the media at his Capitol Hill office in Nairobi on September 8, 2020 after a meeting with Maa community leaders from Kajiado County.Pic Photo Courtesy Raila sets the stage for BBI drive What you need to know: Mr Odinga said the BBI campaigns, which were slowed down because of