President Kenyatta calls for peace ahead of polls 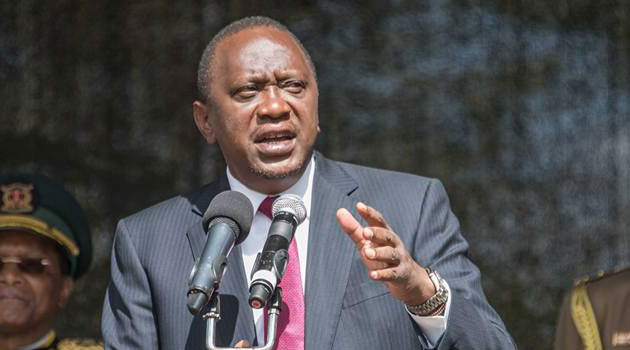 President Kenyatta calls for peace ahead of polls

The President told Kenyans to uphold the values of nationhood and patriotism which are key to the country’s stability.

He challenged those vying for political seats to do so without inciting wananchi as they go around seeking votes.

“When leaders come seeking votes from you, don’t allow them to incite you to start fighting one another. Reject such politicians who neither mean well for you or for the country,” President Kenyatta said, “Don’t allow yourselves to be used as weapons to fight their battles.”

Kenya plunged into chaos after the disputed Presidential election of 2007, leading to deaths of 1,100 people and displacements of half a million more.

The International Criminal Court later indicted six Kenyans—including President Kenyatta, his Deputy William Ruto—for alleged roles in the violence but their cases did not last at The Hague-based court due to lack of evidence. They were subsequently dropped.

The President who spoke Tuesday when he addressed parents, guardians and well-wishers who attended the National Youth Service (NYS) recruits passing out parade in Gilgil urged all Kenyans to emulate the youth who live and work together peaceful in their colleges irrespective of their backgrounds.

“The youth, coming out from all corners of the country, live together and shared everything together they have as they train in colleges but the same cannot be said of the old generation who still think about tribe. We have to change that negative approach to life now,” the President said.

The Head of State said through unity of purpose Kenyans can achieve much in terms of development and economic growth.

“Unity is the only way through which we can prosper, tribalism and divisions cannot feed, create jobs or allow businesses to thrive. Our patriotism is what will help us progress in life,” said the President.

He also called on Kenyans to be wary of politicians who are out to cause violence and urged them to ignore such leaders whose agenda is only to serve their narrow selfish interests.

President Kenyatta further assured Kenyans that all those involved in pilfering resources earmarked for the youth will be held accountable.

He said the NYS empowerment programme has transformed lives of many young Kenyans and he would not allow anybody to interfere or derail the programme, saying it has trained over 100,000 youths who are now conducting businesses throughout the country.

The President also noted that through the Savings and Credit Cooperative Organizations (SACCOs), the youth have been able to mobilize Sh1.4 billion in savings.

President Kenyatta calls for peace ahead of polls Reviewed by samrack on December 21, 2016 .

Share thisFacebookTwitterPinterestEmailWhatsAppPresident Kenyatta calls for peace ahead of polls GILGIL, Nakuru County, Dec 21 – President Uhuru Kenyatta has urged Kenyans to maintain peace as the country gears for elections next year. The President told Kenyans to uphold the values of nationhood and patriotism which are key to the country’s stability. He challenged those vying