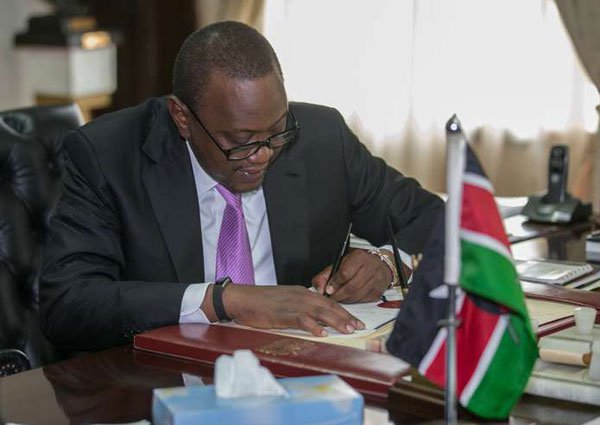 President Uhuru Kenyatta has assented to the Computer and Cybercrimes Bill, 2017.

The assent comes amid calls for the president to revert the law back to Parliament to ensure its provisions are constitutional and do not violate the right to media freedom and expression.

Last week, the Committee to Protect Journalists (CPJ) urged President Kenyatta not to assent to the bill, saying it stifles press freedom.

“Kenyan legislatures have passed a wide ranging bill that will criminalise free speech with journalists and bloggers likely to be the first victims if signed into law,” said CPJ’s Africa Coordinator Angela Quintal in New York.

According to clause 12 of the law, publishing of a false or fictitious information will attract a Sh5 million fine or a two-year jail term.

“A person who intentionally publishes false, misleading or fictitious data or misinforms with intent that the data shall be considered or acted upon as authentic, with or without any financial gain, commits an offence and shall, on conviction, be liable to a fine not exceeding five million shillings or to imprisonment for a term not exceeding two years, or to both,” reads clause 12 of the new law.

A clause introduced in the bill by the National Assembly Majority Leader Aden Duale extends the jail term to 10 years if the false information is calculated to cause panic chaos or violence.

Kenya Editors Guild in response to the signed bill said it has reservations on the Act’s intended criminalisation of the publication of false and fictitious information, which may be abused by state authorities to curtail media freedom.

“When the public’s right to know is threatened, and when the rights of free speech and free press are at risk, all of the other liberties we hold dear are endangered,” tweeted the Kenya Editors Guild.

Former Law Society of Kenya chief executive Apollo Mboya said the context of ‘false information’ will give the authorities a free opportunity to gag the media.

The new law also allows authorities to search and seize stored computer data, and to collect and intercept data real-time.

Computer hackers face a fine of Sh5 million shillings or a three-year jail term or both for unauthorised access, interference, interception, and disclosure of passwords and cyber espionage.

Cybersquatting is defined by Google as the practice of registering names, especially well-known company or brand names, as Internet domains, in the hope of reselling them at a profit.

Online Oxford Dictionary defines phishing as the fraudulent practice of sending emails purporting to be from reputable companies in order to induce individuals to reveal personal information, such as passwords and credit card numbers.

The Act establishes the National Computer and Cybercrimes Coordination Committee and facilitates international co-operation in dealing with computer and cybercrime matters.

President Kenyatta assents to Cybercrimes bill amid protests Reviewed by samrack on May 16, 2018 .