by samrack
in Diaspora, Kenya, News
A A
0

President Uhuru Kenyatta congratulates DP WIlliam Ruto after he was confeered with at PhD at University of Nairobi,looking on is Rachel

Deputy President William Ruto has finally graduated from University of Nairobi with a doctorate, and he has taken to social media to celebrate his new achievement.

Ruto, who enrolled for the doctorate program back in August 2012, was expected to graduate in 2016 but he did not meet the course requirements.One year later, with hard work and determination, he finally got the chance to walk at his graduation ceremony. 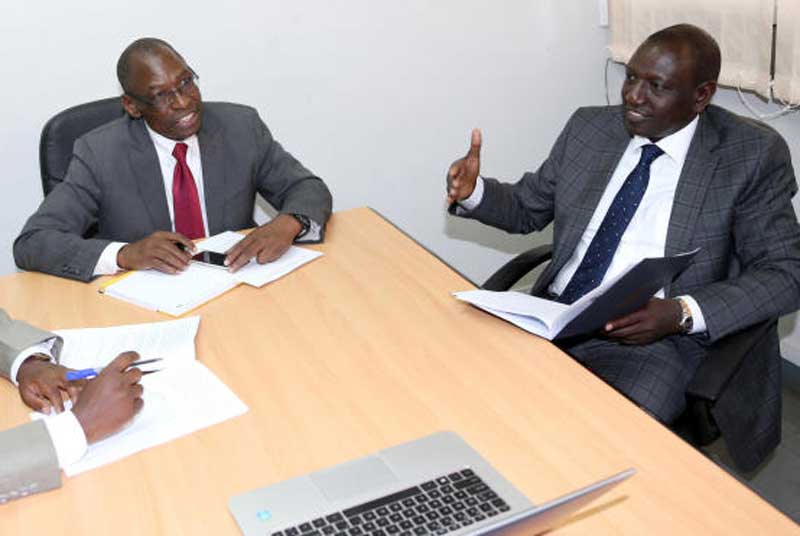 Deputy President William Ruto and his supervisor Professor Jenesio Kinyamario when he presented his PhD progress report to the Director of School of Biological Sciences, University of Nairobi. [File, Standard]

“It has taken God’s divine will; painstaking work; maintaining a delicate balance between a hectic schedule and research to add to my academic honors. For many, it would have been easier to give up.“In the end, perseverance; hard work; devotion; dedication; sacrifice and God’s timing have triumphed. Elated to graduate with a PhD in Plant Ecology from the University of Nairobi,” he wrote on his Facebook.It was all smiles as Ruto sat with his classmates, chatting and taking ‘selfies’ as they waited for the conferment.

The ceremony was delayed until President Uhuru Kenyatta arrived. When he arrived at 12.20pm, it was triple blessings for the deputy president who also marked his 52nd birthday as well as his 27th wedding anniversary.

When the DP stepped to the dais to be conferred, President Uhuru Kenyatta was among the first people to congratulate him.”Congratulations to you my brother William Samoei Ruto on your graduation with a Doctorate degree from the University of Nairobi. You have come a long way to achieve this great milestone. Also, Happy Birthday to you, and Happy Anniversary to you and Mama Rachel Ruto God bless your family,” President Uhuru said.

Among other guests in attendance were DP’s wife Rachel Ruto, who hugged and congratulated him as the crowd applauded the two, Youth and gender Affairs Cabinet Secretary Prof Margaret Kobia and Elgeyo Marakwet Senator Kipchumba Murkomen.

SEE ALSO :Science versus humanities: What if Ruto was right?

Ruto started his schooling at Kerotet Primary School before joining Wareng Secondary School for his O’Levels. He proceeded for his A’levels at Kapsabet Boys in Nandi.

Ruto holds a Bachelor’s degree in Botany and Zoology from the University of Nairobi. He graduated in 1990 and a Masters in Plant Ecology in 2011.

Ruto has been pursuing the doctorate since 2012 at the University of Nairobi. He submitted his thesis titled Influence of human activities on land use changes on environmental quality of riparian ecosystems: A case study of Saiwa Swamp watershed, Western Kenya’ in September 2018.As required by the Commission for University Education, the DP published his work in academically-reputable journals, in his case, the International Journal of Research in Environmental Science and the Asian Journal of Water, Environment and Pollution.He submitted the thesis in September, six years after his project was approved in August 2012. He defended his thesis on October 2 and his research was approved the following day.