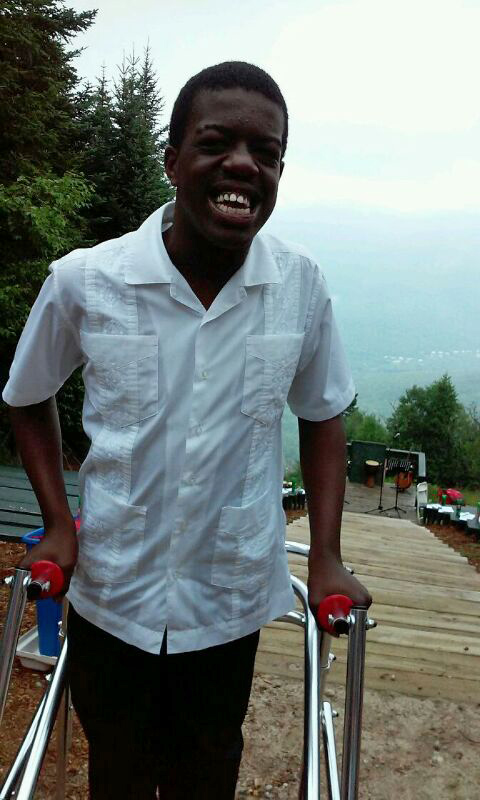 Nicholas and those who care about him have reason to give thanks to God for his sixteenth birthday back in December 2011. As explained by the displays in the back of the church documenting Nicholas’s life, he is truly a miracle. On December 2nd, 1995, he was born diagnosed with cerebral palsy. The doctors told his mother, Esther Karinge, he would not hear, or speak, or walk. They told her he would not live very long. “What they did expect me to do, then,” said the walking, talking, hearing, and prophesying teen. While Preaching, He kept asking the thundrous crowd “Why am i the only one Excited Here? ”

Not only has he lived, he has thrived, and used his gift of life to bless those he comes in contact with. The sophomore at Lexington Christian Academy began a retreat ministry two years ago, and is even considered as “Pastor Nick” to some. It is no question that his young man is blessed.

For a birthday, a lot of effort went into the night. Nicholas and his mother, had prayed for the night for a whole year. They also held rehearsals for the band, and invited the 200 plus people, some from as far as Maryland where his godfather is from.

The event MC was Amos Wangombe,of Springstar Consulting.The Celebrations began at 2pm, and went on to around 9Pm, consisting of personal messages from Nicholas’s family, friends, god parents, former Sunday school teachers, spiritual mentors, and many more. One speaker, Mercy Kamau,Co-Director: Kenya Heart and Sole: The Afya Njema Project.
President: Health For Nations, Inc.University of Massachusetts Boston, College of Nursing and Health Sciences,referred the book, “7 Habits of Highly Effective Teens” and explained how Nicholas exhibited each of the habits. The Rapture Harvest band ushered the festivities with lively praise and worship. Nicholas even joined them with the African drum.

Near the end of the night, Nicholas cut a cake in the shape of a Bible and a guitar and fed his guests. Then he called up the youth, and prayed for them.

“Do not give up on what God has called you to do,” he encouraged them.

Afterwards, the youth in the crowd, Nicholas included, were ready to break it down with Robert “DJ Fresh” Ndungu on the turntables.”We had to invite the youth,” said Esther. “That’s where his passion is.”

Nicholas and those who care about him have reason to give thanks to God for his sixteenth birthday back in December 2011. As explained by the displays in the back of the church documenting Nicholas’s life, he is truly a miracle. On December 2nd, 1995, he was born diagnosed with cerebral palsy. The doctors told