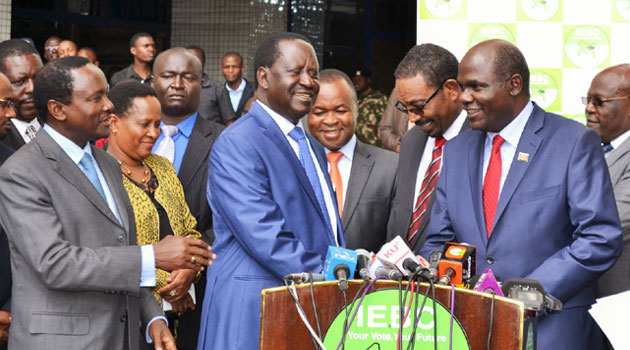 By JOSEPH MURAYA, NAIROBI, Kenya, Apr 6 – The Independent Electoral and Boundaries Commission now says the Opposition can have a parallel centre for purposes of monitoring, tallying and verifying election results for internal use.

IEBC Chairperson Wafula Chebukati however says it’s only IEBC which has the mandate to announce and declare the results of an election.

“Parties recognise that it is the mandate of the IEBC to announce and declare the results of an election. However, political parties and media may monitor, tally and verify the results for the own internal use,” he stated.

He made the announcement on Thursday after meeting National Super Alliance (NASA) principals led by Raila Odinga and Kalonzo Musyoka, who all declined to make any statement to journalists.

“We shall work with other State agencies to maintain law and order. If someone announces results which are not correct then that is a recipe for chaos and we do not want that to happen as a country,” cautioned Chebukati.”

“I believe if that happens, the law will take its course.”

Odinga who has constantly alleged that the 2013 election was rigged in favour of the ruling party, claimed that the Elections Laws Amendment Act of 2016 provided for the announcement of results at three levels – the polling station, constituency and national – urging supporters to ‘adopt’ a polling station to ensure that happens.

“You have registered enough. What we want is that in all polling stations we have committees of 50 youths each then they communicate to us through video conferencing and keep us posted on who has voted and who has not,” he said at a political rally in Kibra on April 3.

Another key issue discussed was the ongoing auditing of the voter’s register, where they agreed that KPMG will engage stakeholders in the process.

“This will ensure that everyone is on board during this critical process,” he stated.

They also discussed the number of agents political parties shall deploy in polling stations according to the law.

“Parties welcomed the commission’s initiative to set up a platform for regular engagement with political parties through the Political Parties Consultative Forum to be chaired by the Chairperson of the Commission,” the IEBC Chairperson said.

Only IEBC to announce poll results, Opposition can monitor, tally outcome Reviewed by samrack on April 7, 2017 .

Share thisFacebookTwitterPinterestEmailWhatsAppIEBC Chairperson Wafula Chebukati however says its only IEBC which is mandated to announce and declare the results of an election/MOSES MUOKI Only IEBC to announce poll results, Opposition can monitor, tally outcome By JOSEPH MURAYA, NAIROBI, Kenya, Apr 6 – The Independent Electoral and Boundaries Commission now says the Opposition can have a parallel centre